King of the Nomes

Ruling over his Nome people.

Take over the magic realm of Oz.

The Nome King is the main antagonist from The Wizard of Oz books by the late L. Frank Baum.

The Nome King is the violent, tyrannical ruler of the Nomes (sometimes spelled "Gnomes"). He is the only villain in the series to ever come close to being the main antagonist. He appeared in countless novels and the Disney film Return to Oz, as the archnemesis to Dorothy Gale and the other heroes.

The Nomes hide jewels and precious metals in the earth and the Nome King, like his people, resent the "upstairs people", who dig for those valuables.

The Nome King is also sometimes called the Metal Monarch, but his given names are Roquat of the Rocks, Roquat the Red, and later, Ruggedo. Like all Nomes, he is immortal unless touched by the egg of any bird, especially a hen, though no two books agree on how long an egg would take to destroy him.

In The Life and Adventures of Santa Claus, a Gnome King provided Santa Claus with steel runners for his sleigh and sleigh-bells for the reindeer, in return for a collection of toys for his children. He was part of the Council of Immortals, who bestowed upon Santa Claus the Mantle of Immortality, and was the first to cast his vote. Whether this was the same King who appears in the Oz series, or possibly his predecessor, remains in doubt.

In Ozma of Oz, Roquat of the Rocks purchased the Royal Family of Ev from King Evoldo in exchange for a long life, and turned them into pieces of bric-a-brac to decorate his home. Princess Ozma, Dorothy Gale, and a party from the Emerald City freed the royal family and, for good measure, took away his Magic Belt.

In The Emerald City of Oz, Roquat, to take revenge, had his subjects dig a tunnel under the Deadly Desert while his General Guph recruited a host of evil spirits to conquer Oz; but Roquat tasted the Water of Oblivion and forgot his enmity and his name.

In Tik-Tok of Oz, He returned to the Nome Kingdom and took a new name, Ruggedo. Later, he enslaved the Shaggy Man's Brother, a miner from Colorado. The Shaggy Man, with the help of Betsy Bobbin, the Oogaboo army, and some of Dorothy's old friends, came to his rescue and Ruggedo dropped them down the Forbidden Tube through the Earth. Quox the dragon, who accompanied them back, conquered Ruggedo using an enchanted ribbon to deprive Ruggedo of all his magic, knowledge, and power. Ruggedo was forced into exile and his former chamberlain, Kaliko, was installed as the new king.

In The Magic of Oz, Ruggedo recruits the rogue Munchkin Kiki Aru to use a magic word which can transform anyone into anything to conquer Oz, but is thwarted by the Wizard of Oz and forced to drink from the Water of Oblivion again.

After L. Frank Baum's death, the Nome King continued to appear in many of the Famous Forty Oz books by Ruth Plumly Thompson, even getting his own book (The Gnome King of Oz). In spite of having his mind erased many times, he soon recovers his desire for revenge, and becomes larger and more powerful. His final appearance in the series is in Handy Mandy in Oz, in which after an unsuccessful attempt to team up with the Wizard Wutz to conquer Oz by stealing its most powerful artifacts, he is transformed into a potted cactus.

He has appeared in unofficial continuations of the Oz series since.

He is an enduring enemy of the characters of L. Frank Baum's Oz books. Although the Wicked Witch of the West is the most famous of Oz's villains (as in the popular 1939 film The Wizard of Oz), the Nome King is the closest the book series has to a main antagonist.

In Rinkitink in Oz, the king of the Nomes is Kaliko, Ruggedo's former chamberlain; he behaves much like his former master, at least in this book, which is a revision of a lost 1905 novel titled King Rinkitink, which, had it been published, would have been the original character's debut.

The character called the Nome King was originally named Roquat of the Rocks in Ozma of Oz, then Roquat the Red in The Emerald City of Oz. He later took the name Ruggedo, which Baum first used in a stage adaptation. Even after Ruggedo lost his throne, he continued to think of himself as king and the Royal Historians (the authors of the series) politely refer to him that way. Authors Ruth Plumly Thompson and John R. Neill used the traditional spelling "gnome", so Ruggedo is the title character in Thompson's The Gnome King of Oz.

The Nome King appears as a gnome-like bearded monarch and he is one of the many villains in the 1986 cartoon series, The Wonderful Wizard of Oz.

The Nome King was portrayed on film by Nicol Williamson in 1985's Return to Oz, based loosely on the books, Ozma of Oz and The Marvelous Land of Oz.

He found Dorothy's Ruby Slippers after they fall on his mountain; and with them, conquered the Emerald City, turning its inhabitants into stone, with the exception of the Scarecrow, who he captured. When Dorothy, Tik-Tok, Jack Pumpkinhead, and the Gump arrived at his mountain, the Nome King transformed the Scarecrow into an ornament. He told Dorothy that the emeralds of the City were originally his until the Scarecrow stole them from him, but she knew he was lying because the emeralds were there before the Scarecrow became king. The Nome King had them all play a guessing game with each of his ornaments to see which one the Scarecrow was; in which if they guessed right, the Scarecrow would be restored, but if they guessed wrong three times, they would be turned into ornaments themselves.

Whenever one was turned into an ornament, the Nome King became more human in appearance. All of them were turned into ornaments except Dorothy, who was able to get the Scarecrow back and realized that people from Oz turned into green ornaments. Furious at this, the Nome King blamed Princess Mombi, who previously had Dorothy locked in her tower and was unable to prevent her escape, so he imprisoned her in a cage and then turned into a giant form and attempted to swallow the Gump, but only succeeded in eating the sofa part of him, as they were able to save his head.

He then tried to eat Jack, but as he was holding him above his mouth, Billina, who was inside Jack's head since their arrival on the mountain, laid an egg, which fell down the Nome King's throat. As eggs are poisonous to Nomes, this killed him, leaving only a pile of rocks and the Ruby Slippers. His mountain was destroyed afterwards.

In his most human appearances, the Nome King has a ruby ring on his finger and smokes a pipe. Along with some of his lines, this makes him similar to Dr. Worley (also portrayed by Nicol Williamson), whose final fate is mirrored with that of the Nome King.

The Nome King appears as a mighty brute of a king leading an army of the Nomes, he is one of the villains in The Witches of Oz (originally known as Dorothy and the Witches of Oz) and he was portrayed by Al Snow. He is among the villains that accompanies the Wicked Witch of the West in her attack on Earth. During the climax of the film, he fights the young man named Allen, who is the Tin Man and was defeated by him.

Tom and Jerry: Back to Oz

The Nome King later appears in the first Tom and Jerry sequel, Tom and Jerry Back to Oz, also playing as the main antagonist. He is very similar to the movie's character, Mr. Bibb, who are both played by Jason Alexander, who also voiced Abis Mal in the Aladdin franchise, Lil' Lightning in 101 Dalmatians: Patch’s London Adventure, Boris Badenov, and Hugo in The Hunchback of Notre Dame.

After Dorothy returned to Kansas, the Tin Man, Lion, and Scarecrow throw a celebration back in Oz until the flying monkeys attack, now under the rule of the Nome King. As the Nome King takes over, he imprisons Glinda inside a magical bubble and throws the Lion, Tin Man, and Scarecrow into the dungeon. With little magic left in her, Glinda uses it to free the three of them. The trio then escape through a tunnel built by the nomes that leads to Kansas.

There, they find Dorothy, Tom, and Jerry and tell them what happened. Everyone decides to go to the State fair where the wizard is in order to get back to Oz. Meanwhile, in the Emerald City, the Nome King's men return with Wicked Witch's relics. Droopy and Butch, who are part of his army, asks the Nome King why he wants the ruby slippers. The Nome King explained to them that his father gave away emeralds to build the city and rubies to make the ruby slippers, and then unveils his plan to use the ruby slippers to sink the city underground where the nomes' domains are.

As Dorothy and her friends make it back to Oz, they befriended a Jitterbug, a magical bug with the influence of making people dance. As they head over to Emerald City, the Nome King's army appear and separate them. While Dorothy and Scarecrow are captured by the nomes (they escaped from the nomes), Tin Man and Jerry were rescued by the Mouse Queen as Tom, Toto, and the Cowardly Lion came across the Hungry Tiger and her animal subjects. Only Dorothy and Scarecrow make it back to the Emerald City. As they return, however, the Nome King expected them as his army re-captures them. He then threatens to torture Scarecrow and Tuffy, the Munchkin mouse whom the Nome King captured early, to force Dorothy into giving him her slippers. As the Nome King tries the slippers, they turned into boots. He then began to click his heels together to make the entire city sink to an underground emerald mine. However, the Nome King kicks Tiffy out of the Emerald City and reunited with Jerry, Tin Man, and the Mouse Queen. Tin Man and Jerry notice the Emerald City sinking, so they rush over to Dorothy's side. There, underground, the Nome King plans to make everyone mine emeralds for him and to throw Dorothy into a nearby bottomless abyss, he calls "The Pit of Nome Return". Tin Man, Lion, Tom and Jerry appear beside Dorothy with the Mouse Queen, her mouse soldiers and the Hungry Tiger and her fellow animals. The Nome King, on the other hand, overpowers them as he incarcerates the Mouse Queen and their army in Emeralds and leaves Dorothy and gang hanging over the abyss. Luckily, as a final maneuver, Dorothy unleashes the Jitterbug upon the Nome King. The Jitterbug make him dance uncontrollably until he fell into the hole. Tom and Jerry try to save him, but manage to yank off the slippers (and one of his socks), causing him to fall to his demise.

The Nome King as seen in The Wonderful Wizard of Oz cartoon show. 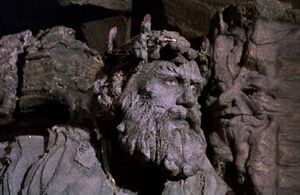 Nicol WIlliams as the Nome King in Return to Oz. 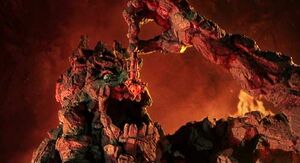 The Nome King in Tom and Jerry: Back to Oz. 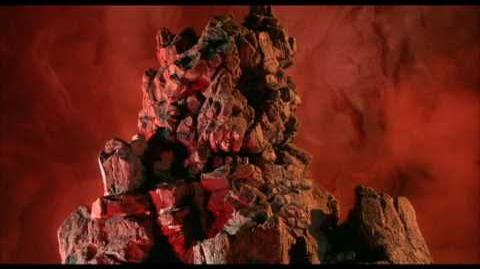