Possessing any vessel of his choice

Causing problems bad enough so Randy/The Ninja realized his mistake that led to his creation in the first place. (Succeed)

Ninja's Inner Self
NomiRandy was a creation of the NinjaNomicon, to teach Randy a lesson about becoming to dependent on its advice. Trapping him in the Nomicon and placing another Randy in his body. By giving him an example of what he would be like without any of its advice or good nature. Creating a much calmer, and laid back version of Randy. However he was also much more selfish and apathetic towards those who needed his help. He is the main antagonist of the episode "Shloomp! There It Is!".

Just like his original good counterpart, he was voiced by Ben Schwartz.

This version of Randy, managed to break Theresa Fowler's heart and make her cry, which allowing The Sorcerer (Randy Cunningham) to turn her into a monster. He then refused to go help her, or the people she was putting in danger, instead opting to go the arcade. Suspicious at his friends out of Character behavior, Howard stole the Nomicon, and accidentally broke in. There he managed to free Randy. Realizing what it meant, Randy escaped but was now in Howards body. Meeting up with his alternate self, the two ended up fighting over regaining Randy's body. However NomiRandy put on the Ninja's mask, gaining the powers he attacked Randy. Randy however managed to knock him off balance, and force him back into the book restoring both him and Howard to their proper bodies.

It is unknown what happened to NomiRandy afterwards, but it is likely NomiRandy is somewhere in the Nomicon or presumably destroyed.

Identical to Randy Cunningham, but wears his hood up.

He is similar to Randy in many ways, but there are a few important differences. He speaks with a Boston accent and he wears his hood all the time. He also lacks the morale and sense of duty that his counterpart possesses, which makes NomiRandy relatively edgy compared to his counterpart. He is also very calm in most circumstances, keeping his head when Bash yells at him and outsmarting him. Even a stanked Theresa Fowler rampaging in front of him isn't enough to faze him. He also shows that he is attracted to Heidi, flirting with her and not reciprocating Theresa's interest in him. 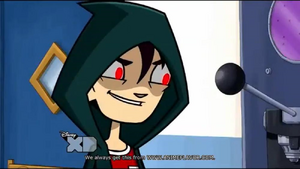 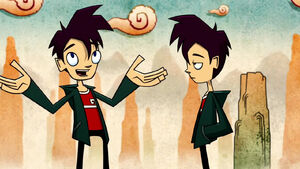 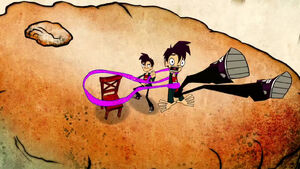 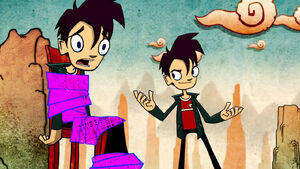 Randy tied to a chair by NomiRandy 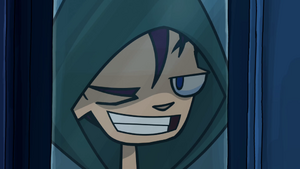 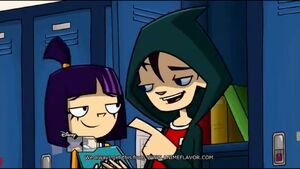 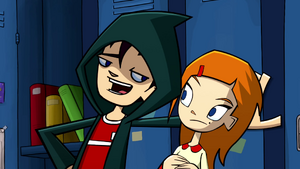 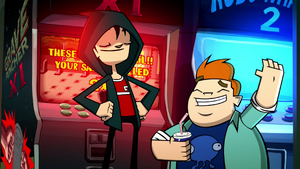 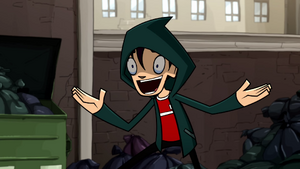