Killing people and posting the videos in internet.

Nomura Shuhei is the main villain of the 2014 Indonesian film Killers.

He was portrayed by Kazuki Kitamura.

A businessman whose secret life as sadistic serial killer who lured women to slept with him and killed them after bulged to death at his torture chamber by recording the videos of his killings and posted on the site. His videos were watching by journalist named Bayu who become ruthless vigilante after two of them who robbed and assaulted him. Noruma had tragic past when he had incestuous relationship with his sister and abused by their father before killed him and his sister died commit suicide along with his mother thus killed his father, after her death affected him to become killer who pick up or lured with innocent women and killed them.

Meanwhile a disgraced journalist named Bayu whose marriage is failing and tried bring corrupt official who killed two men for his defensible and Noruma was impressed by Bayu's actions when he posting the video and sent him on Noruma's site. meanwhile Noruma become obsessed with Hisae, a florist who lived with her younger brother and she had troubled life when she trying abandoned her brother to car accident but failed because he was only family member left.

Nouma begun feelings for her as he counted murdered girls and eat them. He also helping Bayu to kill his enemies include  Dharma's son. Noruma tried lured a prostitute named Midori while driving the car, Noruma fling with her as he planned to used her as next victim but he sees her by hallucinating Hisae which caused a minor accident left Midori nosebleed during cocaine addiction and called her pimp Ahmad who came for her only he humiliated Noruma by punching him which lose his teeth. Noruma went to forest when he met a father who murdered his family, Noruma ask the father why he killed and the man replied that pain off by killing before he commit suicide in front of Noruma. his friendship with Hisae become stronger as he begun fall in love with her. learning her situation include her brother was bullied by classmates at the school which Noruma gave him for a laser so he can enoucted his tormentors , , Noruma went to club where Mirodi and met Ahmad who give him for cocaine before Noruma takes his revenge on Ahmad by slashing on him by his siroccos and washed his face from blood.

Before He abducted Midori putting her in the trunk, only stopped by undercover cop who question him because there was murder in the club, Midori tried escaped before Noruma knock her for unconscious meanwhile feeling gulit for what he done Bayu returned to his family hopeful when Nrouma call him to show his potential victim Midori which is about to torture her on camera as Bayu looks on when Hisae calls at his house and confomrted him when her brother is going explained in the school during violence and Hisae heard Midori's cries for help, relazied he was psychopath she uses the taser on Nomura and rescued Midorii by assiated by Bayu's help only finds Noruma's sister whose corpse  was kept hidden in the room. and as they tired escaped ,Noruma killed them leaving Bayu guilt and return to his family where he reconciled with his wife Dina which Ely's joy.

Noruma buried house which things left behined include his sister as he went to Indonesia to met Bayu . Noruma went to Bayu's house when he cold blooded killed Bayu's wife Dina as his gift which anger Bayu not long , Dhamra's thugs kidnapped him and Noruma followed him by killing taxi driver. Noruma assassinated thugs and saved Elly's life from Dhamra at old building when a injured Bayu ask him why he killed Dina and Noruma replied that she is fighter , forced him to kill Dhamra otherwise he will kill Ely and a tearful Bayu killed Dhmara front of his dotting daughter. feeling digusted on his actions , Bayu fighting Noruma only shot on his face and later handcuffed him which both fall from the 5th floor of the construction building and which caused their deaths. When one boy recorded his dying moments , Noruma's last words - cut 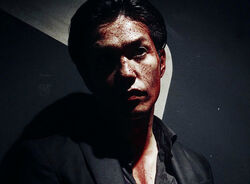 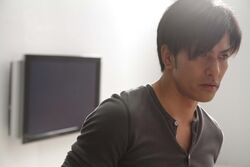 Add a photo to this gallery
Retrieved from "https://villains.fandom.com/wiki/Nomura_Shuhei?oldid=1783102"
Community content is available under CC-BY-SA unless otherwise noted.