Avenge Obake and Trina by making his own family by mind controlling Hyper-potamus, Crushroom and Hangry Panda.

Noodle Burger Boy is a major antagonist in Big Hero 6: The Series, serving as a supporting antagonist in Seasons 1 and 2 and the main antagonist of Season 3. He is the robotic mascot of the Noodle Burger restaurant chain, who is later reprogrammed by Obake to become one of his minions.

In "Killer App", Noodle Burger Boy is first seen handing out orders to customers while Hiro, Baymax, Fred and Wasabi are at the restaurant. He then serves Fred his predicted custom burger while Fred introduces him to Wasabi and Hiro. He scanned the latter two but was unable to predict their orders as they were new to his database, but claimed he couldn't wait to meet both while holding on to their customer profiles. Later that night, Obake breaks into Noodle Burger to both reprogram and abduct Noodle Burger Boy.

Fred, GoGo and Honey Lemon then go to Krei Tech, where Alistair Krei explains that his company constructed Noodle Burger Boy based on the schematics of an abandoned military robot project, and that he is thus totally indestructible. Meanwhile, Noodle Burger Boy searches for parts in the junkyard to upgrade himself, and comes across the bickering Hiro and Wasabi, who came to test their mech suit designed to collect space junk. After scanning the two, Noodle Burger Boy captures Baymax using a crane and takes control of the mech, chasing Hiro and Wasabi off.

Fred, GoGo and Honey Lemon face off with Noodle Burger Boy at the dump. However, he overcomes them rather easily with his prediction algorithm combined with the mech's abilities. Hiro and Wasabi soon arrive to help their friends, having switched their suits around to overcome Noodle Burger Boy's prediction algorithm. He is then forced to fight the heroes with brute force alone, although Hiro manages to slice through the mech's legs, allowing GoGo to capture Noodle Burger Boy with a net. This doesn't hold him for long, however, and he escapes in his go-kart before Baymax can warn the group of him doing so. Noodle Burger Boy returns to Obake's lair, saddened that he failed Obake's "order". Obake then asks if he acquired the data he asked for, and, learning that he did, he claims that he didn't fail. Obake plugs Noodle Burger Boy into his computer, extracting the scanned data he had taken of Big Hero 6, thus gaining knowledge of their secret identities.

Later, Noodle Burger Boy attacks Fred when he shows off his Kentucky Kaiju robot to his friends, and soon takes control of the robot and rampages throughout San Fransokyo. He plants a CPU chip inside the Kentucky Kaiju robot and soon leaves Big Hero 6 to deal with it as Hiro closes in on him. After defeating the robot using nothing but his intelligence, Hiro finds the CPU chip, deducing that Noodle Burger Boy couldn't have made it himself, and, recalling that Globby was only trying to get into his head, realizes that both villains are working for someone else. Noodle Burger Boy is then present as Obake explains that his true plan was to test Hiro's intelligence.

In "Steamer's Revenge", Noodle Burger Boy is seen spying on Big Hero 6 with Obake via a camera hidden in Fred's room. After the team watches the film reel Baron Von Steamer had sent to them to challenge Boss Awesome to a fight, he remarks to Obake that that "old-timey guy" is really going to interfere with his plan, but Obake is unconcerned, as Big Hero 6 lives for stopping villains. Later, Noodle Burger Boy pesters Obake with questions when he is converting water into D2O in order to use it as fuel, resulting in him being shut down by the latter.

In "Obake Yashiki", Noodle Burger Boy is sent to steal a shipment crate from Krei Industries, and is confronted by Big Hero 6. While he manages to overpower the other members, he is stopped by Hiro and Baymax, who prepare to defeat him and return the crate. However, Hiro ends up being distracted when he sees his deceased brother Tadashi standing nearby, allowing Noodle Burger Boy to escape. The next day, Big Hero 6 tracks Noodle Burger Bot down to an abandoned building, where he reveals to them that he had stolen a shipment of Krei's B.U.D.D.Y. Guards, which, using their flexible display technology, he makes take the appearance of several dumplings. He then stands on the side and watches as his new "minions" handle the heroes, and, once they are all restrained, he escapes with them.

Soon enough, he resurfaces with the drones at SFIT to steal it's new hyperconductive magnet. Although Big Hero 6 suits up to stop him, they are distracted by visions of their individual greatest fears (Fred's being arachnophobia, Honey Lemon's hippos, GoGo's leprechauns and Wasabi's heights), all while Hiro confronts "Tadashi" at Mr. Ohare's House of Scares, whom he realizes is merely an illusion projected through reality-augmenting lenses Obake had secretly placed on them while they were inside the House of Scares previously. Despite the other Big Hero 6 members realizing that their fears aren't real too, Noodle Burger Boy gets away with the magnet and delivers it to Obake's lair. Pleased, Obake tells his minion that the magnet "will do nicely" while making preparations for his final plan. 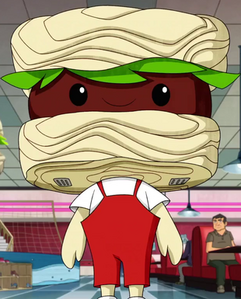 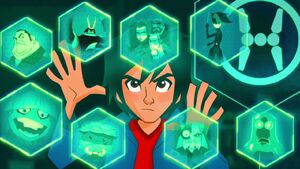 Noodle Burger Boy, as he appears in the intro. 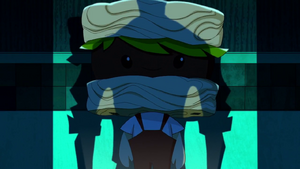 Noodle Burger Boy about to be kidnapped and reprogrammed by Obake. 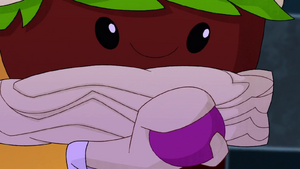 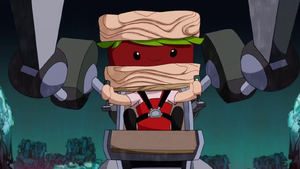 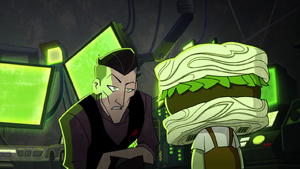