Having "fun" with the gang of ICarly.

To keep the gang of ICarly forever and to kill anyone who tries to save them. (formerly; failed).

Kill the ICarly gang/crew and anyone associated with them and to have new friends (failed).
Get revenge on the ICarly gang for getting her sent to prison (failed).
Find and Kill Carly, Sam, and Freddie (formerly; failed).
Kill Sam Puckett and Cat Valentine (failed).

Nora Dershlit is a major antagonist in the Nickelodeon sitcom iCarly. She is the main antagonist of the iCarly film iPsycho, its sequel iStill Psycho, and the Sam and Cat special episode "SuperPsycho". She was an obsessed iCarly fan and she had a crush on Freddie.

Over time she has evolved from a girl with a tragic background who just wanted friends, to a full blown mentally ill sociopath.

She was portrayed by Danielle Morrow.

She was lonely her entire life with her pet chicken. That was before the iCarly gang came in and made her house filled with several people. After the party, she locks up the iCarly gang so they could never leave and that she'll never be alone again. Then the iCarly gang send a special message to their friend Gibby saying to look at every fourth word, "Hi Gibby, have the greatest birthday. Go crazy, kiss your pretty girl, sorry we're still trapped at Webicon. Forgive us. Have fun. And please make sure you save some cake for us".

Gibby and his younger brother Guppy came in, with Gibby fighting Nora in mutual combat. Nora nearly defeats Gibby in battle, but Guppy manages to open the doors to the closet that the iCarly gang were trapped in, and Sam pinches Nora into unconsciousness. She was arrested by the police and was held in juvenile detention.

She returned in the sequel "iStill Psycho". Nora was released from prison after Carly convinced Sam and Freddie that she changed. However, it was a facade. This time, she and her parents Mr. and Mrs. Dershlit kidnapped the iCarly gang once again (including Spencer and Gibby). At the end of the episode Freddie's mom and T-Bo came bursting in with a motorcycle, rescued Carly and her friends (though Gibby was forgotten and still stuck to a chimney), and beat up Nora and her parents. The three got arrested and sent to prison.

She returns in the special Sam & Cat episode "Super Psycho", and serves as the main antagonist in that episode. Nora breaks out of jail by attacking a cop with a bucket on her head until she stopped moving (for a time) with the assistance of her chicken. In a movie theater, Gibby told her where Sam lived, which was Los Angeles. She kidnaps Dice and plans to shave his head in order to make a wig. Nora also had him trapped in her well and threw hoses at him. In order to find Nora, Sam Puckett and Cat Valentine had to ask Nevel Papperman, who was locked up due to having "Porcipine Pox". After they learned about her hideout, Cat got trapped in the well with Dice. As Nora was about to fight Sam, Sam easily threw her into the well (and landed on Dice). She was taken back to prison by police officers while vowing that she will return yet again for her revenge. It was seen that Nevel escaped from the asylum. 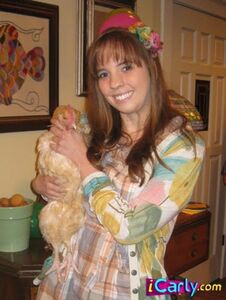 Nora Dershlit and Maurice
Add a photo to this gallery

Retrieved from "https://villains.fandom.com/wiki/Nora_Dershlit?oldid=3306357"
Community content is available under CC-BY-SA unless otherwise noted.