Villains Wiki
Register
Don't have an account?
Sign In
Advertisement
in: Artificial Intelligence, Humanoid, Phineas and Ferb Villains,
and 48 more

Attending to the Doofenshmirtz family's needs.

The Norm Bots are supporting antagonists in the 2011 TV film Phineas and Ferb The Movie: Across the 2nd Dimension. They are the alternate reality versions of Norm, but are more menacing and successful as they were designed by 2nd Dimension Heinz Doofenshmirtz to enforce his family's dictatorial rule in their Tri-State Area.

They were all voiced by John Viener and Kevin Michael Richardson.

The Norm Bots were created by 2nd Doof of the 2nd Doofenshmirtz Evil Inc. in his family's plot to take over the 2nd Dimension Tri-State Area. After defeating his nemesis 2nd Perry the Platypus, he turns the latter into Platyborg to serve as his second-in-command and Norm Bot general. 2nd Doof then proceeded with his plan by sending out Platyborg and the Norm Bots to take over the Tri-State Area with ease.

With the Tri-State Area under the Doofenshmirtz family's control, the Norm Bots were assigned to to enforce the family's reigns by patrolling all streets, which they have done for five years; even when 2nd Dimension Candace Flynn formed a resistance to fight back, the Norm Bots maintained the Doof's family rule, leaving the Resistance with little to no success. It also allowed 2nd Doof's wife 2nd Charlene to capture 25 more of O.W.C.A.'s agents and turn them into Animal-Borgs to secretly enforce the Doofenshmirtz's family's reign.

The Norm Bots first appeared when 2nd Doof summons them to capture the original Perry and the boys after having Platyborg to expose Perry's identity. Despite the Norm Bots' attempts, the three escape, though Phineas and Ferb are mad at Perry for not telling them about his occupation. Upon learning that his original counterpart created an -inator that helps travel to other dimensions, 2nd Doof decides to utilize this in his next plot to unleash a massive army of Norm Bots to take over the original Tri-State Area.

To start off, 2nd Doof forced Perry to surrender himself in exchange for the boys' safety, and he would later lure the boys into a trap by using Perry as bait since he needs them to fix the -inator. To that end, several Norm Bots manages to help surround the boys (along with their sister Candace) and capture them. After the -inator is fixed, 2nd Doof tries to send the original Doof, Perry and the kids to be fed to the Goozim, but this was foiled by the efforts of an arriving 2nd Candace, allowing Doofenshmirtz, Perry, and the kids to escape back to their original dimension.

Despite the five returning back to the 1st Dimension, several Norm Bots have already captured 2nd Candace and have her locked up in a cell, though she would be later freed by 2nd Phineas, 2nd Ferb, and 2nd Jeremy Johnson. 2nd Doofenshmirtz then enters into the original dimension, where he creates a satellite to control the Norm Bots and activates Doofenshmirtz's original -inator to ensure that the portal is stable for the Norm Bots to get through from the other side. He then unleashes the Norm-Bots onto the original Tri-State Area as they attempt to force the citizens to obey and accept 2nd Doof as their new leader. Though Phineas and Ferb manage to get their friends to fight against the robots, 2nd Doofenshmirtz sends in more Norm-Bots before personally engaging in a fight against Phineas while Perry fights against Platyborg. After Perry manages to defeat Platyborg by sending him to fry on an electrical socket, he and Phineas manage to destroy the satellite with a baseball launcher, causing all the Norm Bots to deactivate.

Eventually, 2nd Doof was convinced out of his plot by an arriving Doof, who lends over his toy train to change his mind. With that in mind, 2nd Doof reveals that he has implanted a self-destruct mechanism on all the deactivated Norm Bots and activates it, destroying the Norm Bots and cleaning up the mess. However, 2nd Doof ends up being arrested for his crimes against humanity following his return to the 2nd Dimension while Platyborg is relieved of his evil programming and reunited with his family.

The Norm Bots only made a cameo appearance during the episode's intro as 2nd Charlene's narrates the film's events before enacting her plan to free 2nd Doof from prison (with the help from 2nd Vanessa, the Animal-Borgs, Giant Mechanical Ants and Tony Marzulo), which was a complete success. 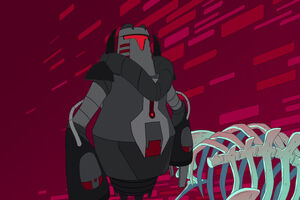 A Norm Bot after knocking off the head of a statue by accident. 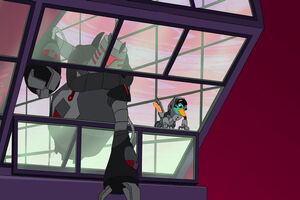 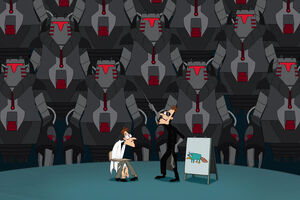 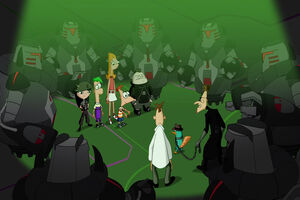 The Norm Bots helping 2nd Doof trap the kids by using a captive Perry as bait. 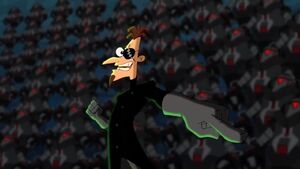 2nd Doofenshmirtz ordering the Norm Bots to send his original counterpart, Perry, and the Flynn-Fletcher kids to their doom. 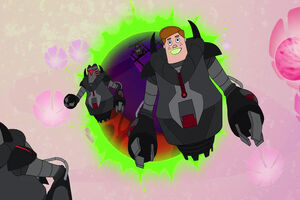 One of the Norm Bots showing his original face while chasing the heroes. 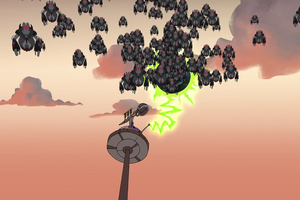 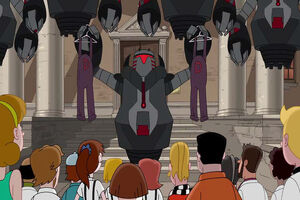 A Norm Bot ordering several citizens to put on Dooferalls. 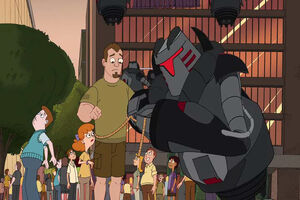 A Norm Bot checking a man's waist size for the perfect size of Dooferalls. 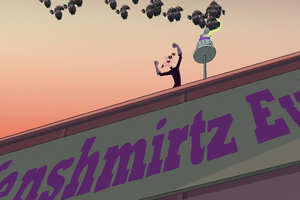 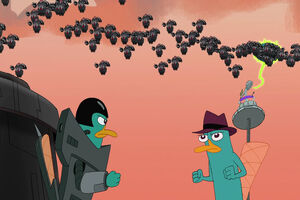 More Norm Bots entering as Perry and Platyborg engage into a fight. 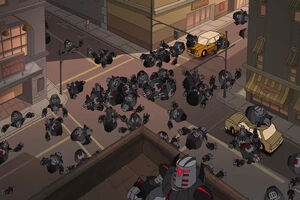 The Norm Bots being deactivated before their self-destruction. 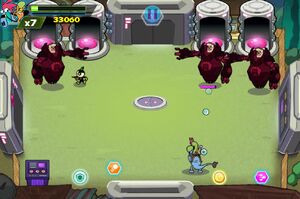 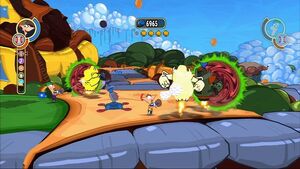 Green Norm Bots in the Phineas and Ferb: Across the 2nd Dimension videogame.