Get Monroe's supplies back.

Norma is a character and the main antagonist in Telltale Games' The Walking Dead: Michonne. She is the leader of the community called "Monroe".

She is voiced by Cissy Jones, who also voiced Jolene and Linda in the game.

At some point of her life, Norma was part of a union, and developed a feared reputation among her comrades, namely due to her handling of an hostile colleague, earning her nickname "Stormin' Norma", and opened a boat shop with her nickname.

Norma is first seen talking to Randall about the interrogation. She is later heard on the radio ordering Michonne to spare Randall.

Norma brings Michonne's crew as ransom for her brother, depending on how the player chose to deal with Randall, she can react differently, however no matter what Randall still ends up getting killed after he attacked Michonne when he was set free, so she still becomes enraged at Michonne. Her fate is extremely gruesome but the player can choose to end her suffering before it get's really bad. 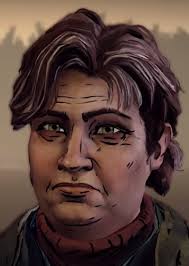