Owner of the Bates Motel

Norma Bates is the overarching antagonist in the Psycho novel and film series. She is the abusive mother of Norman Bates, and would influence her son's development into a serial killer.

Virginia Gregg, Paul Jasmin, and Jeanette Nolan were the uncredited voices of "Mother" inside Norman's head in Psycho, used interchangeably except for the last speech, which was performed by Gregg. Olivia Hussey plays the character in flashback segments in Psycho IV: The Beginning.

In Bloch's novel, Norma is depicted as a religious fanatic who raises Norman with cruelty, refusing to let him have a life outside of her, and preaching to him that sex is sinful and that all women (except herself) are whores. It is also implied that their relationship may be incestuous.

When she takes a lover, Norman becomes insanely jealous and kills her and her boyfriend with strychnine; he then preserves her corpse and assumes her personality to pretend she is still alive, and avoid the guilt of killing her. As "Mother", he dresses in her clothes and talks to himself in her voice. "Mother" is as jealous and possessive as Norma had been in life, and kills any woman whom Norman has feelings for.

Norma Bates (nee Spool) married John Bates in the 1940s, and lived with him in Fairvale, California. They had one child together, whom they named Norman. When Norman was five years old, John was stung to death by a swarm of bees. In Psycho II and III, Norma's sister Emma Spool killed him, while in the original novel, John simply left the family.

Norman recalled in his conversation with talk show host Fran Ambrose that whilst they attended John's wake, she tickled him as they sat in the church, causing him to laugh. She immediately chastised him for his laughter, despite being the direct cause of it.

This behavior would continue as Norman grew into a young man, with the relationship becoming sexualized to the point where simple mother-son play would result in her sexually stimulating him, then punishing him for developing an erection. As Norman started to become interested in girls, she imposed a strict belief system on him which had him believe that all women, apart from her, were whores and should be punished for being promiscuous.

She would become very jealous if Norman interacted with girls, even blowing up into a rage when she found a pornographic magazine in his bedroom. When Norman was in his teens, Norma became romantically involved with Chet Rudolph (Joe Considen in the original novel), and was not shy about her sexual activity with him around the house.

Chet himself repeatedly discussed his sex life with Norma in front of Norman, and was egotistical, chauvinistic and pig-headed. Norman quickly grew to dislike Chet and became extremely jealous of his relationship with Norma. After Norma married Chet, they built and invested in a motel which they built close to the house.

During a conversation with Norman whilst out in the yard hanging some laundry, Norma expressed her hatred for Norman and told him that he was a mistake and should never have been born. This was the end for Norman, who decided he could no longer tolerate her abuse.

After a night of having sex with Chet, Norma was surprised to find Norman had made them both two iced teas. After consuming the drinks, Chet began to convulse, shortly followed by Norma. Chet instantly surmised that Norman had poisoned them, and he was correct, as the drinks were laced with arsenic. Despite suffering the agony of arsenic poisoning, Chet found the strength to attack Norman, and after a short struggle and scuffle, fell down the stairs to his supposed death. Norma would cheer Chet on as the poison took effect on her and confronted her son on the stairs though she fell down.

Norman would soon drag the two bodies to the basement, there he'd put Norma in her rocking chair where she weakly regained consciousness and glared at her son before she finally died. Chet would then attack Norman but he succumbed to the effects of the poison and died on the basement floor. Norman would then cover their deaths with a fake suicide note that made it look Norma killed both herself and her lover.

We are led to believe that Norma is the killer until the film's climax, when Marion's sister Lila finds her desiccated corpse in Norman's fruit cellar. Norman then charges in dressed as Norma, brandishing a knife, but Marion's boyfriend Sam Loomis tackles and subdues him. After Norman is institutionalized, "Mother" takes complete control of Norman's mind, resolving to make her jailers believe that she "wouldn't even harm a fly".

Norman is released from the institution twenty-three years later, seemingly cured; he soon begins to receive strange, unexplained notes from "Mother", which causes him to lose his grip on sanity. Norman's psychiatrist Dr. Raymond tries to prove to him Norma is truly dead by unearthing her corpse. During a psychotic episode, Norman hears her voice over the telephone and becomes convinced that she has come back to haunt him. Meanwhile, several people, including Dr. Raymond and Marion's sister Lila, are found murdered, casting suspicion on Norman.

In the end, however, it is revealed that the communications from "Mother" are part of a ruse by Lila Crane and her daughter Mary to drive Norman insane again, and the murders were committed by Emma Spool, who tells Norman she is his real mother. He kills her and assumes the "Mother" personality once again, which leads to the revelations of Psycho III about Norman's true parentage. 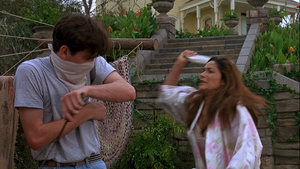 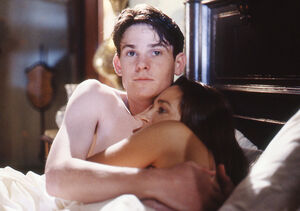 Norma in bed with Norman. 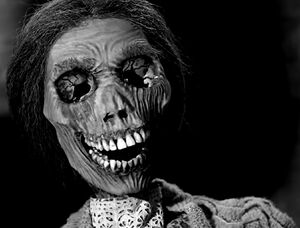