Villains Wiki
Register
Don't have an account?
Sign In
Advertisement
in: Mature, Spoilers, Articles under construction,
and 41 more

Killing criminals who attempt to enter his house.

Kill the intruders in his house (mostly succeeded, except Rocky).
Replace his late daughter with Cindy, and later Rocky (failed).
Protect his adopted daughter, Phoenix from her murderous parents (succeeded).

The "Blind Man" (real name: Norman Nordstrom) is the main antagonist of the 2016 horror film Don't Breathe and the titular anti-heroic main protagonist in its sequel, Don't Breathe 2. A blind man who seemed to be an easy target at first, he is revealed to be far deadlier than initially thought.

He was portrayed by Stephen Lang, who also played Miles Quaritch in Avatar, Khalar Zym in the 2011 remake of Conan the Barbarian, Increase Mather in Salem, Percy "King" Dimplewade in The Nut Job, The Party Crasher in The Hard Way, and Shrike in Mortal Engines.

Norman Nordstrom is a blind Army veteran who received $300,000 as compensation after his daughter Emma Nordstrom was killed in a car accident by a wealthy young woman named Cindy Roberts. Grief stricken by her death, Norman kidnapped Cindy and impregnated her by injecting his own semen into her through a turkey baster-given she was the one who killed his daughter, he thought it fair that she give him one back.

After failing to save up enough money to escape to California with her younger sister Diddy, the film's protagonist, Rocky, is informed of Norman's situation and how much money he has by her cohorts, Alex and Money (her boyfriend). The three delinquents drug the elderly man's dog and they search around the house for an entrance; upon seeing that all of the entrances were locked, Rocky manages to slide through a small window. They quietly browse the house for the money, to no avail. Believing that the money had to be behind a locked door, Money shoots the lock, waking the Nordstrom as a result. Despite being blind, he effortlessly subdues Money. Money lies and says he's the only intruder, after which Nordstrom murders him with his own gun. Hiding in a closet, Rocky observes Nordstrom opening a safe to check on his money. Once he left, Alex and Rocky use the opportunity to collect the money. Unfortunately for them, Nordstrom discovers their shoes, realizing that there was more than one intruder in his house. He sealed the exits to make sure they did not escape and began a search throughout the house.

While escaping from the murderous Nordstrom the remaining delinquents head towards the basement. In his basement, they discover Cindy in a homemade padded cell, bounded and gagged. Reading that she was found not guilty for accidentally killing the Blind Man's daughter in a newspaper, they found out Nordstrom kidnapped her out of anger. They free the woman from her restraints and they attempt to escape the house through his cellar door, only to find the killer waiting on the other side. He attempts to shoot Rocky or Alex with Money's gun; however, in a mistake, he murders Cindy instead. Enraged at her death he shuts off the lights to make them unable to see. He shoots at the two burglars, but after a struggle, Alex was able to knock him out. Rocky attempts to escape through the ventilation system, while Alex is dragged into the utility room by Nordstrom after he recovers. He then stabs him with a pair of garden shears, seemingly killing him but completely misses when he actually stabbed at money's corpse.

Rocky discovers that the dog is awake and hostile, which pursues her in the air vent. She is eventually captured by Nordstrom. Waking up restrained in the basement, Nordstrom reveals he is a grief-stricken rapist (although he does not view his actions as actual rape). He explains that he impregnated Cindy in order to replace the daughter that he had lost to her. Because of her death, the Blind Man now plans to use Rocky as a replacement. After stating that he is not a rapist, he was about to artificially inseminate her with a turkey baster filled with his semen. When Alex knocks him out and handcuffs him, he is stopped.

Nordstrom manages to break himself out and finds the two cohorts as they are about leave, managing to shoot Alex in the shoulder and Alex falls unconscious, much to Rocky's horror. Rocky flees, but Nordstrom sends the dog after her. Rocky eventually managed to trap the dog in her car trunk, but before she could leave, Nordstrom catches up, knocks her out and drags her back to the house, intent on finishing the job. Before he could, however, Rocky was able to disorient Nordstrom by turning on his house's loud alarm system. She then hits him repeatedly with a crowbar and pushes him into the basement. The gun fires into his side as he falls. She then escapes before the police arrive to investigate.

Instead of dying from his injuries, Nordstrom is reported to have been admitted to a hospital and is under stable condition. However, it is shown that (for some reason) he did not report Rocky or the stolen money, implying that he indeed intends to buy her silence. This allows Rocky to succeed at acquiring the money, and she leaves to Los Angeles with Diddy.

Nordstorm had survived and had been protecting a girl he saved from her murderous father after a fire accident.

Considering how Nordstrom is completely sightless, he hardly speaks in the film. Rather, he has to rely on his other senses to get a visual idea of his surroundings. As such, he is surprisingly agile and stout. Additionally, he can take a beating pretty well, even when he suffers several blows to the back of the head by a crowbar, he only sustains a few minor injuries. This is noted that his only weakness is loud sounds.

When Nordstrom does speak, he has a notably gravelly voice. He reveals himself to be a nihilistic individual who was still greatly suffering from the loss of his daughter, scoffing at the idea of a loving God who would allow a rich woman to escape the legal repercussions for accidental manslaughter. Despite him artificially inseminating women with his semen, Nordstrom strangely does not consider himself a rapist; in his mind, he cannot possibly be one since he does not force himself on the women involved. 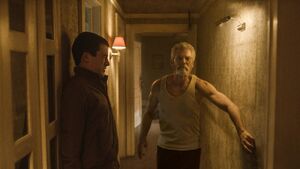 The Blind Man looking for the intruders by touching the walls. 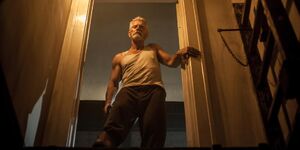 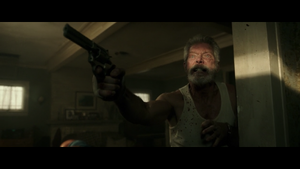 The Blind Man after shooting Alex. 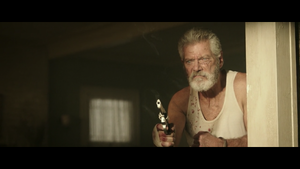 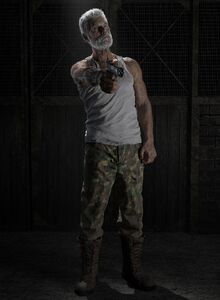 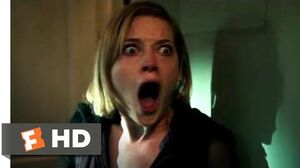 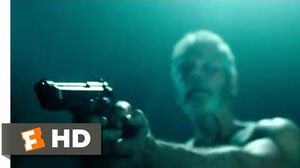 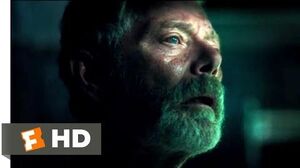 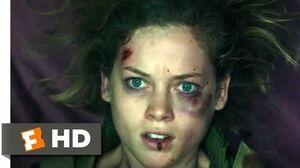 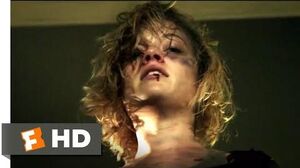