Talking down on others.

Force Otto Octavius and Peter Parker to work at Oscorp.

Get re-elected as mayor of New York (both abandoned).
Cure his son Harry of his terminal illness (ongoing).

Norman Osborn is the overarching antagonist of the 2018 video game Marvel's Spider-Man, as well as a minor character in its 2020 spin-off Marvel's Spider-Man: Miles Morales. He is the CEO of Oscorp, the former childhood friend of Dr. Otto Octavius, the father of Harry Osborn, and the former mayor of New York City.

He was voiced by Mark Rolston, who also played Bogs Diamond in The Shawshank Redemption, J. Scar in Eraser, Lex Luthor in Young Justice and Deathstroke in the Batman: Arkham series.

In his youth, Norman Osborn befriended Otto Octavius during his years in grad school. Together, the two eventually started a business company known as "Oscorp". However, as Norman became more and more obsessed with genetics, particularly a substance called Devil's Breath, the two had a falling out and Otto left Oscorp.

At some unknown point in time, Norman Osborn was elected mayor of New York. Despite this, Osborn was also known for his generally dishonest and condescending nature, as Peter Parker notes of him in his character bio.

Norman appeared in-person when he has his team shut down Otto Octavius' and Peter Parker's lab and cut his funding, due to the site being declared a safety hazard due to a recent accident. Otto insists his previous safety violations were excused, by Norman reminds him that he was the one who excused it and that Otto's equipment should have been confiscated long ago. Norman insists both Otto and Peter work at Oscorp from then on, but Otto rejects his offer.

Later, Norman is seen awarding Officer Jefferson Davis for his bravery and years on the police force until he receives a call from Mister Negative, warning Norman of an incoming attack. Norman escapes immediately before the Inner Demons attack the ceremony, killing many civilians, including Jefferson Davis.

In the aftermath of the attack, Miles Morales, the son of Jefferson Davis, joins F.E.A.S.T. as a volunteer, meets Peter, and quickly befriends him. At the same time, Osborn hires mercenary Silver Sable and her team from Symkaria to take down the Inner Demons. Sable does not trust Peter and constantly makes things difficult for him. Peter continues to pursue Mister Negative and the Inner Demons, discovering that Li has a grudge against Osborn and seeks to steal the Devil's Breath, a bioweapon Osborn inadvertently created while searching for a universal cure for disease. Li manages to steal the Devil's Breath and attempts to deploy it in Grand Central Station, but is foiled by the efforts of both Peter and Mary Jane. Li is subsequently arrested and sent to the Raft, a high-security prison.

Norman denies all wrongdoing and goes as far as to hire Silver Sable and her mercenaries for protection. After Martin Li is apprehended by Spider-Man, he claims credit and encourages the citizens of New York to vote for him in the incoming relection, and this enrages a now unhinged Otto Octavius, who blames him for his financial burdens and stealing his research.

He dons the mantle of Doctor Octopus and frees the convicts from prison, forming the Sinister Six and enlisting their help in dismantling Norman and his empire. Octopus eventually captures Norman himself, intent on forcing him to confess to his crimes. When he refuses, he is thrown from the top of Oscorp Tower, but is rescued by Spider-Man.

Sometime later, Norman resigns from office and is seen in his secret lab, looking at his son Harry. Rather than being in Europe as everyone believes, Harry has been put into a coma in a tank until his father can find a "cure" for his illness. It's shown that Harry is being kept in stasis with a black web-like substance, implied to be a Symbiote, which reacts and copies Norman when he places a hand on the tank.

More than a year after the defeat of Doctor Octopus and the Sinister Six, Norman is nowhere to be seen or heard from during Tinkerer's campaign against Simon Krieger. In this time, Miles Morales, Peter Parker's superhero apprentice has taken over his role as the sole Spider-Man in New York City while Peter goes to Symkaria with Mary Jane.

During her campaign, Tinkerer began to use the now-abandoned Oscorp Science Center as a hideout, given that the building has been closed down, most likely due to Oscorp's stocks having tanked as a result of Norman being indirectly responsible for the events that transpired in the previous year. Ever since the whole Devil's Breath crisis, Norman has retreated into obscurity along with his company for the current time.

In the mid-credits scene, Norman is revealed to have still kept Harry in stasis in a green liquid container with the unidentified black web-like substance. Feeling that Harry can be released from his stasis now after seeing him awake, Norman demands Dr. Curt Connors, Harry's medical caretaker, to release him, despite Connors' reluctance given that Harry's condition is still unstable, though Norman angrily ordered him to do it. 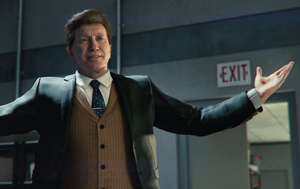 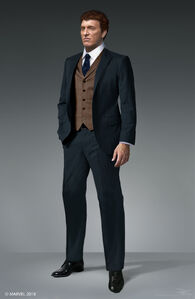 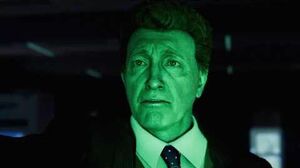