Get Buddy back (partially succeeded, yet failed).

Norman F. "Norm" Snively is the main antagonist of the 1997 film Air Bud. He is an alcoholic clown known by his nickname "Happy Slappy" who is abusive to Buddy.

He was portrayed by the late Michael Jeter.

Snively can be best described as an irresponsible wastrel. This can be best shown in the scenes with his truck as it is very messy inside as he doesn't bother to clean it and he also doesn't bother to have it fixed when it falls apart. This is most likely because he is an alcoholic as he has countless beer cans in his kitchen window. He is also very irritable as a result of his alcoholism, and very frequently takes it out on Buddy, whom he blames for his own mishaps due to his ineptitude as a party clown.

Twelve-year-old Josh Framm meets Buddy, who had escaped from Norman Snively. Snively had locked Buddy in a kennel after causing trouble at a birthday party (though it was Snively's own fault for using a ball that was too big for Buddy's mouth) and was taking him to the dog pound when the kennel fell off the truck.

Later on, Snively (after seeing Buddy on TV), tricks Josh's mom and steals Buddy from Josh. Josh then infiltrates Snively's backyard, where Buddy is chained up.

Snively initially cannot see Josh due to a stack of beer cans on his windowsill until it falls and Josh is caught infiltrating his backyard. Josh gets the chains off Buddy and both escape, causing Snively to chase Josh and Buddy in his dilapidated clown truck. Due to the poor state of the vehicle it falls apart with the door & front bumper falling off. The chase rages on to a play ground where the Utex bonnet blocking the windscreen, Snively accidentally destroys a swing set & almost runs over a man and a woman having a picnic, he then smashes though a sign into a parking lot near a lake, during which the clown trucks breaks fail, causing Snively to hit a car & lose the steering wheel and his truck to splash into the water destroying it completely.

Later on, despite losing the paperwork to Buddy from the car wreck, Snively sues the Framm family for custody of Buddy. Fortunately, at the suggestion of coach Chaney, who the judge was a fan of, it is decided that the dog will choose who will be his rightful owner. During the calling, Snively takes out his roll of newspaper, which he often used to hit Buddy, and snaps at him, causing Buddy to attack Snively, tearing up the weapon of abuse and run towards Josh. The judge grants custody of Buddy to Josh while an angry Snively, who runs at Buddy and Josh in a last-ditched effort to get the dog back, is dragged away by the police after the judge demands that Snively be arrested for animal cruelty, while Josh and the rest of the citizens rejoice for the new home of Buddy. He doesn't appear in any sequels, as he may still be in prison or simply moved to another city (it is also possible that he may have gotten fired as a clown due to his animal abuse and alcoholism). 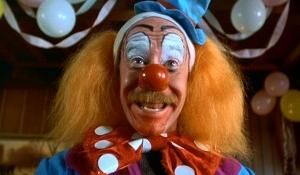