Kill Mathilda's father and retrieve the drugs he stole from him (succeeded).

Kill Mathilda as a witness and put an end to her vendetta (failed).
Kill Léon (succeeded, at the cost of his own life).

Norman Stansfield is the main antagonist of the 1994 action crime-drama thriller film Léon: The Professional.

He is a corrupt DEA agent and an obsessively psychotic drug lord who becomes the subject of the film's young co-protagonist, Mathilda Lando, seeking revenge on him; Stansfield had forced Mathilda's abusive father to plunder drugs from him, before later murdering him and his family excluding Matilda, thus leaving her as an orphan and becoming the protégée of the film's titular protagonist, an Italian hitman named Léon Montana.

He was portrayed by Gary Oldman, who also portrayed Count Dracula in Bram Stoker's Dracula, Drexl Spivey in True Romance, Jean-Baptiste Emanuel Zorg in The Fifth Element, Egor Korshunov in Air Force One, Spider Smith/Dr. Zachary Smith in Lost in Space, Ruber in Quest For Camelot, Mason Verger in Hannibal, Rocky in True Crime: Streets of L.A., General Grawl in Planet 51, Carnegie in The Book of Eli, Daniel Clarke in Call of Duty: Black Ops, Father Solomon in Red Riding Hood, Lord Shen in Kung Fu Panda 2, Nicholas Wyatt in Paranoia, Dreyfus in Dawn of the Planet of the Apes, Lord Vortech in Lego Dimensions, and Vladislav Dukhovich in The Hitman's Bodyguard.

Norman Stansfield is first seen interrogating the father of Mathilda Lando over a stash of cocaine he agreed to hold for them: the supply was pure when it was left with the holder, but now a quantity of it has apparently been replaced with a cutting agent. Though he appears to accept the holder's protestations of innocence, Stansfield later returns with a full gang, knocking down the door and killing most of Mathilda's family in the ensuing raid - Mathilda herself only managing to escape the massacre thanks to a well-timed shopping trip, though the gang is already on the lookout for her by the time she arrives back at the apartment. Fortunately, she is able to find shelter with the hitman Léon; over the course of the film, she attempts to learn Léon's skills in an attempt to take revenge on Stansfield and avenge the death of her little brother.

After several weeks of study, Mathilda fills a shopping bag with guns from Léon's collection and sets out to kill Stansfield, having finally tracked him down. She bluffs her way into the DEA office by posing as a delivery person, only to be ambushed by Stansfield in a bathroom and forced to admit her true identity under Stansfield's uniquely disturbing brand of interrogation. Fortunately, before he can kill her, news arrives that Léon has taken his own revenge for the death of Mathilda's family by eliminating Malky, Stansfield's lieutenant; shaken, he leaves her to his men for a more in-depth interrogation. At this point Léon, having discovered her intentions in a note left for him, arrives at the building and rescues Mathilda, gunning down two of Stansfield's men in the process. However, Stansfield himself is able to escape once again, and is now enraged at the interference in his business, and resolves to put an end to it by any means available to him

Tracking down Léon's employer, Tony, he coerces him into surrendering Léon's whereabouts, ensuring Tony's cooperation by threatening the lives of his family. Later, as Mathilda returns home from grocery shopping, an NYPD ESU team sent by Stansfield takes her hostage and attempts to infiltrate Léon's apartment. Léon ambushes the ESU team and barters one agent for Mathilda's freedom. In between shootouts, Léon creates a quick escape for Matilda by chopping a hole in an air shaft, and hurries her away as quickly as he can - remaining behind to cover her escape.

In the chaos that follows, Léon sneaks out of the apartment building disguised as a wounded ESU officer; unfortunately, though he comes close to escaping, he is recognized and followed by Stansfield, who ends up shooting the hitman in the back. As Stansfield jeers down at him, Léon places an object in the DEA agent's hands, which he explains is "from Mathilda", before dying. Opening his hands, Stansfield recognizes the object as the pin from a grenade. He then rips open Léon's vest to discover several live grenades strapped to his chest, leading him to say "Shit" upon realizing his fate, seconds before a massive explosion kills him, avenging Mathilda's family and all those he killed throughout his career.

A corrupt DEA agent, Stansfield manages a drug-dealing operation on the streets of New York, maintaining profitable connections with many of the city's crime syndicates in the process. Aggressive and deranged from habitual drug use, Stansfield will do anything to ensure his operation runs smoothly - including the murder of entire families.

Corrupt, impatient, foul-tempered, peculiar and extremely violent, Stansfield has not only managed to mastermind a major criminal operation despite being a DEA agent subject to the oversight of his superiors, but is also a habitual drug user and addict - often seen downing pills before committing murders, suffering violent spasms as a result. Rumpled, unshaven and sweaty, his addiction clearly shows in his appearance long before it shows in his unusual behavior.

Initially, Stansfield merely seems quirky rather than actively dangerous: totally disconnected from Malky's dispute with Mathilda's father, he seems content to listen to classical music while he leaves his gang to handle the negotiations. When Mathilda's father finally draws his attention, Stansfield "detects" his dishonesty by sniffing him, deliberately unnerving the man by invading his personal space. However, as he soon demonstrates, his comical tics are often accompanied by violence: later, after downing a pill and expounding at length on the emotions such "quiet little moments" instill in him, he bursts into Mathilda's apartment and proceeds to shoot her mother and sister in quick succession, miming like a conductor as he strides through the corridors. Then, having cornered Mathilda's father, he puts down his gun and starts lecturing the man on the proper use of Beethoven and Mozart in "this kind of work." Interestingly enough, he notes that as much as he enjoys Beethoven's overtures, "he does tend to get a little fucking boring" afterward - and indicates that this is the only reason why he stopped rampaging in the first place.

In times of stress, Stansfield's behavior grows increasingly deranged: when Mathilda's father manages to shoot him in the shoulder - doing more damage to his suit than the man himself - Stansfield not only guns him down, but upon seeing the bullet hole in his jacket, proceeds to follow the mortally-wounded drug holder through the apartment, shooting him in the back until he runs out of bullets. When Malky finally catches up with him, Stansfield is in the middle of reloading with the intention of shooting the holder's corpse again, and when the two go outside for a smoke, he goes so far as to take a potshot at an elderly resident complaining about the noise. This explosive reaction to stress only grows more pronounced as the film continues: appearing unusually calm and subdued upon discovering Mathilda's assassination attempt, his mood worsens until he resorts to screaming for his henchmen to bring him "EVERYONE" in a psychotic attempt to bring down Léon once and for all.

In the end, Stansfield is a nihilistic villain, showing little self-respect or concern for his own safety - casually wandering into his gang's field of fire at one point - and even less for the lives of others, casually firing loaded weapons at passers-by and wiping out entire families without any kind of emotional response (though he is still affected when learning the death of Malky); as he later confesses to Mathilda, he actively enjoys killing, though only if his victim fears for their life and honestly doesn't want to die. He doesn't even respect his colleagues, casually leaving Willie Blood on the scene of the apartment massacre to face police interrogation. Even when he realizes that he's going to die, he can only respond with a bemused mumble of "shit", seemingly unable to respond with anger or fear in his final moments.

Stansfield trying to figure out who has been conning him out of his drugs. 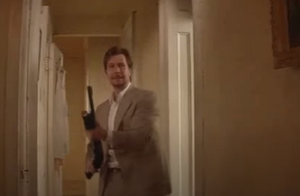 Stansfield breaking into Mathilda's home and killing her entire family.

Norman snapping at the officers.

Stansfield searching the house of Mathilda's family for the missing drugs. 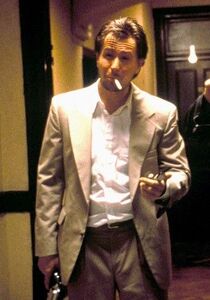 Stansfield about to light up a cigarette after shooting out a window in a fit of rage.

Stansfield confronting Mathilda in a bathroom after discovering her plans to kill him. 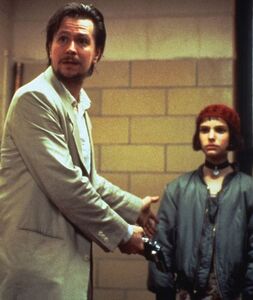 Stansfield attempts to kill Mathilda when his unit informs him about Léon's presence in the DEA building.

Stansfield spying on Léon after attacking his apartment.

Stansfield discovering a cluster of live grenades strapped to the dying Léon's chest.

Stansfield after shooting Léon in their climatic confrontation.

Stansfield apathetically realising he is moments away from his demise. ("Shit...")