Servant to the Sahalin family

Keeping an eye on the well-being of the Sahalin siblings.

Enforcer
Norris Packard is an officer in the Zeon military charged with protecting the Apsalus Project and a supporting antagonist in the 12 episode Mobile Suit Gundam: The 08th MS Team OVA.

Packard piloted a Zaku to fight against Shiro Gundam, but after his Zaku was heavily damaged Packard was forced to flee. Packard later piloted a fighter jet to serve as support to Aina when she was testing the Apsalus. After his fighter was damaged, Packard reluctantly retreated, leaving Aina behind. He is seen later as his troops protect her down craft in a village as they repair it pulling out before the main battle begins.

Packard later goes out alone to secure a safe route for the Kergeren. He finds the 08th MS Team protecting three Guntanks that they intend to use against it. He engages them with his Gouf Custom and defeats two of their Gundams, as well as destroying two of the tanks. Shiro Amada then arrives and engages Packard, killing him, but not before he destroys the last Guntank. 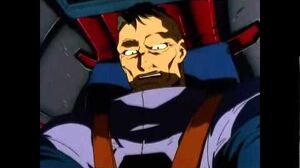 Retrieved from "https://villains.fandom.com/wiki/Norris_Packard?oldid=3611437"
Community content is available under CC-BY-SA unless otherwise noted.