The North Wind Miser, mostly referred to as simply North Wind, is the main antagonist of the 2008 animated television special produced by Warner Bros., A Miser Brothers' Christmas. He is the evil, arrogant, and narcissistic elder brother of Snow Miser and Heat Miser who wants to take over Christmas and do all of the work on his own.

He was voiced by Brad Adamson.

North Wind first appeared when the Miser Brothers attend the family reunion, where North Wind passively asks Mother Nature if anything bad would happen to Santa, with Mother Nature adding that she would have to let North Wind take over if Santa was put out of commission.

Determined to take the opportunity, North Wind secretly plots to dispose of Santa to take over the North Pole and do the work of spreading Christmas himself. To that end, he had his minions take down Santa Claus' Super-Sleigh at the Miser Brothers' domain, causing Santa to throw his back out and blaming the Miser Brothers for the accident due to their feud. Unaware of what has really happened, Mother Nature punishes both Heat and Snow Miser by forcing them to work at the toy factory so that they can deliver the presents while Santa's back needs to be tended.

Despite going off to a bad start, the Miser Brothers warm up by forming a truce to get the toy factory running, bringing enough presents to the sleigh to deliver. Feeling that their newfound relationship will put his plan in danger, North Wind gets his minions to attach heating and cooling units to the sleigh to prank them, causing both Heat and Snow Miser to fight each other again. This forces a desperate Santa to deliver the presents himself on his sleigh (despite his back injuries).

By the time Santa is riding his sleigh, North Wind arrives to the scene, planning to send Santa into an inescapable vortex. Around the same time, one of the elves named Tinsel learns that the sleigh was sabotaged and that Heat and Snow Miser had nothing to do with it. She informed the Miser Brothers and Mrs. Claus about this just as they find a card portraying North Wind dressing up as Santa, which made them realize the truth about North Wind's plan. Using a spare sleigh, the Miser Brothers work together to save Santa from the vortex and trap North Wind in a parachute, delivering him back to the factory.

Although his plan has been exposed and foiled, North Wind taunts everyone in the North Pole (including the Miser Brothers) that they cannot punish him since they have no authority over him. However, the Miser Brothers call in the only person who does have authority over North Wind: Mother Nature herself. Finally learning the truth of what really happened, Mother Nature angrily grabs North Wind by the ear, calmly assuring to everyone that she will subject North Wind to household chores for the next thousand years as punishment for his actions.

Upon hearing this, North Wind protests at this, but is then transported back to Mother Nature's place, where he is forced to clean up thousands of dishes as part of his punishment. Mother Nature then pardons both Heat and Snow Miser, who end up being on the "Nice" list before substituting for Santa to deliver the presents themselves. North Wind is last seen moaning over his defeat as he continues cleaning up more dishes while the Miser Brothers happily deliver the presents all around the world, much to everyone's delight. 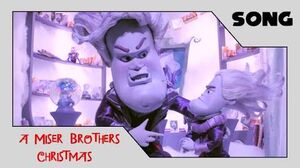 Retrieved from "https://villains.fandom.com/wiki/North_Wind?oldid=3551228"
Community content is available under CC-BY-SA unless otherwise noted.