Floating abilities (as the North Wind)

Cryokinetic powers (as the North Wind)

Use of cryokinetic powers (North Wind).

Get rid of the whale population in Newfoundland and turn the land into a frozen wasteland.

Stop Anne, Elliot, and Watuna from defeating him (failed).

The North Wind (with his human alias Athanasius) is a major antagonist of the 1992 animated Basque-Spanish film, The Legend of the North Wind, its animated series of the same name, and its sequel The Return of the North Wind. He is a mythical entity who puts a spell on Athanasius (another antagonist who tries to get rid of the whale population as the children Ane, Elliot, and Watuna must defeat to achieve his purpose.

Originally, he was voiced by Kepa Cueto in the Basque language version, and Gonzalo Durán in the Spanish version. However, in the English dub, he is voiced by Terrence Scammell in the first film and the sequel.

The North Wind is very despicable and hateful towards the protagonists of the film Ane and Elliot, the Mi'kmaq chief's son Watuna, along with Balli the whale and the whales at the Great Bay of Whales protected by the Mi'kmaq pact, and the descendants of the Mi'kmaqs and Basque whalers using his cryokinetic powers. The North Wind is notorious after being freed from the pot, so he uses his cryokinetic powers to freeze the town of Newfoundland in Canada. Also, one of his most diabolical and loathsome plans is when he has a pirate named Barnaby to aid him on his quest to prevent the children from interfering with him.

As Athanasius' avatar, the North Wind has white skin which has a resemblance to an Inuit's coat and has light blue eyes without pupils.

In one of the flashbacks, the legend says that the great forces of nature Earth, Wind, Fire and Water lived in harmony until the North Wind caused massive damage with cold and hardship in Newfoundland as the two groups of people: the Basque whalers of the San Juan and the Mi'kmaq Indians of Newfoundland by the Great Bay of Whales, joined with the other forces of nature (such as the Sea) and trapped the glacial North Wind in the Sacred Vase. Forming a pact between the Basque Whalers and the Mi'kmaqs, the plan was to prevent the North Wind from ever escaping from the Sacred Vase.

Released from the Sacred Vase by a notorious person named Athanasius on the San Juan ship, the North Wind begins to gain mythical powers to become stronger, thanks to the effort shared by the Basque whalers and the Mi'kmaq natives who were the main cause of freeing him as he makes a plan to wipe out the whale population in Newfoundland, thus causing massive damage to the balance of power and began spreading a massive ice storm and hardship across Newfoundland. By freeing the North Wind, Athanasius is put under a spell as his avatar. After Ane and Elliot discovered what has happened, they get assisted by a Mi'kmaq child named Watuna (the son of the Mi'kmaq Chief), in which he tells him to find a way to seal the powers of the powerful North Wind.

Because Ane and Elliot are the only children under the care of Martin and Captain Galar, the North Wind (controlling Athanasius) has an assistant named "Barnaby" (in the original version "Bakailu"), a pirate and a major antagonist of the film to aide him on his quest and prevent the children from capturing him to save the town of Newfoundland. With the help of the Sea (one of the forces of nature), the children (along with the help of the Basque whalers of the San Juan and the Mi'kmaq Indians) are asked to find ways to defeat the North Wind by joining the forces of nature and trapping him in the Sacred Vase.

The Return of the North Wind

The North Wind makes a reappearance as the main antagonist of the sequel. In the intro flashback, the narrator says that Athanasius tried to free the North Wind, but was stopped by Watuna (son of the Mi'kmaq Chief) and Ane and Elliot (the children of the Basque whalers of the San Juan). At the beginning of the film, Athanasius then escapes the tepee where he was imprisoned as two Mi'kmaq guards do not notice him as he escapes from the tepee after scaring a harmless bear cub (the same bear that Watuna is afraid of in the first film) that finds him in his tepee. Athanasius then steals the Sacred Vase behind the totem pole.

Cornered by the North Wind, Watuna confronts him with a burning torch as he tells Ane and Elliot to stay inside their tent before the North Wind attacks again. Inside the tent, Watuna discusses with Ane and Elliot that only a massive amount of fire can destroy the North Wind as none of them can get any help, since the Sea is frozen during the incident. Later, the trio decide to think in their dreams that the Sea will come to protect the three children. Meanwhile, the Sea managed to help protect Ane, Elliot, and Watuna, assisting the trio to help defeat the powerful North Wind as the trio follow the path to help defeat him. Assisted by the Sea, the North Wind is enraged that the trio managed to escape upon seeing the sculptures of the trio in Watuna's tepee as he decides to take revenge on the trio so they would never escape from the North Wind.

With Watuna captured, the North Wind casts a spell on him that captures one of his feet, thus unable to escape. Meanwhile, Ane and Elliot, with the assistance of Barnaby the Pirate (the former antagonist), arrive in the cave near the cliffs where Watuna was captured by the North Wind, with help from the Sea who was frozen after telling Ane and Elliot to avoid trusting the North Wind by not believing in his lies and to be brave rescuers who can defeat him. The three finally find the Sacred Vase where the North Wind use to be trapped in as Ane, Elliot, and Barnaby confront the North Wind as he brings Elliot to the part where he hid the Sacred Vase in which he wants it to be destroyed to undo the icy spell, despite the Sea's warnings. Elliot then takes the Sacred Vase and throws it to Ane to prevent it from being smashed, which is actually a lie as Barnaby hands out a bottle of lava as Watuna was able to throw it into an oily wreckage. 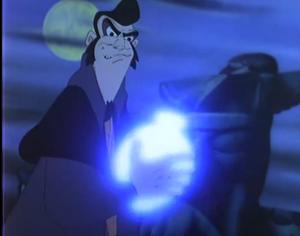 Athanasius stealing the Sacred Vase that is placed on the totem pole by the Mi'kmaq pact.
Add a photo to this gallery

Retrieved from "https://villains.fandom.com/wiki/North_Wind_(The_Legend_of_the_North_Wind)?oldid=4370902"
Community content is available under CC-BY-SA unless otherwise noted.