Keep the nut heist from succeeding in order to maintain his position as leader of the park.

Get rid of everyone who stands in his way (both failed).

Norvirus Raccoon is the main antagonist of the 2014 computer-animated film The Nut Job, and a minor antagonist in its 2017 sequel The Nut Job 2: Nutty by Nature. He is the former ruler of Liberty Park and Surly's archenemy.

He was voiced by Liam Neeson, who also played Ra's al Ghul in Batman Begins, Harry Rawlings in Widows, Clinch Leatherwood in A Million Ways to Die in the Old West, Phango in Khumba, Bad Cop in The LEGO Movie franchise, High-T in Men In Black: International, and himself in Family Guy.

Raccoon is the self-proclaimed ruler of Liberty Park. His leadership over the community may appear trustworthy and noble, but behind the handsome face is (secretly) a calculating and ruthless cad who is consumed by a lust for control and fortune.

Raccoon is first seen leading his group, convincing them to bring more food to store for the winter inside a massive tree in the park. There is only one animal Racoon despises, and that's Surly, a (formerly) very selfish squirrel whose thieving qualities make him an outcast. When Surly tries to rob a nut cart, he makes the mistake of launching it into the tree, blowing it up. Raccoon exiles him from the park, forcing him to live in the city.

Later, Raccoon sends Andie, and a dimwitted squirrel, Grayson, to find food, only to have them get separated. But Raccoon doesn't stop there. His true colors are revealed when he sends his mole henchman and cardinal assistant to sabotage a raid planned out by Surly. Precious, a guard dog owned by King, catches Mole, who reveals Raccoon's evil plan.

After Surly escapes from thugs, he is captured by the Rat Gang, who are working for Raccoon. Raccoon tells Surly his intentions of hurting the other animals. Surly escapes and saves the animals. When they escape in a truck driven by the robbers, Raccoon lies to them about Surly betraying them and locks them up, although Surly and Grayson bust them out later on.

Raccoon tries to throw Surly off, but Mole turns against him. There is a huge chase through the street, which results in Surly landing on a log and Raccoon trying to kill him. The two of them fought as the log began to break. The animals arrive to rescue Surly, who very selflessly sacrifices himself by letting go of the log. The two of them go over a waterfall, killing Raccoon and Surly apparently. After a while, Surly survives the fall. With Raccoon finally ousted, the animals manage to rebuild their home while King and his gang get arrested for their crimes.

A mid-credits scene reveals that Raccoon and Cardinal survived and were drifted out to sea, but sharks now surround them, leaving their fate ambiguous.

In the post-credits scene of The Nut Job 2: Nutty By Nature, it is revealed that Raccoon is still alive and he is swimming back home to exact vengeance on Surly with sharks still pursuing him. 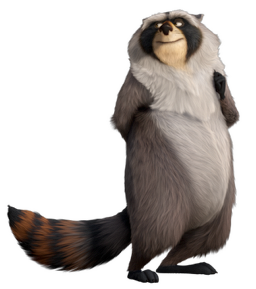 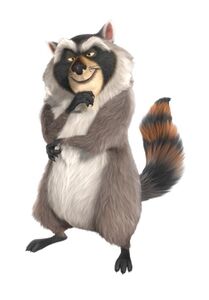 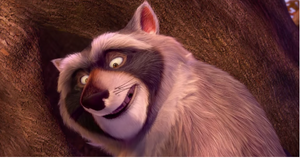 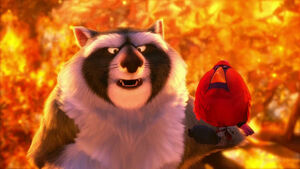 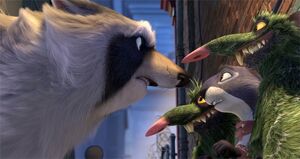 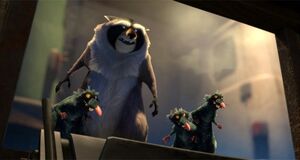 Raccoon with his rat henchmen. 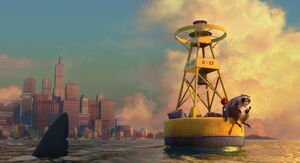 The buoy that Raccoon and Cardinal are on surrounded by sharks.