The Nosakamata are the elite soldiers of the Gedoshu and antagonists in Samurai Sentai Shinkenger.

They are monsters from the Sanzu River (think of it as Asian equivalent to River Styx) that resemble tremendous, skull-like, eyeless, crocodile heads on two legs, and can shoot fireballs from their mouths. There is also a type of Nosakamata naturally born giant, known as the Ōnosakamata, which are.

In Power Rangers franchise, Nosakamata are renamed and reformatted as Spitfangs. They are Nighlok's foot soldiers that resemble skull-like, eyeless, crocodile-heads with arms and legs. They can breathe fire which can be quite readily. Like the Japanese counterparts, Spitfangs can be enlarged to fight the Zords. They were all destroyed by the Samurai Rangers or transported to the Netherworld after Master Xandred's death. 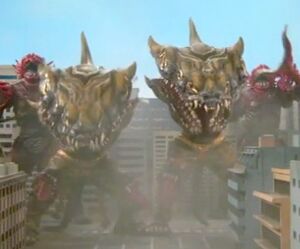 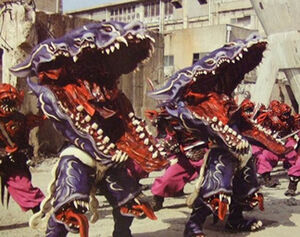 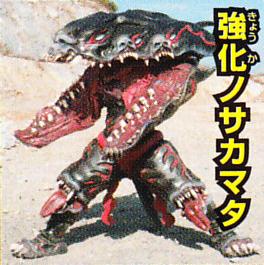 Strengthened Nosakamata
Add a photo to this gallery

Retrieved from "https://villains.fandom.com/wiki/Nosakamata?oldid=3483059"
Community content is available under CC-BY-SA unless otherwise noted.