Roaring with rage and agony.

Restore the glory of the Ashford family.

Alexander Ashford, better known as Nosferatu, is a major antagonist in Resident Evil Code: Veronica and a supporting antagonist-turned-anti-hero in The Darkside Chronicles. He was responsible for the creation of Alexia and Alfred Ashford, but after learning of how they were born, the two experimented on their father, turning him into an abomination.

Alexander Ashford was born as the 6th Earl of the Ashord family. He was the son of Edward Ashford. He helped his father study the Progenitor virus. However, Alexander did not possess outstanding skill in the field of virology and eventually became a researcher for the Umbrella Corporation using his knowledge of genetic engineering. Alexander never became a notable scientist for Umbrella, though he did discover the gene that regulated intellect. He tried to use his discovery to revive the Ashford family’s reputation and took DNA from Veronica Ashford, the family’s matriarch, who he’d become obsessed with. Alexander combined Veronica’s DNA with a dangerous gene that increased intelligence and his own to “resurrect” Veronica. The result was twins, Alfred and Alexia and while Alfred had only slightly above average intelligence, Alexia was a child prodigy with incredible intellect, becoming Chief Senior Researcher at Umbrella's Antarctic Facility when she was only 10. However, Alexander began to grow horrified both at the prospect of the public learning how the twins came into existence and by the two's total disregard for humanity. He became determined that no one ever find out the truth, hiding the records of his experiment in a secret chamber in Umbrella’s Antarctic Base.

But over ten years later, Alfred found the room and began working to get inside, needing the three Ashford family gemstones to unlock it. The first two were easy to obtain, since he and Alexia owned them, and eventually tricked Alexander into giving him the other one. However when Alfred accessed the room, what he found out made him snap, since it revealed that he was just an unintended by-product of Alexander’s experimentation and the disturbing nature of the experiment.

It was around this time that Alexander became concerned with Alexia, who’d become obsessed with the T-Veronica virus, a strain of virus that had been developed from a rare strain of virus found in ancient queen ants and the Progenitor virus. Alexia had also become determined to use it on herself and release it upon the world. Eventually Alexander created an anti-B.O.W. weapon called the Linear Launcher, which he ins

talled in the Antarctic base to be use as a last resort if Alexia ever did go through with her plans. However Alfred, whose bitterness that his father hadn’t created him with the same intelligence as Alexia, led him to capture Alexander. He and Alexia then used their father as a test subject for the T-Veronica virus.

Unfortunately, the T-Veronica needed time, perhaps decades, before a host could fully utilise it's power. Without the proper preperations, Alexander mutated into a psychotic and bloodthirsty monster. Deeming him a failed yet dangerous experiment, Alfred and Alexia chained him in a secret chamber in the Antarctic base hidden next to Alfred's office out of disgust that even as an experiment, he had been a failure.

For 15 years, Alexander remained in the chamber, disturbing all the workers with his cries of agony, this along with his vampire-like appearance led them to nickname the mysterious monster 'Nosferatu'. Eventua

lly, after discovering the hidden door in Alfred's office, Claire Redfield encounters him. She is horrified as he stares up at the ceiling roaring, where she soon leaves, disturbed by what she's seen. He was accidentally freed after Claire and Steve Burnside activated a large drilling machine to escape the Antarctic base. Nosferatu freed himself from most of his bonds and headed after the two, eventually catching up to them at the base’s helipad. He began to grow several tentacle-like appendages and uses them to  knock Steve off of the helipad, leaving him hanging onto a ledge, and attacked Claire. After a brief battle in which she quickly discovered his weakness, she was able to kill Nosferatu by one of three ways

(A) Kept shooting until he finally dropped dead. (B) Used Alfred's sniper and with one bullet, blasted his heart to pieces. (C) Used a combat knife, plunged it into his heart and kept it there for a few moments before he let out a roar and fell down dead.

Somehow, Nosferatu's body ended up in the ocean, where Alexia (who had been awakened by a dying Alfred) had a crane grapple onto his corpse. When Chris Redfield activated the crane, Nosferatu's corpse (where his mutant tentacles appear to have been mysteriously cut off) was pulled out of the water, with his pierce falling off of him. When the crane pulled his body to the left, Chris found Alexia on the other side watching with amusement. Alexia commented that Alexander's mutation into Nosferatu was how she dealt with insignificant bugs. before sending a mutated spider to attack Chris. After defeating the spider, Christ uses the pierce to unlock a hidden door in the mock-up of the original Spencer estate and advanced in his mission. During their final fight Claire and Chris used the Linear Launcher that Alexander himself had designed to stop Alexia in the event she truly did try and follow through with world-domination. The weapon killed her instantly, avenging Alexander and truly ending the Ashford line. Nosferatu's corpse was most likely destroyed once the Antartica base self-destructed.

In the non-canon retelling of Code: Veronica, Alexander/Nosferatu's role is more significant. Here Both Claire and Steve (instead of just Claire) find Nosferatu chained up in the secret chamber roaring. Then they quickly figure out by noticing it was hidden in his office and from photos that he and Alexander Ashford were one in the same. Eventually he manages to free himself and attacks the two at the compound below. Eventually after a grueling battle, they shoot the cut wires holding up a crane, and after tricking Nosferatu to stand in front of it, he is impaled by the crane once it swings down.

Like before, Claire and Chris use the Linear Launcher to destroy Alexia, but this time they learn the weapons function through a recorded message from Alexander himself, before becoming a lab rat for T-Veronica. Alexander expresses his fear about Alexia and her obsession with T-Veronica and begs to whoever finds the message, regardless of whether they serve Umbrella or not, to use the weapon to end his daughter's madness and plans of world-domination. Alexia scoffs at this, commenting that even though Alexander had created her and Alfred, he was nothing more than just a miserable old man. Eventually Alexia is destroyed by the Linear Launcher, avenging Alexander's suffering.

Before becoming a mindless monstrocity, Alexander Ashford was apparently a selfish man, willing to defile the laws of nature and apparently his anscestors remains (how else could he gain her DNA) just to atone for his apparent disgrace to the Ashford line. This was again shown when soon after the twins creation, all he could think of was Alexia's extremely high IQ.

In the Darkside Chronicles, Alexander displayed a much more humane side (at least in his recordings). He was shown to be visibly disgusted and afraid of his daughter's madness, and developed the Linear Launcher to ensure that her plans of world-domination don't become a reality. Something that was apparently not true in Code Veronica, is that Alexander truly cares about his children (or at least Alexia), referring to destroying her as merely putting a merciful end to her insanity.

As Nosferatu, he became nothing more than a mindless beast, wanting nothing more than to kill. It's revealed that ever since becoming his children's lab rat, he has done nothing but howl with rage and/or agony none-stop. Despite this, he does show some remains of his humanity, as after hearing Alfred's pained screams, he immediately escaped his cell and hunted Alfred's killers, Claire and Steve.

Before his mutation, Alexander possessed great intellect in genetics and was a somewhat skilled scientist. As Nosferatu, he possesses a large tentacle-like appendage that sprouts from his back, which he can use to attack, making up for his arms being bound behind his back. Nosferatu can also expel a deadly poisonous gas that can only be cured with a special serum. It was also shown that despite his lack of sight and being bound, he was able to quickly catch up to Claire and Steve on the helipad.

In the The Darkside Chronicles, Nosferatu is shown to be even more ferocious, to the point where Steve noted that if he really tried, he could have broken free of his chains years ago. He possesses three appendages with scythe-like ends that he also uses to move quickly and can leap high into the air. Nosferatu also spits a bile-like substance as opposed to expel poisonous gas and attacks by hurling chunks of ice and explosive barrels. However, his heart is exposed through an opening on his chest, which serves as a major weak point. 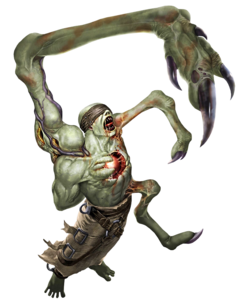 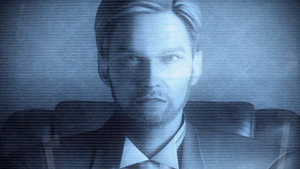 Alexander Ashford, prior to becoming Nosferatu. 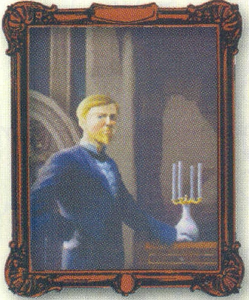 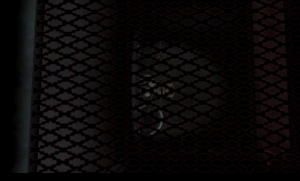 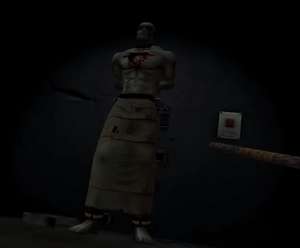 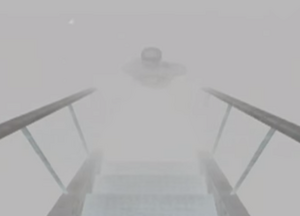 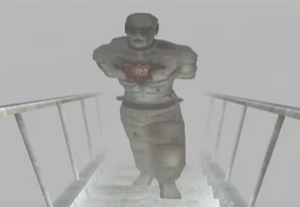 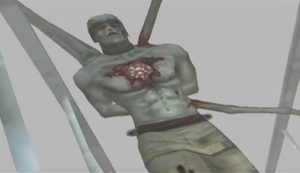 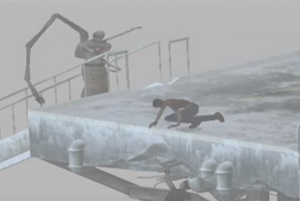 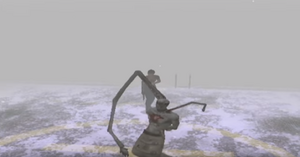 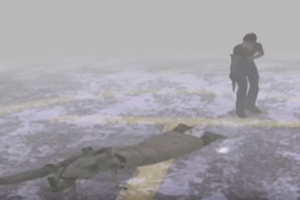 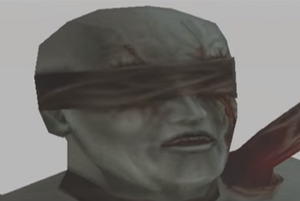 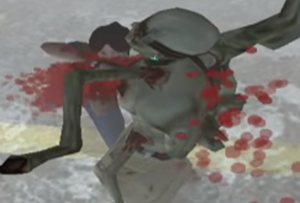 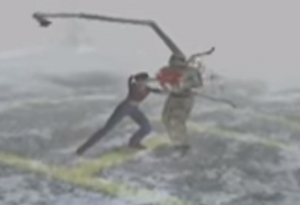 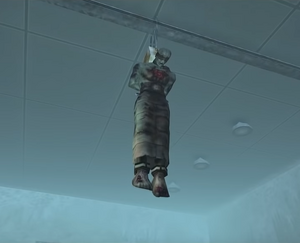 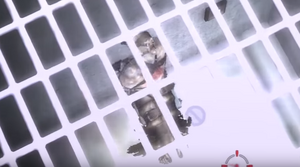 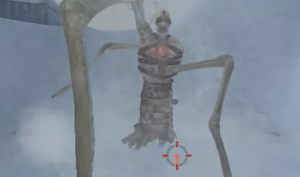 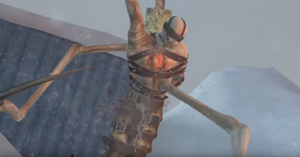 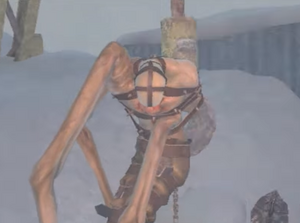 Nosferatu's death (DC).
Add a photo to this gallery

Retrieved from "https://villains.fandom.com/wiki/Nosferatu_(Resident_Evil)?oldid=3980297"
Community content is available under CC-BY-SA unless otherwise noted.