Luring prey into its lair.
Hanging its victims on the ceiling of its lair.
Protecting its Pale Ore.

Eat and devour everything on sight.

Nosk is a minor antagonist and optional boss in Hollow Knight. It is a mimic that takes the form of loved ones to lure unsuspecting prey into its lair.

Sometime before The Radiance plagued Hallownest with the Infection, Nosk was presumed to be an animal that predated by shapeshifting against the prey of Deepnest. Following the Infection, Nosk changed its attributes and became mentally sadistic, toying with its prey by mimicking their lost beloved ones to lure victims to its lair, before killing them and hanging their corpses in its den.

Nosk is first spotted in a small tunnel at the beginning of the Deepnest, where a Vessel similar to the Knight is located spying at the Knight as they venture deeper into the caverns. The entrance to its hideout is behind a breakable wall in the room left to the Deepnest Hot Spring, which the Knight can reach using the Monarch Wings or a Super Dash. Breaking a second wall to the left of the room with the imprisoned Grub leads to narrow tunnels, where the Vessel can be seen in a place where the Knight cannot reach, vanishing once the Knight makes it to where their counterpart stood. This continues until the Knight enters a new room, where the wall behind them suddenly closes, forcing them to continue forward into a dark room filled with hanged corpses of bugs and their impersonator in the middle on an elevated platform.

Upon entering Nosk's lair, the imposter reveals itself with a hissing screech and transforms into its true form before attacking the Knight. Nosk attacks the Knight by charging, leaping, or by spewing acidic blobs of Infection from its abdomen, which it either does by erupting blobs all across the arena, or by jumping to the top of its lair, where it will drop blobs for about six seconds before jumping back down. Nosk is very quick, and will likely take the Knight by surprise when they focus on recovering health. By cornering themself against the edge of the center platform, the Knight will be protected by Nosk's charges and some of its leap attacks. Continue attacking until Nosk is defeated.

Defeating Nosk grants the Knight a piece of Pale Ore, which can be used by the Nailsmith from the City of Tears to upgrade the Knight's nail.

Nosk assumes a new form in the Godmaster content pack, only found in Godhome during the Pantheon trials. Instead of using a Vessel, Nosk obtains the form of Hornet to deceive the Knight before combat. Nosk swaps its first four appendages for two wings, giving it the ability of flight. In this form, Nosk is called Winged Nosk.

In this form, Nosk instead scurries between sides of the arena by swooping towards the Knight. Similar to its first form, Nosk spews blobs of Infection in an eruption from its abdomen or from the ceiling. A new attack involves Nosk letting out a vicious screech, which will spawn two Infected Balloons into the battle.

Defeating Winged Nosk will unlock a switch in the Hall of Gods to the side of the Nosk statue, which will convert it to its winged form and vise versa based on which form the Knight would like to face. 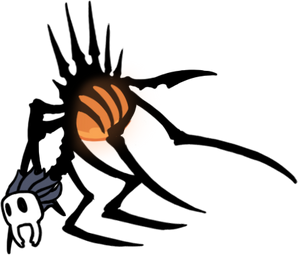 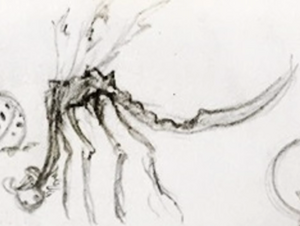 Concept art of Nosk with wings and a longer tail. 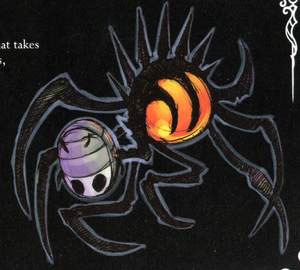 Nosk with a Husk as its head in the Wandering Journal's Book.
Add a photo to this gallery 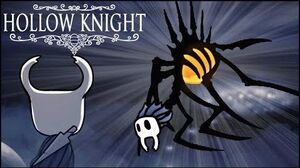 Retrieved from "https://villains.fandom.com/wiki/Nosk?oldid=3768012"
Community content is available under CC-BY-SA unless otherwise noted.