Killing either for food or capturing potential host to build a hive.

Kill or use the Nostromo Crew to become part of its quest to build a hive.

The Nostromo Drone, or also simply known as "The Alien", is an iconic Xenomorph and the titular main antagonist of the 1979 sci-fi/horror film Alien. The creature comes to be after Kane, a member of the Nostromo space station crew, is infected by an alien facehugger and impregnated by it. This leads to the horrifying birth of the alien Drone, which begins to hunt the remaining members of the crew attempting to turn the Nostromo into its own Xenomorph nest. Eventually, the creature is pitted against the last remaining crew member and Alien series protagonist Ellen Ripley in a fateful game of cat and mouse. It is a deceased sibling of the Sevastopol Drone.

It was portrayed by the late Nigerian visual artist Bolaji Badejo in his only film role while its vocal sound effects were provided by the late Percy Edwards.

In the year 2122, while returning from a job in the Solomons, the Nostromo passed through the Zeta II Reticuli system when the Nostromo's onboard computer, MU-TH-UR, awakened them from hypersleep prematurely (Kane was the first one to awaken). The computer had intercepted an apparent distress beacon originating from a planetoid within close proximity to their ship and in accordance with company policy, were required to investigate him.

The Nostromo crew responded to the beacon and took a drop ship to a planetoid (which later came to be known as Acheron). The weather conditions on the planetoid's surface were extremely violent and the ship suffered extensive damage while trying to land. Kane was part of a three-person survey crew that explored the planetoid's surface. Along with Captain Dallas and navigator Lambert, they discovered the ruins of a derelict spacecraft, which had apparently crash landed here many years ago. On the ship, Warren Officer Ellen Ripley determined that it was not a true S.O.S. beacon but a warning signal.

Kane explored the cargo bay of this carrier ship and found a giant nursery filled with thousands of large, bio-organic pods. Drawing his weapon, he examined one of the pods at close range and found that it was actually an egg. His proximity to the egg prompted it to hatch, eschewing forth a facehugger which attached itself to Kane's helmet. The facehugger secreted an acid that bled through the helmet, allowing the organism to attach itself directly to Kane's face and impregnate him with the Alien's embryo.

Kane was brought back to the Nostromo for treatment, but soon recovered and had almost no memory of his experiences on the planetoid. During the crew's dinner, the Alien embryo eventually matured into a chestburster and burst from Kane, killing him. Due to Ash's intervention, it manages to flee further into the Nostromo. When it matured into a drone, the Alien began to kill the ship's crew starting with Brett. It then captured Dallas in the Nostromo's air shafts and cocooned him along with Brett's body in order to produce more Xenomorphs, though the cocoons were later destroyed by Ripley.

By the time Ripley, Parker, and Lambert were the only surviving crew members left, they decided to use the shuttle. While preparing, the Alien snuck up towards Lambert and was about to kill her, but was ambushed from behind by Parker. Despite being in excellent condition, Parker was overpowered by the Alien almost instantly. After finishing Parker off, the Alien returned its attention to Lambert and killed her by mutilating her.

It was nearly killed when Ripley set the ship to self-destruct. However, it hid in the escape ship. Thinking quickly, Ripley opened the airlock and the alien was blasted out the door by a grappling gun. The Alien nearly crawled up the ship's engines, only to be blasted into space by the engine's exhaust, killing it.

In Alien: The Illustrated Story, a graphic novel adaptation of film of the same name that was first published by Heavy Metal Communications in June 1979. The fully-grown big chap in the comic is huge, towering over its victims at anything between fifteen and twenty feet in height, although this size may just be for artistic impression.

In the Alien novel big chap, the facehugger, and the egg look very different from their movie appearance. The design of the Egg is smooth and opaque but become rough and transparent prior to Facehugger release. The Eggs do not open with a petal-like opening as in the film, rather the Facehugger simply explodes violently through the top of the capsule. In the novel the facehugger is gray in colour with a single bulging eye on its back, whereas in the films they are a pale yellow and have no eyes. It also has octopus-like suckers underneath the help it adhere to Kane's face. The fully grown Drone has large eyes. While the creature in the movie had no eyes, Giger's original designs did feature large eyes at the front of the head. The Alien in the novel also has similar regenerative abilities as the Facehugger, and notably does not possess an inner jaw, instead killing its victims with its bare hands.

Since Alien Next Door is a book for children, the Xenomorph in this book has a more simplified design, but is still very tall, has the tail-blade and inner-mouth, and the acid blood. He endeavors to keep his house cleaner than the Nostromo, and searches for his place on a cold, new, alien world: Earth. From Facehuggers to feather dusters, discover how the perfect killing machine relaxes after a day of scaring space marines. This is a big chap from an "Alternate Universe", and thus is not the actual one from the movie canon.

Perhaps due to being the first Xenomorph that made its debut in the franchise (since more facts about its kind was yet to be conceived at that time), it was not given much personality. However, the Xenomorph is very smart, capable to ambush its unsuspecting prey by using ventilations to its advantage, something that all Xenomorphs retain. It also never attempted to attack the entire crew at once and waited until the crew was separated from one another before it began an attack.

It knew that it was vulnerable in its Chestburster state and immediately fled after bursting out of Kane's chest.

In appearance, Nostromo Xenomorph is fit to that of typical Drones, but is outdated due to its tail blade being smaller and more like a scorpion's barb. 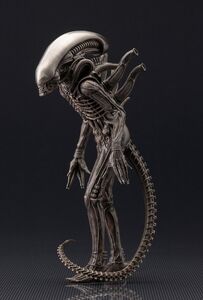 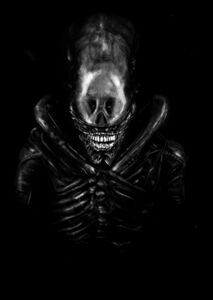 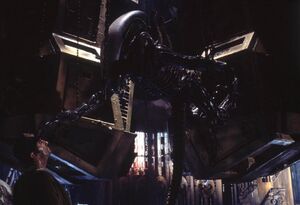 Brett encounters the Nostromo Drone for the first time. 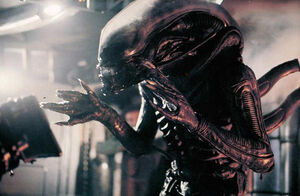 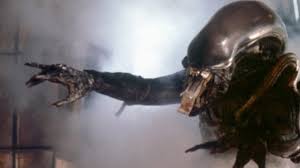 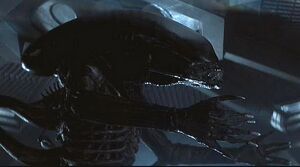 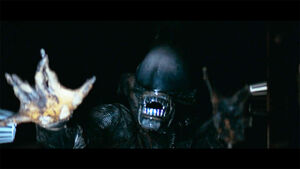 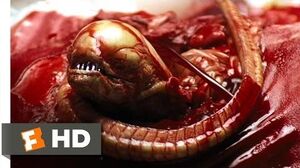 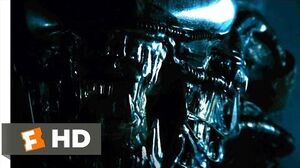 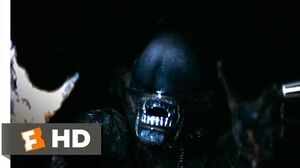 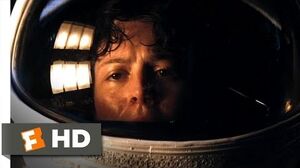