"The Dragon that Must Be Slain"

Experimenting with cybernetics and the body parts he obtains from Vector.

Maintain his rule in Zalem and continue his experiments (ongoing).

Nova is the overarching antagonist of the 2019 film Alita: Battle Angel. He is Alita's archenemy.

He is a scientist in Zalem and its technocratic overlord who employs the Iron City crime boss Vector to collect body parts to use in his experiments and act as the de jure ruler of The Factory, Iron City's governing authority but in de facto it is Nova who is the true ruler while Vector is his proxy. He is also suspected to have caused "The Fall", a cataclysmic event that nearly devastated Earth 300 years ago.

He was portrayed by Edward Norton, who also played Eric Byer in The Bourne Legacy, Aaron Stampler in Primal Fear (1996), Steve Frazelli in The Italian Job, and Derek Vinyard in American History X.

Nova employed cyborgs such as Grewishka to attack people and steal their body parts to send to him so he could use them for his experiments.

After Grewishka was heavily injured in a fight against Alita and went to Chiren, Nova communicated with her and Vector through Grewishka's body to command them to fix the cyborg and send him to fight Alita once more.

Later, as Hugo was climbing on one of the tubes to Zalem in order to reach the sky city, Nova activated one of Zalem's spiked defense rings to kill both him and Alita. Alita managed to dodge it but Hugo was struck by it and torn apart.

At the end of the movie, Nova is seen observing Alita from above as she is entering the Motorball ring to compete for the title of "Final Champion" so she can win and go to Zalem. 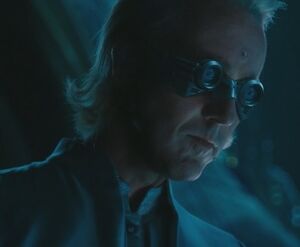