Control over numerous states and kingdoms

Unite Runeterra under one empire.

Noxus, also known as the Noxian Empire, is a powerful, brutal, and fearsome expansionist empire in the lore of the multiplayer online battle arena game League of Legends.

The end of the Great Darkin War led many to hope for an era of peace and rebuilding. But from the ashes of war, a new evil would rise as a cabal of power-hungry sorcerers sought to take the spoils of this ruin for themselves. To achieve their treacherous ends, they planned to resurrect the spirit of the ancient medieval warlord Sahn-Uzal, in hopes of binding his power to their will. But the crafty spirit of the warlord outsmarted the sorcerers and proved too difficult for them to control, and to their horror Sahn-Uzal was reborn as the nightmarish iron revenant Mordekaiser. Free from their control, and free to kill his summoners all in one swift stroke. And so Mordekaiser's reign of terror began.

For generations, Mordekaiser subjugated the people of the mortal realm under his empire, tormenting the living, enslaving the conquered, and slaughtering countless innocents with his dark necromantic powers. At the center of his empire, Mordekaiser raised the Immortal Bastion, a fortress to serve as a gateway between the realms of the dead and the living with which he could further subjugate the Noxii tribes. With hordes of undead and unspeakable magic on his side, Mordekaiser seemed unstoppable.

But like all things, Mordekaiser's reign eventually came to an end, as he was betrayed by members of his own inner circle and the Noxii tribes united as one to defeat the dark lord. As the source of his power was cut away from the inside, Mordekaiser was once again banished to the realm of the dead, and the Noxii tribes claimed his fortress and the surrounding colonies as their own. With the Iron Revenant banished, the Noxii tribes celebrated, but nothing could prepare them for the conflict that would ravage their homeland in the decades to come.

The Founding of Noxus

The chaos and destruction of the Rune Wars, the Noxii tribes took refuge in the Immortal Bastion. The decade was long and terrible, but in the end the Noxii tribes and the Immortal Bastion survived. When the wars were finished, the tribes stepped outside, and after seeing the ruined barrens of their homeland, deemed it necessary to permanently unite as one people in order to survive. They called themselves and their new nation Noxus, and without any land to farm or explore for natural resources, the Noxians ventured outward to claim new territory that they could use.

As hundreds of years passed under the watchful manipulation of the Black Rose, the Noxian noble houses eventually reorganized their nation into the Noxian Empire, an expansionist regime with an elected Grand General who would lead the military, which would serve in their quest to unite the whole of Runeterra, coming into conflict with Demacia, Bilgewater, the Freljord, Shurima, and Ionia over many centuries.

The Invasion of Ionia

Nearly 1000 years after the founding of Noxus, the tyrannical emperor Boram Darkwill (under the influence of the Black Rose) launched an invasion of Ionia, in hopes of finding the key to immortality. The invasion began in the western regions at the Navori province, where soldiers were ordered to kill innocents and steal any magical artifacts they could find. With their pacifist ideals, many Ionians had difficulty fighting back, and many vastayans defected to the Noxians in hopes of finding their way out of disenfranchisement. With their help, Noxian general Jericho Swain was able to claim the Placidium of Navori, but this victory was short-lived as the Ionian resistance leader Irelia cut off Swain's arm and killed his allies, leaving him disgraced and dismissed from the Noxian army.

As the war carried on for years, Darkwill employed more deadly tactics in his conquest as Commander Emystan recruited the mad chemist Singed to develop chemical weapons for Noxus. These were deployed in Ionia to devastating effect, with the aftermath horrifying not only Ionians but many Noxians as well. Riven, a Noxian swordmaster, defected to the Ionians after the weapons were used, and even Darius, the Hand of Noxus himself, was astonished at the damage the alchemist had wrought. But still, the invasion continued.

Frustrated with the years of failure in the invasion of Ionia, many in the empire became concerned that Darkwill was stretching Noxian forces too thin. Many believed the aging emperor was losing his sanity, and after a swift coup, the decrepit Darkwill was overthrown by the now returned Jericho Swain, who ended the war with Ionia and ordered a full retreat.

Taking up the position of Grand General of Noxus, Swain had Darkwill and his allies killed to avoid future conspiracies, and cemented his control of the empire by instating a council known as the Trifarix that would replace the deceased Noxian emperor. The Council of Three would consist of Swain himself, Darius, and The Faceless, each representing one of the three Noxian Principles of Strength: Vision, Might, and Guile respectively.

The failed invasion of Ionia proved to be an embarrassment for Noxus, but Swain remains confident that he can restore the empire's former glory with the future campaigns he has planned. 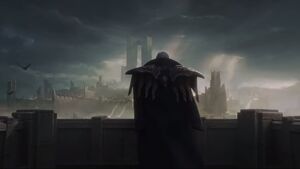 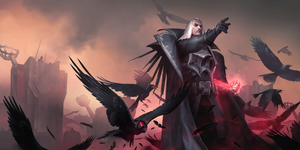 Swain at the front lines. 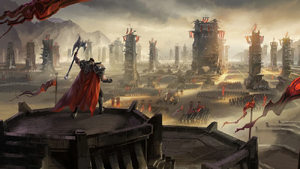 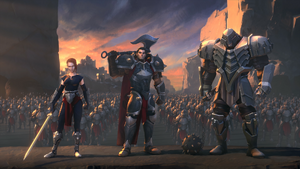 The Trifarian Legion in "After Victory". 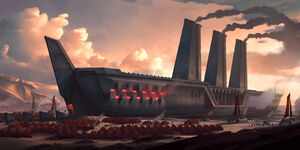 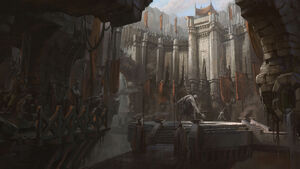 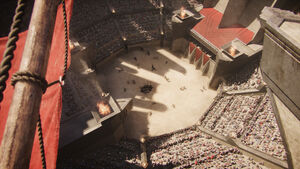 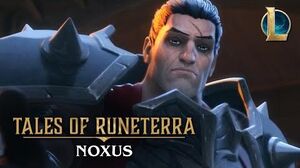 Tales of Runeterra Noxus “After Victory” 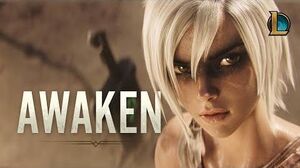 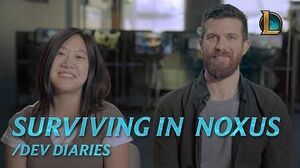 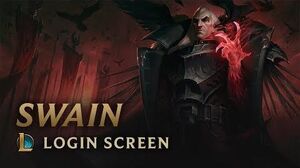 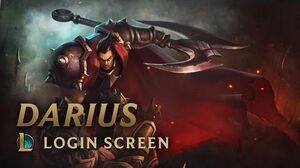 Darius, the Hand of Noxus Login Screen - League of Legends