Destroy humans and all of their creations.

The Nuckelavee is a large Creature of Grimm resembling a Nuckelavee from the American animated webseries RWBY and the main antagonist of the fourth volume. It is a fusion of an Imp and Horse Grimm, presumably created by Salem.

Grimm were created by the God of Darkness, and were later commanded by Salem. In her attempts to destroy and divide humanity, she mutated and merged Grimm, including fusing and Imp Grimm with a Horse Grimm to create the Nuckelavee. Many years later, the creature attacked the town of Kuroyuri, destroying it beyond repair and killing most of the citizens living there; including Lie Ren's parents.

In "Remembrance", Team RNJR comes across the ruined town of Shion, which has been attacked and destroyed by the Nuckelavee. Ren and Nora notice the creature's footprint in the dirt, but they decide to say nothing.

In "Two Steps Forward, Two Steps Back", Ruby and Jaune take Qrow down the path to the ruined town of Kuroyuri, unaware of the Nuckelavee's footprint beneath them.

In "Kuroyuri", Ren and Nora discover a cave where the Nuckelavee has been living and leaving behind tokens of its conquests. Upon looking out the other side, they see the trees ruffling as the Nuckelavee roars and makes its way toward Kuroyuri.

In "No Safe Haven", the Nuckelavee battles Team RNJR, overpowering them with ease. Ren attempts to attack it and gets pinned by the Grimm, forcing Nora to save him but getting beaten and depleted of Aura in the process. Ren breaks free and charges the creature again in a blind rage, but is also defeated and depleted of Aura. Ren soon comes to his senses after some words from Nora and together Team RNJR devises a plan to defeat the Grimm; pinning the humanoid portions arms to the ground while Nora kills the equine portion with Magnhild. Ren then severs the humanoid portions limbs before decapitating it, killing the Grimm and avenging his parents as well as everyone the creature has slain.

The Nuckelavee appears as a unit in RWBY: Amity Arena. It has the ability to charge through enemy forces. The Horse Grimm only attacks structures, but the Imp fights off ground units at the same time.

The Nuckelavee is quite powerful compared to the rest of its kind, being responsible for the destruction of both Kuroyuri and Shion. Its humanoid portion has extendable arms and a discomforting screech that briefly stuns its enemies while the equine portion attacks with its legs and hooves. When it gets angered, the Nuckelavee increases its strength, giving it longer spikes and causing the humanoid portions mouth to open completely. 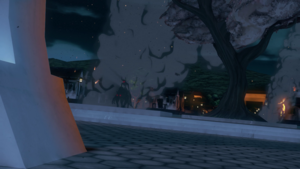 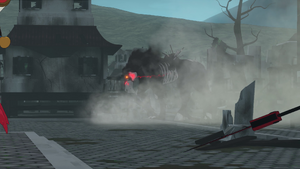 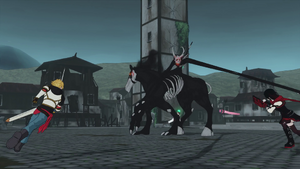 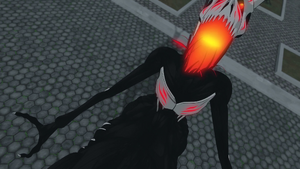 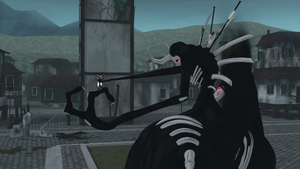 Lie Ren pinned by the Nuckelavee. 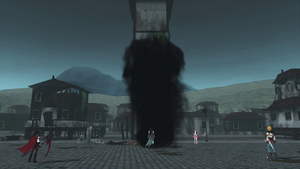 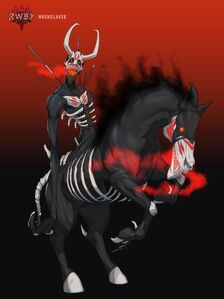 The Nuckelavee as it appears in RWBY: Amity Arena. 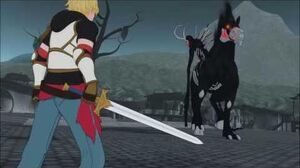