Member of the Duma Faithful

Nuibaba is a minor antagonist from Fire Emblem Gaiden and its remake, Fire Emblem Echoes: Shadows of Valentia. Originally a male arcanist, Nuibaba was heavily redesigned into a female Witch for the remake. In both games, Nuibaba allied with the Duma Faithful and dwells within an ornate chateau on Fear Mountain.

Nuibaba is voiced by Junko Kitanishi in Japanese. In English, she is voiced by Cindy Robinson, who also provides the English voice of Aversa in the Fire Emblem franchise.

In Fire Emblem Gaiden, Nuibaba wears a dark blue cloak that obscures one eye. He has green, snake-like skin, fangs, and his exposed eye is light pink.

In Fire Emblem Echoes: Shadows of Valentia, Nuibaba is a pink haired and purple-skinned undead woman in a black dress with a golden masquerade eye mask that covers her scarred left eye. Carved on this mask is the death-mask of her former lover. Nuibaba also has two large black horns with small purple grooves.

Unlike most members of the Duma Faithful, Nuibaba became a Witch after selling her soul to Medusa instead of Duma. As such, she did not become a mindless puppet of the War Father, but a cruel and narcissistic woman with little compassion for others, including Duma. Similarly, Nuibaba shares Jedah's obsession with capturing Brand bearers, but unlike the High Priest of the Faithful she sought to sacrifice them to Medusa in exchange for immortality and eternal youth. Until obtaining a Brand-bearer, however, Nuibaba caught and sacrificed beautiful maidens from all across Rigel. These obsessions likely stemmed Nuibaba's disfigurement and subsequent betrayal by her former lover and sister.

Nuibaba is also rather manipulative of others. Taking advantage of Berkut's fiery spirit, she successfully offered him a cursed mirror despite his distate for the Faithful and their magic. Later, Nuibaba lured the Brand bearer Alm to her manor by sending him an illusion of Celica claiming that she was captured.

In the past, Nuibaba was once a pretty young girl who lived happily with the man she loved. However, one night, she was attacked by bandits who left a hideous wound on her face, causing the man to start avoiding Nuibaba in favor of her younger sister. Growing tired of her presence, the man and the younger sister lured Nuibaba deep into the woods and pushed her off a cliff. As Nuibaba lay dying, Medusa appeared before her as a ghastly apparition, attracted to the scent of death. With the promise to restore her and extend her lifespan, Nuibaba agreed to form a contract with Medusa. Upon being revived, Nuibaba took revenge on her former lover and sister for backstabbing her.

After secluding herself to the woods, she became obsessed with power and beauty, eventually becoming a witch, and began kidnapping numerous beautiful Rigelian women for several years, sacrificing them to keep her longevity and youthful beauty.

Tormenting the locals in her vicinity alongside the cruel General Jerome, she kidnapped a young girl named Tatiana, whom not only did she plan on sacrificing to Medusa, but also was kept captive as a means to force Zeke into fighting for the Rigelian army alongside Jerome.

After Berkut convinces Emperor Rudolf to station him and his army at the border in case the Deliverance breaches the Sluice Gate and enter into Rigel, Nuibaba approaches Berkut as he makes preparations to go to the border.

Though antagonizing Berkut at first regarding his failure to defeat Alm, Nuibaba insists that she wishes to aid Berkut. Though Berkut refuses such aid, Nuibaba warns him that another failure will result in Rudolf refusing another chance to Berkut. She then speaks of the power that the Duma Faithful possess, and how Jedah acquired power by offering his daughters to Duma.

Berkut is disgusted by this, and still insists on fighting Alm with his own strength. Nuibaba then asks that Berkut at the very least take a mirror that is filled with her sorcery to battle, and shatter the mirror should Berkut ever be cornered in battle. Though reluctant, Berkut takes the mirror in the end. Nuibaba's mirror is broken by Berkut in the end, nearly granting him victory, but the spell is broken by a charm Alm had gotten from Celica years ago.

Having failed to capture Alm using Berkut, Nuibaba resorts to using another means to lure Alm to her. Creating a phantom of Celica, she communicates with Alm, telling him that Celica is being held prisoner at Nuibaba's abode.

When he enters her Abode, Nuibaba appears before the Deliverance and reveals to Alm that the Celica Alm had seen was not real, which Alm had suspected. However, despite her trap and using the power of Medusa, Nuibaba ultimately falls in battle against the Deliverance, thus ending her machinations as well as freeing Tatiana and ultimately allowing Zeke to betray Jerome. 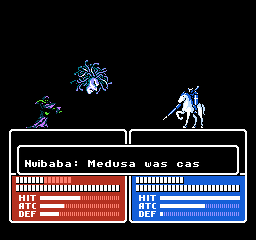 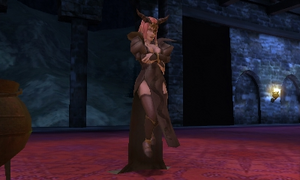 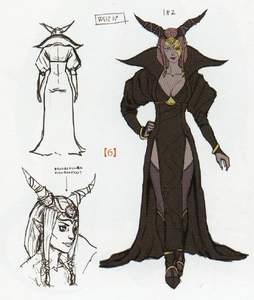 Concept art of Nuibaba for Fire Emblem Echoes: Shadows of Valentia. (The Japanese text identifies the smaller death mask on her mask.)
Add a photo to this gallery

Retrieved from "https://villains.fandom.com/wiki/Nuibaba?oldid=4178517"
Community content is available under CC-BY-SA unless otherwise noted.