Redeemed Pawns
Nuk, Yak and Sumac are the three wolves who served as the replacement for the original trio and Niju's followers in Balto II: Wolf Quest.

They were all voiced by the late Joe Alaskey, Jeff Bennett, and Rob Paulsen respectively.

Nuk, who while is the largest, is also the least intelligent member, personally claiming he'd rather just eat than use his brain. Yak seems to be the most intelligent, but seems to have an increasing difficulty with fleas. Sumac appears to be the smallest and most skittish individual, as well as laughing frequently. They first started off as villains, but later, they refused to continue forth with Niju's evil plan when they finally realized the truth of the situation around them. The three aided Aleu in her return to the ice flow, resulting in her takeover of the pack's future.

They disappeared across the ocean with Aleu and the rest of the wolves. 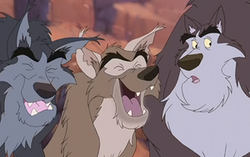 Nuk, Yak, and Sumac.
Add a photo to this gallery

Retrieved from "https://villains.fandom.com/wiki/Nuk,_Yak_%26_Sumac?oldid=3880349"
Community content is available under CC-BY-SA unless otherwise noted.