To kill all of America's presumed enemies.

Brutal Soldier
Nuke, real name Frank Simpson, is a villain in the Marvel universe and an antagonist to Daredevil and Captain America. A psychotic super soldier with a jingoistic mentality.

He was a test subject of the Weapon Plus program, the super-soldier program that had created Captain America and would later transform Wolverine into a killing machine.

Later, he would do black ops for the American government.

The Kingpin paid Nuke's handler to unleash Nuke on New York and to take out his enemies but Nuke was defeated and seemingly killed in battle with Daredevil and Captain America.

He would eventually take up the mantle of the Scourge of the Underworld and join the Thunderbolts.

Experienced soldier, Nuke was a savage and brutal fighter, and very good with all types of firearms, with the heavy gatling gun Betsy being his weapon of choice, and very deadly in knife combat, he's also an expert in hand to hand combat despite his insanity. 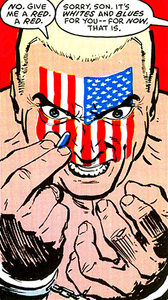