Kill RoboCop for interfering with their business.

The Nuke Cult, also called the Cult of Nuke, was a fanatical and vicious cult of criminals (still more like typical drug dealers rather than cultists) obsessed with the Nuke drug they created and they are led by their charismatic leader Cain, the main antagonist of RoboCop 2.

These people followed the will of the extremely insane and deluded Cain. Their hideout is Sludge Plant. The cult seems to worship figures like Jesus, Mother Teresa and Elvis Presley. Also there is a photo of Oliver North testifying to Congress during the Iran Contra scandal. His skeletal remains were honorably displayed within a glass encasement in a corner inside the building.

After Detroit's law and order in hiatus due to police going on strike in addition to the power vacuum left in the Detroit underworld (caused by the destruction of Clarence Boddicker and his gang), Nuke Cult decided to set up shop in the Old Detroit and wield its influence. When RoboCop and his partner Anne Lewis raided a narcotic manufacturing plant, it is revealed to have been producing Nukes, new designer drugs which have been plaguing the streets of Detroit. RoboCop kills all the criminals, except for a young criminal named Hob, who shoots him and escapes.

Nuke's distributor, the power-hungry Cain, feels threatened by the Delta City plan. He fears that he will lose his market if the city is redeveloped into a capitalistic utopia. He is assisted by his girlfriend Angie, Hob, Catzo, and Duffy, a corrupt police officer and Nuke addict. RoboCop tracks down Duffy and beats Cain's location out of him. He confronts Cain's gang at an abandoned construction site, but is overwhelmed and dismembered. The criminals cut apart his body and dump the pieces in front of his precinct. Cain has Duffy vivisected for revealing their location, and forces Hob to watch.

The Nuke Cult was weakened after RoboCop, restored and reinvigorated, resumed his destruction of the cult and proceeded to arrest and take out the gang, in which Cain was injured and brought to a hospital. Hob managed it to become the new leader and tried to legalize Nuke through bribing the Mayor Kuzak who sought a way to pay the city's debts to OCP. This plan was revealed to the OCP and Dr. Juliette Faxx, who chose the brain of Cain for the new RoboCop, sent him to the meeting where he killed everyone with the exception of the Mayor.

Ironically, the founder of the Nuke Cult was also the demise of it. 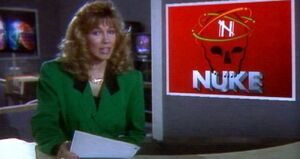 A TV news report on the fanatic criminal organization known as the Cult of Nuke. 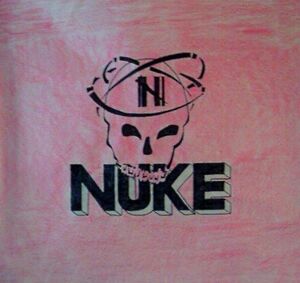 The symbol of the Nuke Cult.
Add a photo to this gallery

Retrieved from "https://villains.fandom.com/wiki/Nuke_Cult?oldid=3830641"
Community content is available under CC-BY-SA unless otherwise noted.