Nulgath is a fiend of the Underworld and a General of the Abyss. He rules the hidden realm known as Tercessuinotlim. He was formerly known in his previous form as Miltonius. His rival is, no doubt, his former student, Dage the Evil.

Through the ages, the archfiend Nulgath has taken on many forms and has been known by many names with one of those names being "Miltonius". Recently, however, it was revealed that each of his previous forms was merely larval stages of the diabolical evolution into a more demonic form. Now Nulgath serves no master and has his own lust for power and hunger for the souls he captures through his contracts with one of his "clients" being Dage the Evil.

After reality is restored from the alternate timeline caused by Drakath, Nulgath and Dage the Evil catch up to the group as Gravelyn tells them, Sally, and Noxus that the Shadowscythe Army will hunt down Drakath and make him pay for what he did to Sepulchure.

Dage the Evil later goes to war with Nulgath. Nulgath is served by Klunk, Dilligaf, his chief torturer Dilligas, and Revontheus the Dark Angel. Nulgath's army consists of Skeletal Warriors, Skull Warriors, Undead Infantries, Infernalfiend of Nulgath, Dreadfiend of Nulgath, Dark Makais, and Bloodfiends. Dage managed to secure the Oblivion Gate and traps Nulgath in the OverSoul dimension. Nulgath claims that Dage the Evil unknowingly left him a gift as he begins his next plot.

When the players end up in the afterlife after being killed by Drakath, Nulgath appears before them and agrees to get them out of the afterlife in exchange that they take out Death upon signing a piece of paper. Nulgath states that failure to take out Death means they get transferred to the Abyss. The players were successful at doing Nulgath's assignment.

Nulgath contacts his commander Dirtlicker stating that the dimensional plans of Lore and the OverSoul dimension is almost in re-alignment and instructs him to establish a portal for his return to Lore as a way to permanently link the two-dimensional planes. To ensure that Dirtlicker doesn't end up like the last person who failed him, Nulgath has Dirtlicker enlist the players for help.

Nulgath is an archangel who was sucked into an alternate reality while trying to seal the rift. Since then, Dage the Good has been the undisputed champion of all things good and noble in the Mirror Realm.

In the alternate timeline caused by Drakath, Dage the Evil, Noxus, and Nulgath join Zombie King Alteon into bowing before Sepulchure after he managed to slay Death and cause everyone who recently died to return as Zombies that obey his every command. 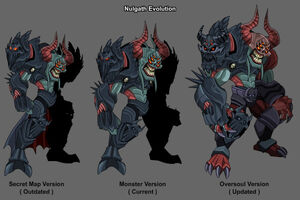 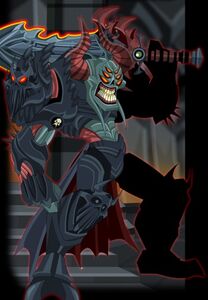 Retrieved from "https://villains.fandom.com/wiki/Nulgath?oldid=3496522"
Community content is available under CC-BY-SA unless otherwise noted.