Member of the Organ Trafficking Conspiracy

Delivering organs from the deceased players to the buyers.

Ensure the games go on without incidents.

Deliver and sell the deceased players' organs which were harvested with the help of Byeong-gi (both succeeded until his death).

Number 28 is a supporting antagonist of the first season of the South Korean Netflix drama series Squid Game.

He is a masked worker involved in the organ trafficking conspiracy, helping Byeong-gi with winning the games in exchange for him harvesting organs from eliminated players to be sold. He is also the partner and neighbor of Number 29, who had his identity stolen by the police detective Hwang Jun-ho.

He was portrayed by Heo Dong-won.

Number 28 is a greedy and corrupted worker who is willing to secretly break the rules of the Squid Game by giving information about the future games to a doctor in exchange for him harvesting organs from dead players. In addition to his lack of empathy toward players, he is also a perverted man who raped a woman that was still alive upon being brought to the conspirators' secret surgery room and also is the one who beat her to death before they extracted her organs.

Despite this, Number 28 also shows sort of honor defending Number 29 from the other conspirators, who were going to kill him because of distrust. After Jun-ho appeared in their hideout, Number 28 also defends Number 29 when the others complain about his partner's absence in the last night. Number 28 claims he does so because he owes Number 29 for saving his life during a dive. Once suspicious that Jun-ho is not truly his partner, however, he threats Jun-ho for him to reveal himself. When this backfires at him, he ends up showing a cowardly side, quickly betraying the other conspirators upon being threatened and telling everything to Jun-ho in hopes of being spared, but this also fails.

Number 28 is a worker part of the masked men during the 33rd Squid Game. Along with Number 29, two masked soldiers and a manager, Number 28 is involved in the organ trafficking conspiracy. At some point, between the first game and the players rejoining the games, Number 28 and the other conspirators made a deal with Player 111, a doctor called Byeong-gi, giving him information about future games in exchange for him extracting the organs of deceased players to be sold. Numbers 28 and 29 are divers, so they are the ones in charge of delivering the organs to the buyers, who arrive on ships.

Number 28 first appears after detective Hwang Jun-ho infiltrated in the Squid Game by killing and taking the identity of Worker Number 29. When Jun-ho goes to the room of Number 29, Number 28 stands in front of the door of his own room and observes his neighbor trying to unlock the door. At night, after the curfew, Number 28 coughs trying to communicate through morse code with Number 29. In the next room, Jun-ho hears the coughs but ignores it.

In the following day, when the workers are standing in front of their doors for the count of staff members, Number 28 stares at his neighbor again, which is noticed by Jun-ho. Later, Number 28 meets the other conspirators in their underground hideout. The others notice he is alone, and one of the soldiers asks where Number 29 is. Number 28 explains that Number 29 didn't show up and he doesn't know if something happened to him. The soldier says that Number 28 will have to deliver the organs by himself, but Number 28 refuses to do it because it is dangerous to go underwater alone. During the night, Number 28 coughs trying to communicate with Number 29 again. This time, Jun-ho hears it and figures out that his neighbor is calling Number 29 through morse code.

In the next morning, during the count of staff members, Number 28 coughs again while standing beside Number 29. This causes Jun-ho to follow him when the count is over. Later, the two work together to carry the bodies of the eliminated players from the third game, Tug-of-War. Number 28 is helped by Jun-ho to put a player, who is still alive despite being mortally wounded, inside a coffin. Number 28 then marks this coffin with blood, before it is taken to the furnace with the others. Number 28 and Jun-ho carry the coffin to the furnace, but it is sent to the conspirators' underground hideout instead of being incinerated.

During the night, after the curfew, Number 28 goes to the hideout. This time, Jun-ho follows him instead of returning to his room. Along the way, Number 28 asks Jun-ho about his absence last night and explains that the other conspirators wanted to kill Number 29 for not trusting him. Because Number 29 saved his life during their last dive, Number 28 felt motivated to convince the others to spare him. However, Number 28 warns that this is the last time Number 29 will receive his help and tells Jun-ho not to disappear again.

Arriving in the underground hideout, the two soldiers reprimand Jun-ho for not showing up last night and Number 28 tells them that he already warned Number 29 about it. The soldiers insist that a warning is not enough because they could not even deliver the organs last night with Number 29's absence. Hearing the complaints, Number 28 defends Number 29, saying that the soldiers can deliver it themselves and explains that it is hard to find divers like the two of them in this place. Looking around, Number 28 sees that the doctor still didn't finish to extract the organs from the first body and tells him to hurry because they have to deliver before the ship leaves. Byeong-gi replies that it's hard to work without being able to sleep and eat well, and having to fight to survive every day. Number 28 tells the doctor that this is why they have been telling him what the next game is and giving him extra food to keep him alive.

The masked men talk while the doctor extracts the organs, discussing about a player who was eliminated in the first game (Red Light, Green Light), referring to this person as a "zombie". They say that this person was is still alive upon being brought to have the organs extracted and woke up in their surgery room. Number 28 says he almost died to make this delivery, but they didn't get the full price because the person only had one kidney. Number 28 adds that many players signed away their bodies or are terminally ill, so they will be lucky to get one with the organs intact. Jun-ho then asks what happened with the zombie and Number 28 replies that he used a crowbar to beat him to death. The conspirators are surprised by Number 29's question, because he was there and saw everything. Jun-ho tells them that he was a bit out of it at the time, leaving them confused. One of the soldiers recalls that Number 29 was the one who got rid of the zombie's body. Before they can ask Jun-ho anything else, the doctor tells all of them to shut up because he wants a quiet place to work.

When the doctor finishes his work, the organs are put inside backpacks and given to Number 28 and Jun-ho to be delivered to the ship. Number 28 and Jun-ho go through secret passages in the facility. While going down a ladder to a tunnel, Number 28 warns Jun-ho not to touch the bomb on the wall, explaining that the passage is the passage is an escape route to the VIPs. Once the VIPs escaped in case of an emergency, the bomb is set to detonate and seal the tunnels. Jun-ho questions who the VIPs are, and Number 28 replies they are none of his business.

Once they are down in the tunnels, Number 28 surprises Jun-ho by pulling out a knife and pointing it at Number 29's throat. Number 28 asks why Number 29 wants to know who the VIPs are. Jun-ho replies that he is just grateful for the diving gear and the secret passage, because it's like the VIPs prepared it all for them. Number 28 explains that Number 29 is asking too many questions and his voice also changed, causing him to become suspicious. Number 28 demands Number 29 to remove the mask. Jun-ho wonders if this is really necessary. Number 29 threats to kill him to see his face in case he refuses to do it. Jun-ho does it, but then surprises Number 28 by pulling out his revolver. Caught off guard by the gun, Number 28 complies when Jun-ho demands him to remove his mask too or he will kill him.

While at Jun-ho's gun point, Number 28 hears an infuriated Jun-ho reveal that the man who they were calling "zombie" only had one kidney because he donated the other one to him. Jun-ho tells Number 28 that the masked men murdered his brother, Hwang In-ho. Visibly scared to be threatened by the gun, Number 28 quickly corrects that the "zombie" was a woman. Because Jun-ho initially doesn't believe him, Number 28 confesses that the conspirators took turns raping the woman before opening her to extract the organs. Number 28 adds that Jun-ho can check details of the personal information of all the players in a list that is in the leader's room, explaining that their leader is the Front Man, the staff member with a different mask. Number 28 tells Jun-ho the location of the leader's room and is relieved when he sees Jun-ho lowering his weapon. Thinking that Jun-ho will spare his life, Number 28 proposes an alliance, saying he will help Jun-ho find his brother and will also give him all the money he got selling organs. Jun-ho, however, shoots Number 28 in the head, killing him.

Later, when the Front Man finds out about the organ trafficking conspiracy, he also finds Number 28's body. The Masked Men identify that this dead conspirator is Number 28 and the Front Man says that the person who killed him is still out there. Removing the bullet from Number 28's head, the Front Man discovers that it is from a model of revolver used by the Korean police, which means that a police officer is infiltrated among the staff of the games.

In the following day, as players are going up the spiral staircases on their way to the location of the fourth game, they are surprised at the sight of the corpses of Byeong-gi and four conspiratorial masked men, including Number 28, hanging from their wrists on a giant mobile. A manager explains that these individuals broke the rules of the games for their own benefit, tainting the ideology of equality of the competition. 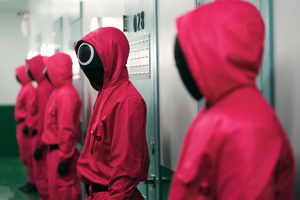 Number 28 looks at Hwang Jun-ho who is disguised as the Worker Number 29. 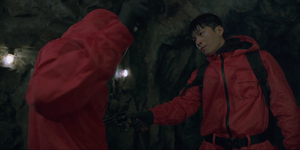 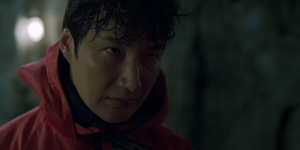 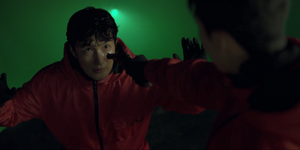