Number 96 (also known as Dark Astral) is the recurring antagonist in Yu-Gi-Oh! ZEXAL. He is the dark counterpart of Astral.

He was voiced by Miyu Irino in Japanese and Marc Thompson in English.

During the battle between Astral and Don Thousand, a shard of Thousand's malice was trapped inside Astral. It eventually developed into the form of Number 96.

He appears similar to Astral but with a jet black body instead of light blue. Unlike Astral, whose right eye has a white sclera, Number 96 has a black sclera, but a gold iris on his left eye, like Astral. However the markings where Number 96's eyebrows would be are longer, the top ends stretching into his forehead and becoming crooked (resembling horns of some sort) and the bottom ends having a spike on each that line his nose. These marks are red instead of his other green marks. He is capable of forming a ghostly tail and having "tentacles" that stretch out from his body.

When Number 96 used "Rank-Up-Magic Barian's Force" on his card form, his own physical appearance significantly changed. He gained a Barian Emblem on his forehead, an eye on his abdomen much like Don Thousand and a pair of wings with red jewels. His muscle mass grew considerably and also became more pronounced. His hair gained volume, his right eye is no longer black and his voice deepened significantly but only for one episode.

Possession: He is able to possess people like regular "Numbers" and have full control of them. He is also capable of possessing Astral, but only when the Emperor's Key has been removed. Unlike other Numbers, he can also manifest and even Duel opponents without a host.

Immunity: After obtaining the power of "Rank-Up Magic Barian's Force", he effectively became immune to being re-absorbed by Astral. Also, after receiving and adjusting to the power of Chaos, his powers were immensely magnified.

Teleport: He can open portals.

Energy: He is able launch extremely powerful energy balls much like the Barians. 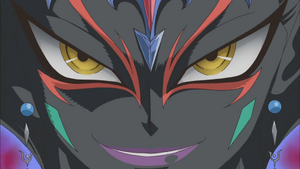