Viceroy of the Trade Federation

Control over the Trade Federation and the Separatist Council

Vast sums of wealth and money.
Control over the galactic economy and finances.
Access to vast armies of battle droids and tanks.

Leading the Trade Federation and the Separatist Council.
Leading the Confederacy of Independent Systems.
Profiting off of the war.

Get the Queen of Naboo to sign a treaty and make the invasion of Naboo legal.

Kill Padmé Amidala and get revenge for the events of the battle of Naboo.
Support Count Dooku and the Confederacy against the Galactic Republic (all failed).
Aid Darth Sidious in his plans to overthrow the Republic (succeeded).

He is the Viceroy of the Trade Federation and later became a high-ranking leader of the Confederacy of Independent Systems as the chairman of the Separatist Council. He was one of Darth Sidious' first, and most important, pawns in his plan to attain ultimate power. Following the deaths of both Count Dooku and later General Grievous, Gunray became the de-jure leader of the CIS. However, he was ultimately slain by Darth Vader along with the other members of the Separatist Council on Mustafar.

When he was the Viceroy of the Trade Federation, Nute Gunray was powerful, opportunistic, deceptive and ready to kill for financial gain. He showed himself as being a stingy and calculating entrepreneur who was mainly concerned with maximizing profits and his own well-being. Because of his greed, he was very receptive to Darth Sidious' influence, who used him as a pawn for his sinister plans, when the Republic imposed taxation on commercial roads.

Under Palpatine's orders, he was hesitant to break the law, as he demonstrated a good sense of organization and relatively good leadership. Due to Amidala's role in his defeat on Naboo, Gunray greatly resents the politician and made several attempts on her life in the years following the invasion of Naboo. He generally prefers to flee when conflict occurs, leaving this task to his droids.

However, he was still capable of taking matters into his own hands when he has no choice anymore, as he knocked out Commander Gree from behind during Ventress' attempt to rescue him on the Tranquility. 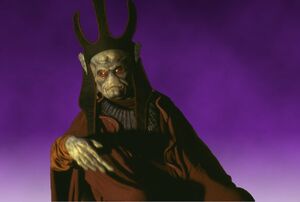 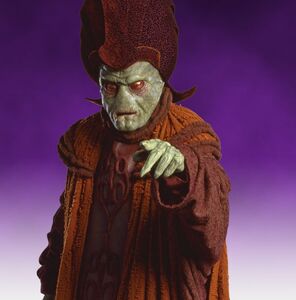 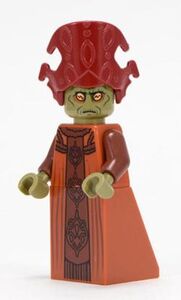 Nute Gunray learning from his droid, TC-14 that the Chancellor's ambassadors are actually two Jedi.

Gunray ordering Daultay Dofine to distract the Jedi while he contacts Darth Sidious.

Nute Gunray and his men speaking to Darth Sidious.

Gunray seeing Dofine being verbally reprimanded by Sidious for saying his scheme is going to fail.

When Sidious orders him to begin invading Naboo, Gunray questions the legality of the action, but Sidious quickly silence his concerns.

Gunray having been ordered by Sidious to kill the two Jedi.

"They must be dead by now. Destroy what's left of them!"

Gunray and Haako hearing that the Jedi survived the assassination attempt.

"Seal off the bridge!"

When the Jedi make their way to bridge, Gunray orders the blast doors to be sealed shut.

However, Gunray sees the Jedi are able to melt the blast doors down.

Gunray watching the Jedi being overwhelmed by shield-generated droidekas.

Gunray and Haako receiving a transmission from Queen Amidala of Naboo.

When Queen Amidala demands Gunray and his forces to leave, Gunray feigns ignorance of having to cease his blockade and meeting with the Chancellor's ambassadors.

After finishing the transmission with the Queen, Gunray insists it's too late to hear the Galactic Senate's word about the Federation invading Naboo.

Gunray ordering all communications down on Naboo to be disrupted.

Gunray and Haako speaking to the B1 droid commander through a hologram.

Gunray and Haako telling the droid commander the Jedi may snuck on board their ships and are now on Naboo.

Gunray warning the battle droids to not underestimate the Jedi.