The Darkest of the Hillside Thickets

Messenger of the Outer Gods

Release the Outer Gods and rule the cosmos.

Nyarlathotep is the main antagonist of the 2007 album Shadow Out of Tim by the Darkest of the Hillside Thickets.

Like in the Cthulhu Mythos that was penned by the late H. P. Lovecraft and his contemporaries, Nyarlathotep is the herald of the Outer Gods whose chief goal is to release the eldritch gods and destroy mankind. Unlike his brethren, Nyarlathotep's is far too reminiscent of humanity. Taking a key interest in humanity, Nyarlathotep would take on thousands of avatars to lead mankind into destruction. As a result, every atrocity that was recorded by human history could be traced back to Nyarlathotep's corrupting influence. He would be worshiped by many cults dedicated to his many avatars, most prevalently being the Black Pharaoh.

Marine biologist Dr. Timothy Vess finds himself getting possessed by an alien intelligence known as a Yith as he further found himself confronting several cosmic horrors and accumulating knowledge that mankind was never meant to know. Eventually, Tim meets a man described as possessing dark secrets who is explicitly stated to be Nyarlathotep in one of his many avatars. He gave Tim the book of the dead (all but stated to be the Necronomicon). From the book, Tim learns of Nyarlathotep's true nature and the impending apocalypse that he is intending to cause by releasing the other eldritch gods. The song ends with Tim citing a maddening incantation and the end of the album implicates that he had lost his sanity. 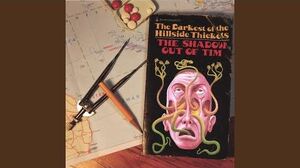 Nyarlathotep
Add a photo to this gallery
Retrieved from "https://villains.fandom.com/wiki/Nyarlathotep_(The_Darkest_of_the_Hillside_Thickets)?oldid=3557636"
Community content is available under CC-BY-SA unless otherwise noted.