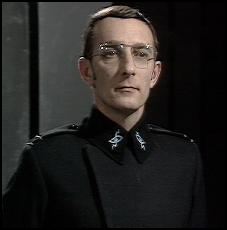 Nyder is the secondary antagonist of the Doctor Who story "Genesis of the Daleks".

He was portrayed by the late Peter Miles, who also played Professor Whitaker in "Invasion of the Dinosaurs".

Nyder was the security commander of the Kaled bunker which functioned as the base for their scientific elite, who had been set up to try and end their war with the Thals or at least make sure their race survive it. Nyder was fanatically loyal to the elite's leader Davros, even insisting that Davros was never wrong, and collaborated with him in the development of the Daleks.

Nyder encountered the Doctor and Harry while visiting the Kaled city to requisition supplies from a resentful General Ravon and took them back to the bunker for interrogation. He later discovered they had escaped and were warning the Kaled government about the Daleks, and, like Davros, guessed that the sympathetic scientist Ronson had helped them. Shortly after, they were visited by representatives of the Kaled government who ordered the work suspended pending an investigation.

Davros' response was to decide to wipe out the Kaled people and replace them with the Daleks. Although momentarily shocked, Nyder went along with his plan without question: The two of them contacted the Thals and provided them with a formula that they used to destroy the Kaled city's protective dome, allowing them to destroy the city with a rocket. This achieved, they blamed Ronson for the treachery, having him killed, and then unleashed the Daleks on the supposedly victorious Thals.

Nyder learned that Gharman, his opposite number in the scientific department, was becoming concerned about how pitiless Davros was making the Daleks, a view shared by others. Nyder approached Gharman, claiming to share his ideas, and got him to reveal the names of those who agreed with him...then revealed Davros was listening in and took him prisoner. They also captured the Doctor, Sarah and Harry when they returned to the bunker and tortured the other two so the Doctor would provide details of all future Dalek defeats.

By now however, those who opposed Davros were openly rebelling against him. Nyder wanted to use an elite unit to crush them but Davros ordered him to instead surrender and then hold a meeting where the whole elite voted on whether or not to continue with the Dalek project. Davros then had Daleks attack the meeting and exterminate all those who voted against him, although Nyder was briefly taken prisoner by the Doctor and his companions, who forced him to help them destroy the recording of Dalek defeats.

At that point, the Daleks suddenly started the production line to create more of their number without Davros' authorisation and refused his orders to terminate it. Davros told Nyder to turn it off instead, but as he moved to do so, the Daleks exterminated him.

Nyder also appeared in the stage play The Trial of Davros, in which the Time Lords took him out of time to act as a witness.