Queen of the Pure Ones

Conquer all of the owl kingdoms (bothfailed).

Nyra was born in the Northern Kingdoms during a lunar eclipse.

When she was slightly older, she joined the Pure Ones. One night, Nyra and a group of fellow Pure Ones traveled through the forest of Tyto and met a nestling Barn Owl named Kludd (whom Nyra saw potential in) who was fascinated by the group's tales of the parts of forests they had concurred and the small rulers they had driven out or killed. Kludd wished to join the Pure Ones, but it was decided by the Pure Ones' then-leader The High Tyto that Kludd could join once he could fly.

After joining the Pure Ones, Kludd battled and killed the High Tyto and took over as leader. However during the fight, half of Kludd's face of torn off, resulting in him wearing a mask. Some time afterward, Nyra became Kludd's mate.

She is first seen in the fourth book "The Siege", where she aspires for her and Kludd to rule the owl kingdoms together.

During the battle of Ga'Hoole Nyra killed a Guardian named Strix Struma, then received a scar on her face from one of Strix Struma's students Otulissa. In the next book, she is preparing to hatch her and Kludd's egg and also pretends to be Kludd, Soren, and Eglantine's mother Marella, almost succeeding in turning Eglantine to her side. However, Eglantine steals her egg and then smashes it.

In book six "The Burning", Nyra has another egg that is about to hatch. In the end, after Kludd's death, she is seen with their newly hatched chick, naming him Nyroc (later known as Coryn) because he was born on the eclipse.

In the second half of the series, Nyra and the Pure Ones continue to battle the Guardians and later Coryn (after he joins the Guardians' side).

In the fifteenth book "The War Of The Ember, Nyra is fatally wounded after Soren impales her with an ice splinter. She then plummets into a volcano and is engulfed by lava. 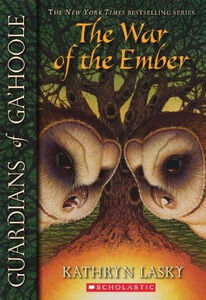 Nyra and her son Coryn on the cover of The War of the Ember book
Community content is available under CC-BY-SA unless otherwise noted.
Advertisement