Seek more powerful adversaries and punish Nyx just for the heck of it. (Funikura)

From Zero to Nightmare

Nyx is a peasant girl born to a laborer in the service of Count Vance. When Nyx stumbled upon Funikura, an evil sentient staff, she was granted impressive magical powers. She then entered the Queen's Blade tournament to prove her worth to those who have looked down on her through her whole life, as well as seek revenge against Elina, her former tormentor.

Funikura is Nyx's weapon, and is a living staff. She stumbled upon it, which it then began to control her.

Nyx has waist length brown hair that spikes down, with an ahoge on the top of her head. She has green eyes. wears a red dress with 3 or 4 tails, and a flame design on the bottom. There are long, dark feather-like attachments on the shoulders. Underneath, she wears a purple bustier, with a red heart on the garterbelts. She wears purple elbow gloves, and red heels as well.

Funikura appears as a staff, with long tentacles and a bright red eye.

It seems that Nyx is bipolar, from the way that people see her and how she was treated when she was younger. Nyx has a split-personality which shows her wicked side. Her true self is a weak caring little girl but, if she shows any sign of weakness, Funikura punishes her (in very lewd ways), giving her power to unleash a much darker and stronger Nyx. This evil version of Nyx seems to be her letting loose the anger she had pent up over the years.

Funikura is not very loyal, not staying with its owner for long, as it always seeks stronger opponents, although with each owner it will attempt to control them, and force them to do its bidding.

Nyx is a wandering magician that manipulates flames at will. She has a strong sense of justice, but she's dangerous because she can't really control her skills and emotions. It's not unusual for her to want to only burn down the house of some evildoers, but ending up burning the whole village to ashes.

Daughter of a low caste worker from the Count Vance's castle, from her birth she was raised with constant abuse from the people around her. As a result, she became shy and talentless, while deeply hating the irrationality and the evilness of the world.

Unexpectedly, one day she got a mysterious wand that changed her life. With the infinite power received from her wand, the forbidden treasure Funikura, Nyx decided to hunt down the evil people. So as to not be underestimated by the evildoers, she wore an exuberant dress and learned to use rude words she wasn't used to.

The treasure Funikura has a will of its own and it's an evil being that desires to control its host with violence and "sweet honey". When Nyx fails at a spell, or when Funikura wants her to improve, or for no reason whatsoever, Funikura punishes Nyx without mercy. Ultimately, Nyx is a simple plebeian with a weak mind. Aware of her mediocrity before Funikura and fearing to lose the immense power she now has in her hands, Nyx keeps on fighting.

Until the day when she's crowned queen and she can look down triumphantly on all those who despised her.

Nyx is not adapted to close-range fighting and prefers to rely on long and mid-range. She uses Funikura as a magical staff in battle as she is a pyromancer, scorching the battlefield in flames (Though in truth it is Funikura doing all the fighting and she is merely an instrument to his will).

While not powerful by itself, it can imbue its user with extraordinary magical powers, it also seems to augment the user's previous skills as well. It has been stated that the liquid released by Funikura has the ability to heal wounds and is able to augment the appearance of its host, such is the case with Nyx. 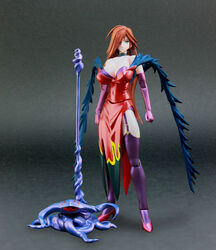 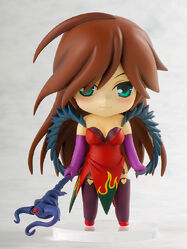 Retrieved from "https://villains.fandom.com/wiki/Nyx_%26_Funikura?oldid=3571993"
Community content is available under CC-BY-SA unless otherwise noted.