Supreme head of the Tokyo Yakuza

Former member of the DeVAS

Enjoying the Tokyo nightlife with the Crazy 88.

She is a member of the Deadly Viper Assassination Squad (DeVAS) and the supreme leader of the Tokyo Yakuza and one of the main enemies of the Bride.

She was portrayed by Lucy Liu in her first and, thus far, only villainous role.

She lived a relatively normal life but when O-Ren was just nine years old, she witnessed both her parents being brutally murdered on the orders of a deadly Yakuza leader known as Boss Matsumoto while young O-Ren lay under the bed, seeing everything unfold before her very eyes.

Her father who was in the Army managed to fight off against two of Matsumoto's men with O-Ren's father killing both of them before he was eventually killed after getting impaled with a sword into his back. A few minutes later, O-Ren's civilian mother was later personally executed by Matsumoto who used the same sword to pierce her chest and heart with the scene shocking young O-Ren and soon causing O-Ren to become drenched with blood from her mother's fatal wound when the red liquid soaked the bed.

A while later, Matsumoto and his men left the place—but not before the same associate who'd killed O-Ren's father responded by using some alcohol and Matsumoto's cigar to create a massive fire that ended up destroying the house and burning all the bodies beyond recognition.

O-Ren escaped the fire but was left permanently psychologically and emotionally damaged by the horrors she had witnessed at such a young age, and as she watched her childhood home burn to the ground, she swore revenge against Matsumoto.

For the next few months, fueled by nothing but revenge, O-Ren became a student under Hanzo Hattori, a famous swordmaker and swordsman and underwent intense training, even going so far as to presumably learn how much strain the human body could take when pierced by a single sword.

Knowing that Matsumoto was a pedophile, she crept into his penthouse and then used her training to inflict maximum pain on Matsumoto's body while asking him to look at her and she then wondered if Matsumoto remembered if she looked like someone he'd killed, obviously referencing her parents, who Matsumoto and his men had massacred.

O-Ren then removed the sword and was drenched with Matsumoto's blood, a possible sign that she had avenged her parents. She then spotted two bodyguards who had come to investigative, having heard their boss scream.

The two bodyguards then attempted to kill O-Ren by firing their guns at her, only to discover too late that O-Ren was actually hiding under the bed, having used Matsumoto's remains as a shield.

When the bodyguards were temporarily stunned, O-Ren, now wielding a gun fired off two successive shots, costing the first man his leg before her second shot decapitated him on sight. His colleague later died seconds, having suffered the same fate and after that, O-Ren escaped.

Nine years later and at the age of twenty, O-Ren had managed to become one of the top female assassins in the world and was later seen standing on a rooftop, wielding a sniper rifle which she used to kill a presumably corrupt government official, much to the horror of the two women accompanying him.

O-Ren's expertise in sword fighting and espionage tactics which led her to eventually became part of the Deadly Viper Assassination Squad where she was code-named Cottonmouth. She worked for the squad for five years, and then she left the squad after torturing the Bride, a fellow Viper Squad member during her wedding ceremony along with the rest of the squad members.

Four years later, when she was twenty-nine years old, she became the head of the Tokyo Yakuza with the help of Bill, who was her leader in the Deadly Viper Squad, and was known as the Queen of Underworld Tokyo. She even has her own bodyguard army known as the Crazy 88 led by Johnny Mo, and her own personal bodyguard, Gogo Yubari.

While visiting the club called "The House of Blue Leaves", she was pursued by the Bride since she was part of the Bride's assassination list. During her encounter with the Bride, she had Gogo and the Crazy 88 fight against the Bride while she makes her quiet escape. However, the Bride managed to kill nearly all of O-Ren's bodyguards and finally caught up with her.

Outside the club, O-Ren and the Bride engaged in combat with their swords in the snow. As the fight resumes, O-Ren injured and mocked the Bride by referring to her as a foolish white girl who likes to play with Samurai swords, which leads O-Ren to receive a wound from the Bride.

She apologizes for her earlier insult, and the Bride forgave her. The two then continued to fought up the Bride eventually defeats O-Ren by scalping off her head, revealing the top of her brain cut off. In her last, dying breath, O-Ren was able to recognize the Bride's sword as a Hanzo Hattori blade after being close enough to actually see the symbol and for feeling the sharpness of the blade.

Presumably, as a child, O-Ren was happy and carefree, living an ideal life. However, after witnessing the deaths of her parents at the age of nine, she became a closed-off, emotionless being, sacrificing her very childhood and innocence to avenge her dead parents.

As she grew older, O-Ren still retained the original ruthlessness and cold-blooded that she had developed as a child.

For being born an American, O-Ren was very skillful in speaking English as well as Japanese, her native language. She was extremely proud of her heritage and will not hesitate to kill anyone especially her own subordinates who dared to insult her family heritage because she loved her parents very much and would not tolerate being spoken to in an ill mattered way. Despite this, she was calm and level headed most of the time.

She even encouraged her subordinates to speak their minds about her plans if they are not too convinced, as long as it is in a respectful matter and does not have anything to do with her background. For being a female, she was an expert in business leadership. She did show some concern for her close subordinates. This was shown when she saw her best friend and Second-in-Command Sofie Fatale, who had her left arm cut off from the Bride with her sword. 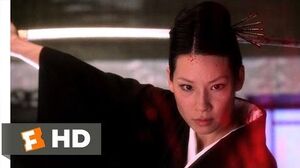 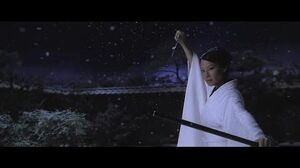