To bully all Knockouts in TNA (villain side; formerly)

ODB is a female professional wrestler best known for competing in TNA, where she held the Knockouts Championship four times, and was one half of the final ever Knockouts Tag Team Champions with Eric Young.

She was portrayed by Jessica Nora Kresa.

ODB debuted for TNA in 2007 as part of the company building the Knockouts Division. In her first appearances, ODB originally portrayed a villainess, with one instant coming when she used her flask as a weapon to defeat Gail Kim. However, due to the fans' positive response to her comical persona, she quickly became a babyface, and later added two reigns as Knockouts Champion.

After two years as a babyface, ODB turned into a villainess and attacked Tara during an "ODB's Angle" segment, beginning a feud between the two. ODB lost her Knockouts Championship to Tara at Final Resolution, but she would win a #1 Contender's tournament on New Year's Eve. Four days later, ODB regained the Knockouts Championship from Tara, but she lost it back to Tara at Genesis. ODB left TNA in June 2010.

ODB returned to TNA twice in 2011, with her second return seeing ODB regain her villainous persona. On the May 19 edition of Impact Wrestling, the evil ODB attacked Velvet Sky after she won a handicap match against Katarina Waters, Winter and Angelina Love, and explained her actions a week later by claiming that Velvet was the reason that ODB got fired. ODB was defeated by Velvet in a grudge match on June 9, but she would continue to plague Velvet in the following weeks. During her feud, ODB received help from returning Knockout Jacqueline, with the pair attacking Velvet in a backstage segment on June 16. ODB and Jacqueline defeated Velvet Sky and Brooke Tessmacher on June 23, but the duo would lose to Velvet in a handicap match two weeks later. As part of the match's stipulation, ODB and Jacqueline were banned from TNA, but they both returned a week later and attacked Velvet again. The duo later tried to get contracts from TNA by abandoning their villainous ways, which was successful for them. However, ODB continued competing as a villainess until she was paired up with Eric Young in 2012.

ODB was mostly portrayed as a brutish, trash-talking villainess during her time in TNA, though in her feud with Velvet Sky, she was clearly portrayed as vengeful as well. 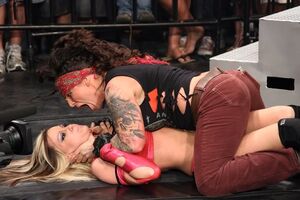 Add a photo to this gallery
Retrieved from "https://villains.fandom.com/wiki/ODB?oldid=3543847"
Community content is available under CC-BY-SA unless otherwise noted.