Organization for General Revenge and Enslavement

Stealing WMDs and willingness to use them

Retrieve a cache of nuclear missiles.

Organization for General Revenge and Enslavement is a criminal organization and are enemies of Aquaman. They are also known as "OGRE" and are well known at stealing weapons of mass destruction. Led by a mysterious leader known only as the Supreme One, O.G.R.E. attempted to steal and sell off a supply of atomic rockets. Aquaman and Mera, cooperating with the United States government fought up against O.G.R.E. and shut down their operations. O.G.R.E. employed two assassins named Typhoon and Huntress who ultimately betrayed the cartel and collaborated with Aquaman.

O.G.R.E. later conned California millionaire Eliot Harlanson into purchasing an atomic bomb, which they intended on using to destroy Atlantis. The Federal Bureau of Investigation set up a sting operation to bring O.G.R.E. down. Agent 03, Honey James, pretended to be Harlanson's girlfriend and secretly brokered the sale of a "dud" a-bomb. As the bombing of Atlantis was alerted, the feds moved in and apprehended the remaining members of the O.G.R.E. organization. 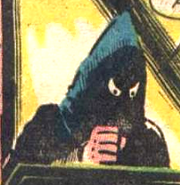 Retrieved from "https://villains.fandom.com/wiki/OGRE?oldid=3292615"
Community content is available under CC-BY-SA unless otherwise noted.