NOTE: This article is about the incarnation of Obadiah Stane from the Marvel Cinematic film series. The mainstream version can be found here: Obadiah Stane (Marvel).

Associate of the Ten Rings
Terrorist

Take over Stark Industries.
Steal Stark's Iron Man technology and sell it to the Ten Rings and many others worldwide (all failed).

Obadiah Stane, also known as Iron Monger (sometimes known as Metal Monger) is a recurring antagonist in the Marvel Cinematic Universe, serving as the main antagonist of the 2008 film Iron Man and a flashback antagonist in the 2019 film Spider-Man: Far From Home.

He was the co-leader of Stark Industries, Howard Stark's business partner and Tony Stark/Iron Man's personal mentor and business partner whose revealed to be the one who orchestrated Tony Stark's kidnapping by The Ten Rings which they are associated with him as well as he is the arch-nemesis of Stark as he built an armor of his own; Iron Monger in order to destroy Stark and to control the company.

He was portrayed by Jeff Bridges, who also portrayed CLU 2 in TRON: Legacy.

Stane was a businessman who headed Stark Industries after the death of Tony's father Howard and became the firm's second-in-command when the younger Tony came of age. However, Stane grew jealous of Tony, even the latter became a much more competent businessman in person. To that end, Stane hired the terrorist group (known as the Ten Rings, led by Raza) to kill Tony. However, upon discovering who Tony really was, Raza and his men decided to kidnap him instead and hold him for ransom, intending to get him to create a Jericho missile. However, Tony used his expertise to build himself an armor, dubbing himself "Iron Man". With this new armor, Tony was able to defeat several of the Ten Rings men before returning back to business.

At first, Stane felt excited to see that Tony is alive and well, but soon learns about the new armor that Tony made to escape. To that end, he confronted Raza before stealing the prototype armor and having Raza and his men killed to cover his tracks. He then gets several scientists (led by William Ginter Riva) to build a new armor (known as the Iron Monger) and steals Tony's Arc Reactor by using a Sonic Taser to paralyze, admitting his true colors.

Eventually, Pepper Potts soon learned about the Stane's crimes and exposed them in the computer system before bringing in several S.H.I.E.L.D. agents to arrest them. Anticipating this, Stane dons his Iron Monger suit to kill them all. Just before Stane is about to kill Pepper, Tony (having been saved by two robots with his first Arc Reactor) shows up with his Iron Man armor to fight back and finish off Stane for good.

The two then engaged in a huge final battle over the Stark Industries Building and both combatants displayed the fullest extents and limitations of their suits' capabilities and weaponry, and destroyed vast amounts of public property across the city. In the novelization, Stane becomes aware that the Arc reactor is about to explode, but is willing to the let it do so anyways, which would result in the deaths of thousands of innocent people-and attempts to kill Tony and Pepper for intervening. Stane easily overpowered Tony in every way, but Tony orders Pepper to activate the building's prototype large-scale Arc Reactor located at the complex underneath them. As a result, Stane is electrocuted to his death, and his armor and body fell into the reactor, resulting a massive explosion.

Stane was only seen in a flashback as Giva recalls his backstory of his allegiance with Stane that got him fired, remembering when Stane called out him for being unable to replicate Stark's Arc Reactor. It was also told that Giva (along with other former Stark Industries employees) joined Mysterio to stage many terrorist attacks (via the Elementals) so that Mysterio can 'foil' them and usurp Tony as the world's greatest hero.

To the public, Obadiah Stane was forced to step down, and he and Tony still remained close friends though. Stane even gave an affectionate speech and covered for Tony by claiming that he was working too hard, when, in reality, he was gambling. However given his true nature, it is likely that he only covered for Tony, so people wouldn't suspect him or so he could keep the award for himself.

Just near the end of the film was when Stane's true personality was revealed: he was was willing to do whatever it took to get back to the top even if it meant killing his former friend and anyone who would dare to get in his way-going so far as to try and crush Tony with a car filled with a woman and her four children. He was also willing to kill Pepper to cover his tracks.

In addition to his greedy and ruthless nature, Stane is also rather reckless and arrogant. While he did manage to improve the first Iron Man suit, he never learned to properly train himself on how to use it before fighting Tony. This is best shown when he was about to kill Tony, but couldn't because of his poor aim.

Stane accepting an award in Tony Stark's place at an award ceremony.

Stane unimpressed when Tony claimed that he no longer wished to make weapons.

Stane having a photograph taken with Tony.

Stane incapacitating one of The Ten Rings Terrorists that he ordered to kidnap Tony.

Stane showing Tony his true nature and leaving him to die after he removed his Arc Reactor and showed his evil grin.

Stane attempting to kill Tony on the roof of Stark Industries.

Stane electrocuted as the Arc Reactor was overloaded.

Stane killed in an explosion after tumbling into the Arc Reactor. 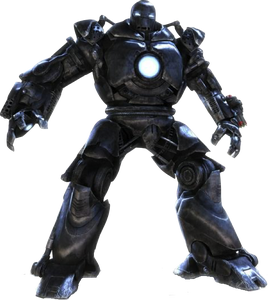 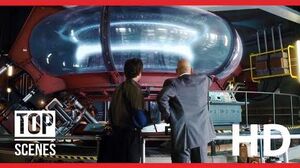 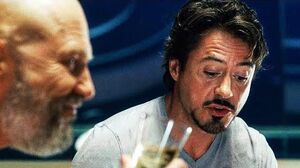 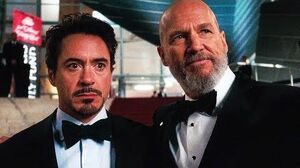 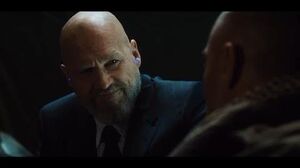 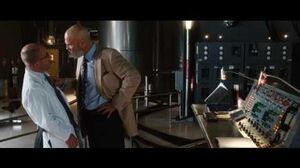 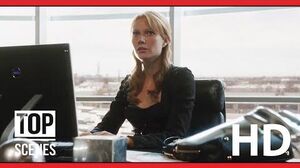 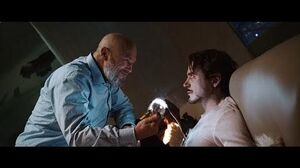 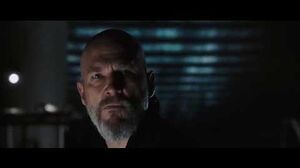 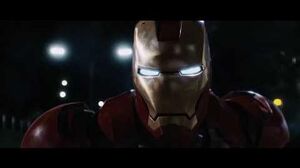 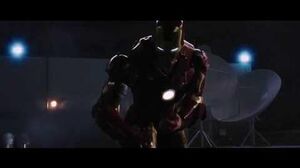 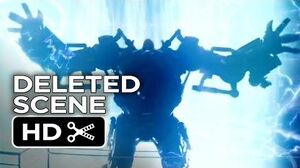