Obesandjo is a major antagonist in the 2009 science fiction action film District 9.

He was portrayed by Eugene Wanangwa Khumbanyiwa.

Obesandjo is the head of a Nigerian gang and a powerful figure in the underground world of Johannesburg, South Africa. He and his gang are trying to extract weaponry used by the Prawns of District 9, despite not being able to use them. Discovering the Prawns' love for cat food, Obesandjo conducts an illegal business by selling cat food to the Prawns in exchange for their money and weaponry, not to mention "interspecies prostitution", where he offers human prostitutes to the Prawns. However, when their backs are turned, Obesandjo has the Prawns killed and butchered under his belief that eating their flesh will allow him to gain their powers.

After Wikus becomes infected with a fluid that is slowly mutating him into a Prawn, he and the Prawn Christopher Johnson plan a siege to the MNU headquarters to retrieve the fluid, as it was needed to fuel a dropship that could take Christopher and his son CJ to the mothership. Wikus heads to the gang's hideout and offers Obesandjo money in exchange for weapons. Knowing of his mutation, Obesandjo cuts some of the skin off of Wikus' Prawn arm and tastes it. He offers to give Wikus weapons if he surrenders his arm. Wikus resists, prompting the gang to hold him down so they can cut the arm off. Wikus reaches for an alien gun and blasts several gangsters with bursts of air, threatening to shoot them if they come any closer. Obesandjo demands Wikus to tell him how he got his power, but Wikus ignores him and flees with a collection of weapons. Obesandjo angrily threatens Wikus that he is coming for him.

Following Wikus' attack on the MNU headquarters to obtain the fluid (which is a battery to the dropship), Obesandjo watches the helicopter live reporting of the incident, ordering his men to make their move once a missile blasts one of the dropship's engines and it crashes to the ground. When Koobus Venter and the PMC confiscate Wikus and Christopher Johnson, the gangsters suddenly ram their cars into the PMC trucks. The gangsters distract the PMC squad while the others drag Wikus out from the wreckage and drag him to their base against his will.

At the base, Obesandjo sadistically reminds Wikus that he would catch him, while boasting about his intentions of becoming stronger by eating his arm. Meanwhile, Christopher's son CJ, having hidden in the dropship, remotely activates a large mechanized battle suit previously sold to Obesandjo earlier in the film. Before the gangsters could mutilate Wikus, the suit effortlessly defeats the gangsters by catching all of their bullets into a ball before flinging them back at them. Before Obesandjo could react, the suit fires a cylinder-shaped mine straight into his head, which then explodes.

Obesandjo is a cruel and sadistic gangster obsessed with power. He negotiates with the Prawns of their weapons in exchange of cat food before killing them and eating their flesh, believing that it will allow him to use their weapons so he can become unstoppable. When confronted by Wikus, Obesandjo becomes determined to kill Wikus and eat his mutated arm. 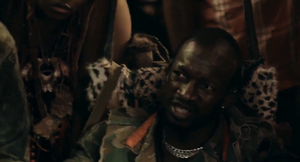 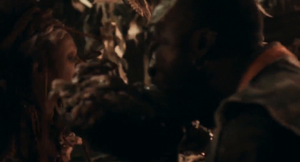 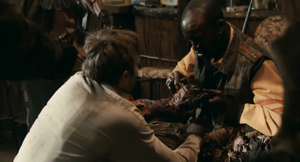 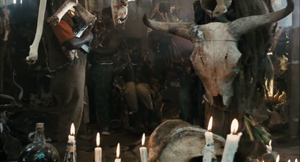 Obesandjo and his goons watching the dropship footage. 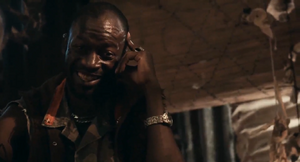 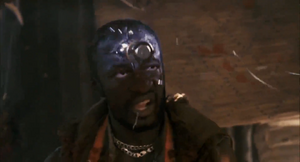