Aid Megatron to become the legitimate ruler of Cybertron.

Obsidian and Strika are two of main antagonists in the second season of Beast Machines.

Obsidian and his consort Strika have fought for Cybertron in countless battles and won them all. Their military brilliance have been bane to Predacon forces during Maximal-Predacon Civil War (occurred long after Great War between Autobots and Decepticons).

Now, with Megatron in complete control of Cybertron who is also aware of their military geniuses, they had their loyalties to Cybertron corrupted and rebuilt as loyal commanders of Vehicons, they now unleash their firepower and military geniuses on the handful of surviving techno-organic Maximals who struggle against Megatron.

Obsidian and his consort Strika were the greatest generals in Cybertronian history, and two of Megatron's Vehicon generals in the second season of Beast Machines. When Megatron escaped his captivity from Maximals (at the end of Beast Wars).

He got to Cybertron first before Maximals (due to time warp) and unleashed techno-virus on Cybertron, decimating the nearly entire Cybertron populace, saving their sparks. Obsidian and Strika are among the infected victims.

Remembered as a masterful strategist and tactician during a war with the Predacons sometimes after The Great War and tired of the Maximals keeps defeating his Vehicon forces plus getting fed up with Thrust's inability to handle them, Megatron selected Sparks of Obsidian and Strika to be his new generals to defeat the technorganics.

Though he briefly played the part of a brain-washed machine similar to Tankor, his true intelligence was revealed when victory seemed inevitable, though the Maximals escaped shortly after. After participating in several battles he and Strika were launched into Cybertron's orbit shortly before the reformatting of Cybertron.

In a cut scene, he and Strika would have returned to Cybertron but refused reformatting as punishment for their transgressions.

Strika is one of the greatest generals in Cybertron's history, and the consort of Obsidian. They both became two of Megatron's Vehicon generals in the second season of the animated TV series Beast Machines, from the Transformers franchise. She commands Vehicon army of Armored Vehicle drones, taking the place of Tankor as commander of heavy artillery.

When Megatron escaped his captivity from Maximals (at the end of Beast Wars) he got to Cybertron first before Maximals (due to time warp) and unleashed techno-virus on Cybertron, decimating the nearly entire Cybertron populace, saving their sparks.

Obsidian and Strika are among the infected victims. She had her spark removed by Megatron, only to later have it replaced within a Vehicon body. Like her cohort Obsidian, Strika wasn't given an alternate personality, as the previous Vehicon generals had.

As a strategist during the war with the Predacons, Strika shared an existence parallel to that of Obsidian, as his partner and consort. It is important to realize that they believed they were serving Cybertron as Megatron had reprogrammed them to think he and the planet were one and the same. During Megatron's absence and presumed demise, during the second season, the two Generals operated much like Maximals, even forging an alliance with them, although with the return of Megatron that alliance did not last very long. 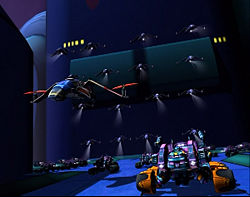 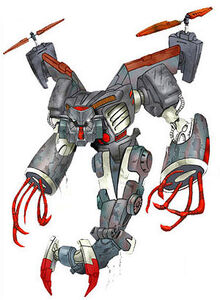 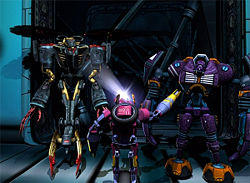 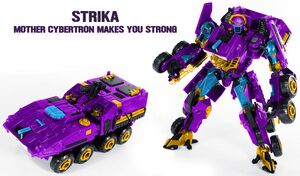 Retrieved from "https://villains.fandom.com/wiki/Obsidian_and_Strika?oldid=3248058"
Community content is available under CC-BY-SA unless otherwise noted.