Trying to kill his brother.

Kill his brother Aquaman and the Justice League (failed).

In the Flashpoint timeline, Orm Marius, also known as Ocean Master, is part of Aquaman's loyal and elite enforcers. When the Ravager got too close to the European coast, the Atlanteans attacked the Ravager and Deathstroke's crew. Ocean Master used his trident to detonate Clayface. After he mistakenly mentioned the late Queen Mera's name, Ocean Master was struck in the face by Aquaman who reminded him never to speak her name. Ocean Master monitored Hal Jordan's failed attempt to kamikaze into the doomsday weapon. Aquaman then ordered Ocean Master to prepare for the invasion of New Themyscira. During the invasion, after Black Manta was killed, Ocean Master opened fire on Batman but was nailed by the Flash. At some point, Ocean Master was killed by Amazonian archers during the battle.

Orm Marius was first seen in the post-credits scene on an Atlantean ship, holding the dead body of his king and vows revenge on the surface world, believing that the surface dwellers on Earth are responsible, calling it an act of war from the surface, for which he mistakenly believes to have been an unprovoked attack — in reality, it was caused by Darkseid's invasion.

Orm and his team of Atlanteans soldiers attacked and killed the crew of a submarine, Orm and Black Manta meet with Queen Atlanna (Orm's mother) to convince her to declare war on the surface world for the destruction caused by Darkseid's attack. After she rejects their proposition, Orm tells Black Manta to use missiles (that his men stole from a nuclear submarine earlier) loaded into his submarine to attack Atlantis, framing the surface world.

Orm and Black Manta then demand that the Queen launch a war for the alleged act of terrorism from the surface. However, Queen Atlanta still refuses to strike and tells Manta to arrange a meeting with the Justice League to discuss a peace treaty. After his men fail to kill his half brother, Aquaman, Orm kills Queen Atlanta and usurps the throne of Atlantis, once again framing the humans for killing his mother. As King, Orm dons his armor and becomes the supervillain "Ocean Master".

As Ocean Master was about to kill Aquaman, Cyborg broadcast a recording of Ocean Master confessing to murdering his own mother. After hearing the truth, the Atlanteans cease their attack. Ocean Master tries to explain his actions as Aquaman knocks Ocean Master out and becomes the new King of Atlantis. In the post-credits scene, Ocean Master is imprisoned in Belle Reve Prison. As Orm demands to speak to Aquaman, Lex Luthor appears and states that he has a proposition for him. 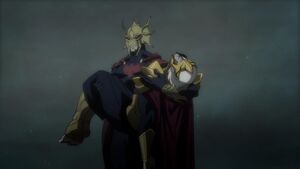 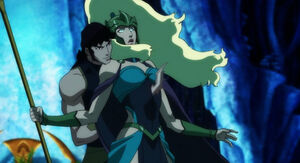 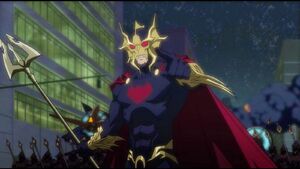 Ocean Master leading an attack on the city. 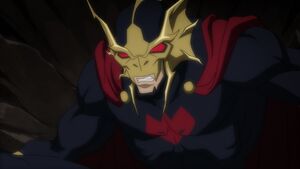