NOTE: This article is about the incarnation of Ocean Master from the DC Extended Universe film series. The mainstream version can be found here: Ocean Master.

Member of the Atlantean Royal Family

Unite the Kingdoms of Atlantis (failed).

Orm Marius, also known as the Ocean Master, is the main antagonist of the 2018 epic superhero film Aquaman. He is Aquaman's younger Atlantean half-brother and the former ruler of Atlantis, who seeks to unite the Kingdoms of Atlantis in order to declare war on the surface world, out of the belief that humanity has polluted the seas.

He was portrayed by Patrick Wilson, who also played Agent Lynch in The A-Team.

Orm Marius was born in the kingdom of Atlantis at least a few years after his older half-brother Arthur Curry, also known as Aquaman, to King Orvax Marius and Queen Atlanna. Guided by Nuidis Vulko to be a magnificent warrior, Orm has never known defeat when he grew up but became known more and more to the surface world and the human race as well as the great damages they cause to the Seven Seas and Atlantis by polluting the water, the air and the land with factories and trash. At some point during Orm's childhood, Orvax learned that Atlanna bore a half-human son sometime before having Orm and sacrificed her to the Trench.

It is unknown if Orm became King after the death of his mother or father since the latter seems to have been a consort rather than a regnant. Sometime after becoming King, Orm plotted to wage a war against the surface dwellers, causing him to become a powerful tyrant as well as to devise a wide master plan to destroy the surface and the humanity as one by uniting all the seven kingdoms in the Seven Seas into a grand war.

In order to carry out his plan and become "Ocean Master", first he must obtain the support of at least four kingdoms. He also employed David Kane, Jesse Kane, and a group of high-sea hijackers to steal a Russian Nuclear Submarine which David Kane used as a seemingly unprovoked attack by surface dwellers, while Orm was meeting with Nereus, the mighty king of Xebel, and his men. Nereus begins to show support toward Orm, after some of his men had died, and is ready to join forces with him despite the anger of his daughter, Mera, who has been betrothed to Orm, refuses to aide them and journeys to the surface to ask Arthur for help, earning his trust by saving his father Thomas from a tidal wave sent by Orm as a warning.

Orm then sends commando guards to David Kane with a holographic message from Orm himself, paying David for his services. Orm would later send Murk and his Men-of-War soldiers to capture and bring Aquaman to him. Orm would arrive to visit Aquaman who was chained up and announces that Atlanna was executed for the crime of having a half-breed son, blaming Arthur and the surface for her death. He offers him an opportunity to leave forever but instead challenges him to a duel in a ring of underwater lava for the throne of Atlantis. In the Duel, Orm gains the upper hand when he breaks his trident and nearly kills Arthur before Mera rescues him. He then attempts to chase them down, but they get away thinking that they drowned in lava.

Using a tracker Orm put on Mera, Murk is able to track them down and Orm sends out a search for her and Aquaman, while Nereus threatens to end their alliance if Mera is killed instead of captured, which Orm gives his word. Meanwhile, Orm provides David with Atlantean armor, weaponry, and Men-of-War commandos in order to kill them, giving David the name "Black Manta."

During meeting with King Ricou, Queen Rina, and Princess Scales of the Kingdom of the Fisherman, Orm tries to convince them to join their alliance in uniting the Kingdoms and declaring war on the surface world. Ricou, however, rebukes his proposal for an alliance by stating when they finally make contact with the surface, they should educate them, not destroy them. This goes poorly with Orm who provokes him into attacking and kills him, threatening his heir, Scales, into cooperating. Orm also imprisons Vulko upon learning of his betrayal.

Orm and his allies then begin to lead an army against the crustacean forces of the Kingdom of the Brine with the intent of completing Orm's surface battle preparations by coercing the remaining four kingdoms of Atlantis to pledge allegiance to him and his campaign against the surface, titling himself as "Ocean Master". Just as he is about to kill the Brine King for resisting, Aquaman, Mera, and Atlanna, with the assistance of Karathen, intervene and lead an army of marine creatures, including the Trench, in the battle against Ocean Master and his allies, who renounce their obedience to Ocean Master and embrace Aquaman as the true king upon learning he wields the trident. Aquaman then fights against Ocean Master and defeats him, destroying his trident. Ocean Master then orders Aquaman to kill him as mercy is not part of Atlantean philosophy. However, Aquaman tells Ocean Master that he is not full-blooded Atlantean and chooses to spare his life. Ocean Master then discovers Aquaman has found and rescued their mother. After Atlanna tells Ocean Master that she loves them both equally as her sons, Orm accepts his fate, renounces his title, and is taken prisoner by Atlantean guards. Aquaman then tells him whenever he is ready, they can have a talk. Orm gives a last glance at his brother before returning to the ocean. It is unknown what will happen to him later on. 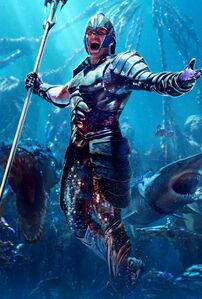 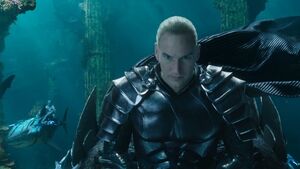 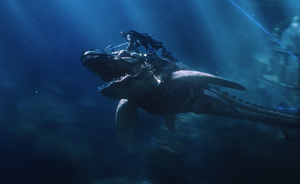 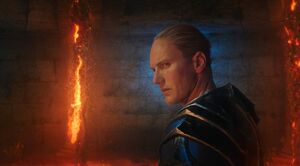 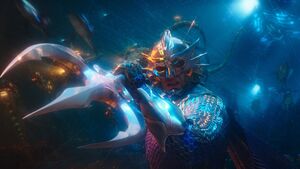 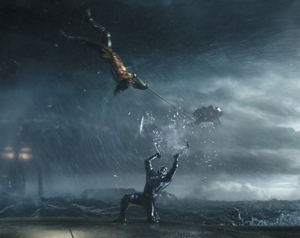 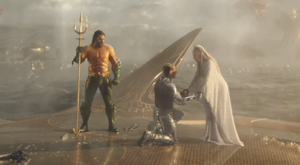 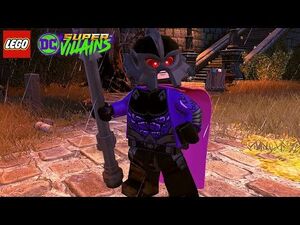 Retrieved from "https://villains.fandom.com/wiki/Ocean_Master_(DC_Extended_Universe)?oldid=3392051"
Community content is available under CC-BY-SA unless otherwise noted.