Liu Xing Long, or Oceanus Shenron (Funimation dub), is one of the Shadow Dragons in Dragon Ball GT and the dragon of the Six-Star Ball. She is the only female Evil Dragon. She is the third Shadow Dragon to fight Goku.

In Princess form, she was voiced by Masako Katsuki in the Japanese version, and by Laura Bailey in the Funimation dub and Lana McLellan in the Blue Water dub in the English version.

In Dragon form, she was voiced by Ryūzaburō Ōtomo in the Japanese version, and by Steve Sanders in the Funimation dub and Zane Sampson in the Blue Water dub in the English version.

Son Goku and Pan encountered Liu when she was pretending to be "Princess Oto", a sea princess in a local village that gave them fish. However, this was putting many fisherman out of business. Goku, Pan, and a boy from the village named Bisshu confronted Liu on the beach. Goku demanded to know what wish had created her and finally, Liu told them, though much to her deep embarrassment and her face turned bright red, as did Pan's, though Goku found this memory funny. Liu then fought Goku and managed to thrash the Saiyan around with her wind powers.

However, Goku figured out that the dragoness was hiding her true form and she briefly revealed her true form. They resumed their battle and Liu managed to trap Goku inside a cliff with a powerful wind stream. Luckily, with some help from Bisshu's seagull, Pan was able to figure out that the center of Liu's wind storm was open. She unleashed a Kamehameha wave and Goku followed suit, destroying Liu.

Like most of the other Evil Dragons, Liu Xing Long has the ability to control elements, though unlike the others, she can control two, water and wind, though she uses wind more than she does water. She also has minor abilities in shapeshifting, since she can change from her ugly, monstrous, and objectionable form into the form of a beautiful girl. 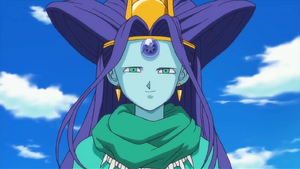 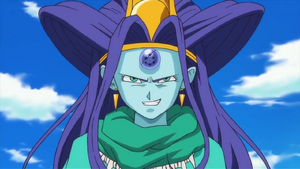 Oceanus Evil Grin
Add a photo to this gallery

Retrieved from "https://villains.fandom.com/wiki/Oceanus_Shenron?oldid=4221342"
Community content is available under CC-BY-SA unless otherwise noted.