Legend of the Sea

Plot to take over the Eastern Sea

Get revenge on the Dragon King (succeeded).

Take over the Eastern Sea (failed).

Ocho is a three-legged octopus who is the main antagonist in the movie Legend of the Sea. She is always accompanied by Hermin, a crab wearing a toothy skull.

In the past, she desired power over all living creatures of the sea, which soon resulted in a battle against the Dragon King who sought to protect the Eastern Sea from Ocho's evil ambitions. After the battle, Ocho paid the price and lost five of her legs. She was banished from the Eastern Sea but wasn't fully defeated.

Years later, Ocho plans to take over the throne of the kingdom and also seek revenge by claiming the Dragon Pearl for herself to rule over to the Eastern Sea, with peace and justice vanishing from the seas as a result. Her plan was uncovered by Draco, the young son of the now elderly Dragon King. After seeing him spying on her, Ocho captured the young prince and held him for ransom. She and her minions confronted the Dragon King in his palace, demanding that she would have her "rightful" coronation with the Dragon King himself crowning her as ruler of the Eastern Sea in exchange for Draco's release. The octopus retreats back to her lair, where she and her minions plan an additional assassination attack on the Dragon King.

Draco, powered by the Dragon Pearl, transformed into a full-grown Dragon King and used his newfound power to once again banish Ocho from the Eastern Sea, sending her away and ending the war. Elsewhere, the three-armed octopus swears vengeance, but she is soon presumably devoured by a pack of predatory stonefish. 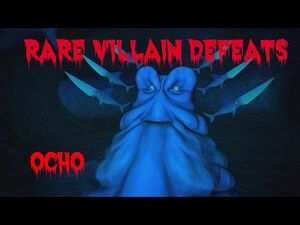 Rare Villain Defeats- Ocho
Add a photo to this gallery

Retrieved from "https://villains.fandom.com/wiki/Ocho_(Legend_of_the_Sea)?oldid=4211688"
Community content is available under CC-BY-SA unless otherwise noted.