Villains Wiki
Register
Don't have an account?
Sign In
Advertisement
in: The Amazing World of Gumball Villains, Redeemed, On & Off,
and 30 more

Hanging out With Tobias and Banana Joe

Post a embarrassing video of Gumball's school record as revenge for not joining The Rejects Club (The Club).

Kill Gumball and Darwin (The Phone).Get Gumball to sacrifice Darwin in order to become best friends (The Uncle, all failed).

Redeemed Rival
Harry "Ocho" Tootmorsel is an 8-bit video game spider and a recurring antagonist in The Amazing World of Gumball.

He was voiced by Max Cazier.

While often a background character, he has been antagonistic at some points. He was a major antagonist in "The Club", along with Bobert, as part of The Reject Club. He and the other club members planned to embarass Gumball for refusing to join them.

He was the (former) main antagonist of the episode "The Phone", where Gumball yells at him on Darwin's phone, causing him to attack Gumball and Darwin with his webs. He destroys their house, but he was stopped by his mother.

He was also the (former) main antagonist in the episode "The Uncle", when Gumball wanted to be best friends with him only to meet Ocho's uncle Mario. Gumball eventually isn't the person he has in mind, he sing a song of how he doesn't want to be friends with Ocho. He tells Gumball he has another uncle who is famous "The Blue Hedgehog that can run fast". 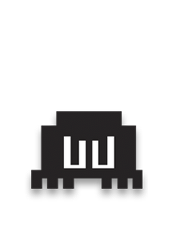 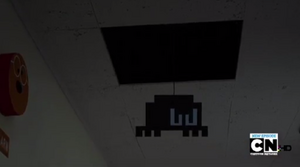 Ocho emerging through a vent. 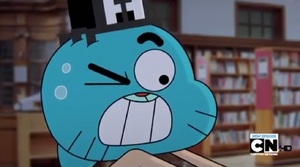 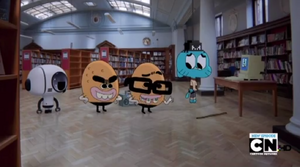 Ocho with the rejects. 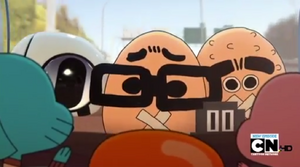 Ocho's defeat in "The Club". 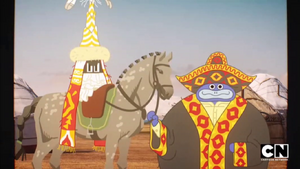 Ocho killing Darwin in "The Club" 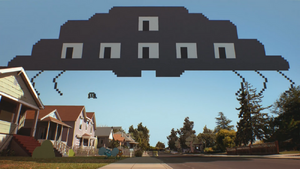