Kill the Borrowers and demolish the Lenders' house to build his very own condominiums and later make his own town of Pottersville (failed).

Ocious P. Potter is the main antagonist of the 1997 film adaptation of The Borrowers. He is an arrogant, greedy and evil real estate lawyer who wants to destroy the Lender family's house and build luxury apartments in its place.

He was portrayed by John Goodman, who also played Big Dan Teague from O Brother Where Art Thou, Chuck Long from Evan Almighty, Bones Darley from Death Sentence, Marshall from The Hangover, Howard Stambler from 10 Cloverfield Lane, and Layton T. Montgomery from Bee Movie.

Ocious P. Potter is best discribed as greedy, pompous and deceitful. He wants to build apartments on the Lender's property and doesn't care if the Lenders suffer from it. When he discovers the secret home of the Borrowers, he is determined to get rid of them by all means necessary.  He is also very conniving as he was able to locate the will inside the walls of the Lender house.

Potter is definitely not a pateint man, which is proven several points during the film. Such as when he demands the demolition to be scheduled immediately, regardless of short notices or anything else on their schedule. He also abuses Exterminator Jeff for his short attention span and insults police officer Steady to get him to leave him alone. Potter's rudeness does prove to bite him when he demands the town hall receptionist to direct him to demolition, and she gives him complicated directions as payback.

All in all, Potter is a corrupt attorney who will do anything to get what he wants and doesn't care what he has to do to get it or who gets in his way.

Potter started out as the lawyer of the Lenders, who have inherited a house from Mrs. Lender's aunt Mrs. Allabaster. When the property lease is being called into question whether the Lenders own the house or not, they stated that Mrs. Allabaster wrote a will that will prove their ownership. However, Mr. Potter seemingly states that he can't find the will and has already made plans to demolish their house in order to build condominiums on the land, and the Lenders have until Saturday to move away.

As Saturday hits by, the Lenders have moved away and Potter arrives at the empty house. It later turns out that Mrs. Allabaster never trusted banks and has hidden the will inside the house for her descendants to find, something which Potter deliberately kept from his clients. As soon as he finds the will (detailing the rightful ownership to the Lenders), Potter calls in City Hall to call in the demolition of the house. He then intends to burn the will, but Arrietty Clock (the protagonist of the film) and her brother Peagreen, two tiny people known as 'Borrowers' as they borrow stuff without being seen, recover the will, intending to save the house for both their family and the Lenders. Upon seeing the Clocks' underground home and believing that the house is infested, Potter calls in the local exterminator Jeff, who spays acidic foam into the wall, but Arietty and Peagreen escape from it. An impatient Potter asks Jeff how long will his job take, which startles Jeff so much he accidentally sprays foam in Potter's face and he screams in pain as it boils and bubbles on him. Jeff quickly removes the foam off Potter's face--though Potter loses his mustache in the process and his face is now left sunburnt red.

Potter then finds Arietty and Peagreen in the walls of the house and swings a hammer at the wall. Peagreen gets stuck on the claw of the hammer and is pulled out from the wall and flung across the room. He lands on a hanging light bulb and Potter tries to get him but can't reach. Potter swings the hammer at the lightbulb just as Peagreen manages to escape--leaving Potter electrocuted with his hair sticking straight up. He falls to the floor, and the hammer falls and hits him on the head.

Later, Potter demands Jeff to find the Borrowers, or "make him never work in this town again." Jeff introduces his secret weapon-- his bloodhound Mr. Smelly to sniff Peagreen's jacket and track down the scent to a milk factory, where Peagreen is stuck inside a milk bottle after a certain mishap.

During the way, they occasionally bump into the local police officer Oliver Steady, who starts to question Potter's actions regarding the Lender house. Around the same time, Jeff starts to question Potter's intention of killing the Borrowers after seeing how capable they are, resulting Potter to break off with him just as he is doused with liquid cheese by Arrietty and another Borrower named Spud Spiller. As soon as Peagreen is saved by his family, Potter finally arrives at the scene, steals the will, and straps the five Borrowers to the cheese machine, intending to drown them into liquid cheese as revenge for humiliating him. Spiller then insults Potter to the point where Potter dumps him into another machine, apparently killing him. Potter then heads over to City Hall to call for demolition, but not before he taunts the Lenders' son Pete (who is a close friend of the Borrowers) that the Clock family are about to be drowned in cheese.

As soon as Potter leaves for City Hall, Pete saves the Borrowers from being drowned by liquid cheese, and they head over to City Hall (with help from Jeff, who lends in his van to drive Pete there). As soon as Potter reaches City Hall, he is briefly stalled by the receptionist, who gives him confusing directions to the demolition area in response to his rude behavior. Just as he finally reaches the room, Jeff and Peter arrive to stop him. Potter responds by sending them down the elevator before going into the room, only to find out that it's just a stock room (Jeff has deliberately misplaced the 'Demoliton' sign on the front of the door) where the Borrowers trap Potter with Sellotape. Out of rage, Potter breaks away from the tape and traps the Borrowers, intending to suck them up in a vacuum. However, Spud (apparently having escaped the machine) arrives to the rescue by bringing an entire army of Borrowers who arrive to trap Potter by using wires and the ceiling fan. Arriety's father Pod then delivers a speech to Potter on behalf of the Borrowers, right before they leave as soon as the door opens. Pete, Jeff, and Officer Steady have arrived at the scene, where Pete recovers the will and shows it to Steady, proving Potter's deceit and his plan to cheat the Lenders out of their house. Having gone crazy about the Borrowers, Potter tries to explain his story, but an unconvinced Steady arrests him for fraud and theft.

With Potter's plans exposed, the Lenders moved back to their house while Pete remains friends with the Borrowers while keeping their existence as a secret. It is also implied that the Lenders are likely to sue Potter for deceit and fraud that he committed against them.

During the end credits, Potter is being seen at the police station trying to explain the existence of the Borrowers, only to be laughed uproariously at by Steady, the entire police force and even the convicts. The film closes with Potter's mugshots being taken, though he actually seems to enjoy it as if he were at a photography studio (most likely due to his sanity slipping from all he's been through). It can be implied afterward that Potter himself is disbarred from his job, and sentenced to either prison or a mental asylum for his crimes against the Lenders and Borrowers. 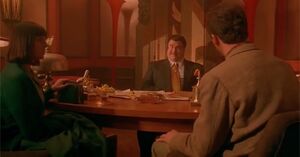 Potter tells Mr. and Mrs. Lender that their late Aunt seemingly never wrote a will for their house. 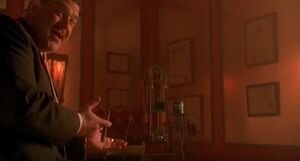 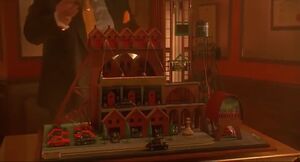 "24 highly expensive luxury apartments in the place of one house." 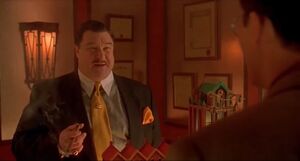 "You like it? Ya have till Saturday to move out." 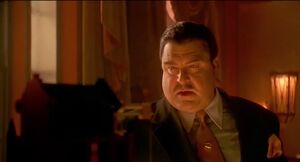 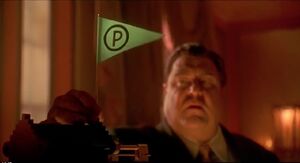 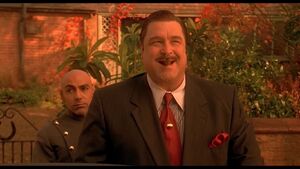 Potter smirks evilly as he arrives at the empty Lender house. 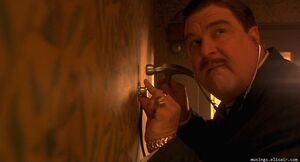 Potter looking for the will. 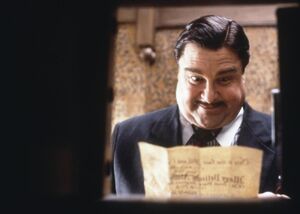 Potter uncovers the vault and the finds the will. 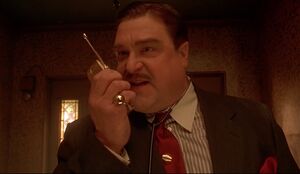 "I don't care if it is short notice! I want this house flattened, and I want it flattened today!" 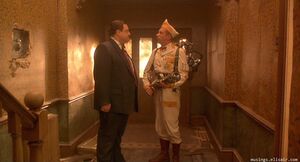 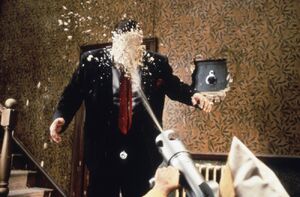 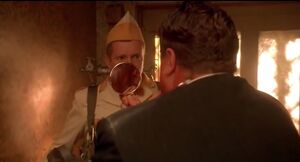 Potter horrified to see the foam ripped off his mustache. 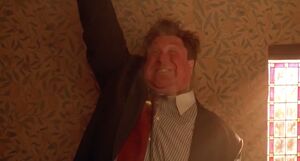 Potter electrocuted in his obsession to capture the Borrowers. 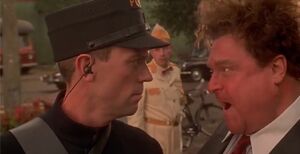 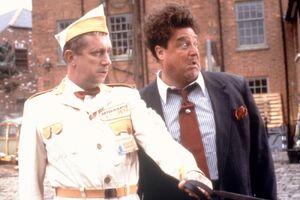 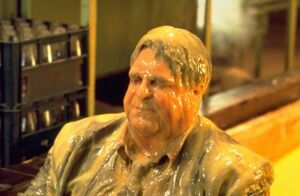 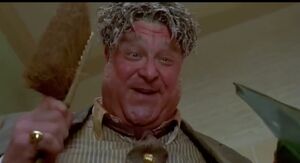 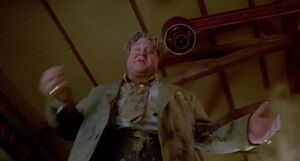 "You know, I'd love to stay and watch, but I've got a date with destruction!" 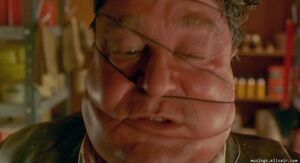 Potter caught in lines by the Borrowers. 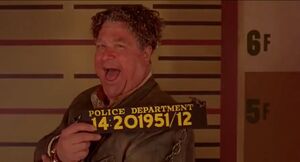 Potter taking his mugshots before being imprisoned.
Add a photo to this gallery
Retrieved from "https://villains.fandom.com/wiki/Ocious_P._Potter?oldid=3941954"
Community content is available under CC-BY-SA unless otherwise noted.