The Heroes of Olympus

Centurion of the First Cohort
Legacy of Apollo

Teenage Corrupt Official
Octavian is the secondary antagonist of The Heroes of Olympus. A Roman legacy, a descendant of Apollo, Augur at Camp Jupiter, and a Centurion of the First Cohort, he is an eighteen-year-old demigod who reads the stuffing of toy animals in order to see if a new demigod or legacy can stay at Camp Jupiter.

He is also very distrusting of Greek Demigods, believing that they are in league with their enemies. One time when a possessed Greek Demigod named Leo Valdez attacks Camp Jupiter, Octavian plans to get revenge and attack the Greek's camp, Camp Half Blood.

When Camp Jupiter's praetor Reyna leaves to meet with the seven demigods (Percy Jackson, Annabeth Chase, Jason Grace, Piper McLean, Leo, Frank Zhang and Hazel Levesque), Octavian goes against her wishes and plans to attack Camp Half Blood and takes the camp's legion to Long Island (where Camp Half Blood is based) and planned to attack the camp on 1 August, which was also the day the Earth Goddess Gaea was to rise.

He allowed a legacy of Orcus named Bryce Lawrence to rejoin the legion, despite being banished from Camp Jupiter by Reyna for killing his own centurion for fun.

Octavian ends up dying a hero after launching himself at Gaia, but dying on impact.

He appears in the books: The Son of Neptune, The Mark of Athena, The House of Hades and The Blood of Olympus.

In the first Trials of Apollo book The Hidden Oracle (which takes place six months after The Blood of Olympus), it is revealed that Octavian, along with Luke Castellan, was supplied funding by Nero via Triumvirate Holdings.

Octavian is a skinny eighteen-year-old with blonde hair with blue eyes and has a SPQR tattoo (which all demigods at Camp Jupiter have) with a lyre (the symbol of Apollo) and seven lines on it, meaning that he has been attending Camp Jupiter since he was eleven. He also wears a t-shirt with a white toga over it and jeans. 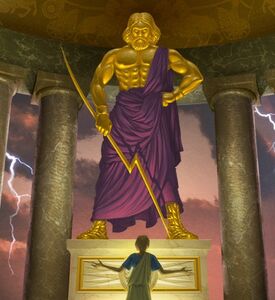 Octavian in the Temple of Jupiter Optimus Maximus.