Commander of the French Army

Conquer Italy with the help of Cesare Borgia (failed).

Octavian de Valois, often referred to as Baron de Valois, is a major villain in the videogame Assassin's Creed: Brotherhood serving as the main antagonist of sequence 6.

He was voiced by Arthur Holden.

50 years ago in 1498, Octavian's distant cousin Louis XII was crowned king. Following this, Louis XII assigned Octavian to lead his Italian campaign. However, Octavian had no real experience in war and just received formal training. Nonetheless, Octavian accepted the responsibility.

The following year, Octavian met Cesare and Juan Borgia the Elder at the French court. The latter two were there to court Cesare's future wife Charlotte of Albret. After spending a month together, Octavian went with the Borgias to Italy, thinking he'd be given Italy when they had have destroyed all opposition.

Cesare assigned Octavian with eliminating the mercenaries in Rome. They were led by Bartolomeo d'Alviano, who was secretly a member of the Assassin Order. The French troops attacked Bartolomeo's barracks and managed to capture his wife, Pantasilea Baglioni. Octavian promised to release Pantasilea, should Bartolomeo come into his camp unarmed and alone. Bartolomeo declined the offer and rode towards the French camp with fellow Assassin Ezio Auditore da Firenze. They discovered that the camp was impenetrable. However, Ezio devised a plan and retrieved some of the French soldiers' uniforms. Bartolomeo had his mercenaries and Ezio put on these uniforms and pretended to be captured by them. They marched towards the French camp and were given entry, as the guards were easily fooled. Once inside, Octavian attempted to kill Pantasilea nonetheless, at which point the mercenaries attacked. Octavian fled deeper into the camp with Pantasilea, holding her at gunpoint. Ezio followed him into the camp, though remained unseen. Octavian was killed by Ezio shortly after. 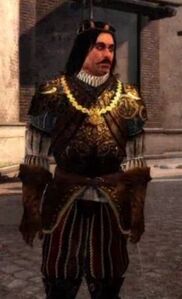 Retrieved from "https://villains.fandom.com/wiki/Octavian_de_Valois?oldid=4144798"
Community content is available under CC-BY-SA unless otherwise noted.