Make everyone fall in love with opera

Crime Lord
Don Octavio is an anthropomorphic lion and the main villain while the Cooper Gang was in Venice. He planned to destroy Venice by sinking most of its landmarks but the Cooper Gang intervened and he is currently doing time in prison.

As a child, Octavio was in a world of fame, described as being popular in the neighborhood and famous for his singing. However, just when he was about to reach fame, music taste changed and opera was no longer popular, much to his dismay. With not much left, he held onto a few fans (members of some sort of mafia who recruited him into "the business") and then became an associate with a man known as Giovanni.

With the help of Giovanni, Octavio rose to the rank of a Don, becoming known as Don Octavio. Despite being a powerful boss, he had big plans to redeem opera in the streets of Venice. It apparently took several months to prepare. With the help of Giovanni, he secretly began pumping tar into the streets of Venice. The Venetian police caught on and Carmelita had to look into it, believing Don Octavio to be a prime suspect. Surprisingly, the Guru also knew of the pollution in Venice and spoke of it to Murray, telling him not to return until he'd made 'the black water run clear'. Sly and Bentley caught up with Murray and realized that Don Octavio was behind Venice's tar problem. As Octavio went around pumping more tar into the streets of Venice, he was secretly being photographed by Sly, so the Cooper Gang had evidence to have him thrown in jail. However, this effort was futile as Octavio had men on the inside of the police station and they picked up the photos which led to Octavio working out that the Cooper Gang was behind it. In order for his plot to work, he needed to take care of one of his biggest threats, Carmelita, as she was apparently trying to receive a warrant to search his opera house which would be a critical blow in his operation. He hired the 'Blue Viper Gondola' gang to take care of her but Sly and Bentley caught wind of what was going to happen and saved her life. They also took out his Ferris Wheel (which was being used to pump tar with the help of Giovanni).

Though the Cooper Gang had thwarted some of his operation, Octavio's plan was nearing its final stage and all he needed to do now was to advertise his upcoming opera recital. If the public didn't show up at it then he would sink the buildings in Venice until they agreed to his demands. The Cooper Gang attempted to take out his advertisements which gave Octavio the chance to confront Bentley and capture him. Sly chased Octavio across Venice until Octavio, realizing he couldn't shake Sly off his tail, threw Bentley at him, then fled inside his Opera House.

After this, the Cooper Gang managed to steal Octavio's Tar Pump Blueprints that he'd hidden behind paintings in three of his coffee houses. Realizing that his normal patrol wasn't enough, Octavio hired additional back-up who were similar to normal guards except with jetpacks. Sly and Bentley couldn't fight them head on and had to manipulate Carmelita and her mercenaries to take them out. After that, Bentley convinced Murray to take to the field and take out some of Octavio's tar pumps.

When the day of the Opera Recital arrived, Octavio was tricked into destroying his remaining tar drums by a disguised Sly, though it didn't matter as Octavio had already pumped out enough tar to start sinking buildings. Octavio then took to the stage but no one had shown up at the Opera Recital other than Bentley who challenged Octavio to a 'sing-off' which was just a scheme to swipe the controls to sink buildings out of Octavio's hand whilst Sly dropped a chandelier on Octavio's head.

As the sing-off reached its climax, Octavio moved closer to Bentley in a plot to kill him, but Bentley shouted "now!" and Sly dropped the chandelier on his head, Octavio stood in a state of shock. Unfortunately, Carmelita destroyed the chandelier and informed Sly, Bentley and the Don they were under arrest. One of Octavio's underlings pulled up in a gondola and Octavio quickly jumped in and escaped, followed by Sly and Bentley. As the chase continued in the waters of Venice, Octavio began to bomb the waters, in an attempt to shake off Sly and Bentley's gondola. Eventually, Octavio's gondola engine failed and he and his underling crashed into the stage, resulting in his underling's death. Sly and Bentley pulled up on the bank next to it and confronted Octavio, telling him to give them the demolition switch and then they'd all ditch the cops. Octavio first agreed, but when Murray said it was "so cool" that Octavio's gondola crashed into the opera stage he began sinking buildings. Bentley, infuriated by this, moved in closer to Octavio claiming him to be a monster, only to be kicked and sent flying. Sly backed up and asked for the help of Murray, who was on a rooftop above him. Octavio began to taunt Murray as Bentley asked for help. Murray leapt into battle and began fighting Octavio. Despite putting up a good fight, Octavio fell at the hands of Murray. Sly and Murray left him knocked out for the police to deal with then helped Bentley up from the floor. Octavio was left exhausted and captured by Carmelita.

According to Sly, he was sentenced to up to thirty years in jail. Ironically, he regained his long-wanted fame as most of his old fan base was already imprisoned. 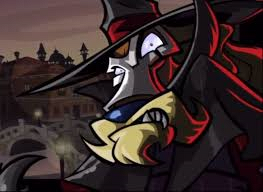 Octavio with his Don get-up.